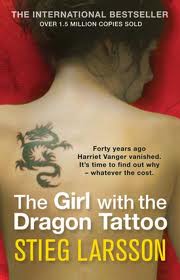 Producer Scott Rudin and director David Fincher are taking steps in finalizing the principal cast for the Hollywood remake of The Girl With the Dragon Tattoo. The recent acquisition of gems Robin Wright (formerly Penn) as Erika Berger, and Swedish actor Stellan Skarsgard as Martin Vanger to the team, has given rise to hope for this film. With Steven Zaillian (Schindler’s List, Gangs of New York) on as screenwriter/adaptor working in collaboration with Author Steig Larson, it seems this story may stand a chance at not becoming another novel series defaced by commercialized film adaptation. Personally I really enjoyed a lot of the cinematic and narrative elements of the original, and it seems many people agree as the first film has grossed some $100 million internationally. The success of the Swedish production leaves many wondering…why make it again?  But it is clear that Sony Columbia Pictures has plans to ride and prolong this popularity wave by adding big audience pulling stars like Daniel Craig (as journalist Mikael Blomkvist) to the mix.

The highly anticipated role of Lisbeth Salander still eludes the grasp of many hopeful actresses such as Ellen Page and Emily Browning (Sucker Punch). It is rumored that Rooney Mara’s work with Fincher on his Facebook feature The Social Network, has put her at the top slot for casting. The whispers that Natalie Portman is being considered are false and have been denied by Portman herself at her Comic-Con Thor panel. I’m rooting for Ellen Page, and anyone who has seen Hard Candy I think can understand why. She has already proven herself capable of embodying the themes of extreme feminism and poetic justice that are so essential and prevalent in “The Girl With the Dragon Tattoo”.

Speaking to a desire to keep a culturally authentic look and feel to the film, Fincher has reportedly stressed Swedish accents on the cast, a decision that could greatly effect the Lisbeth selection as well. In addition, Skarsgard, in an interview with Variety, claims that most of the production will take place in Stockholm Sweden, with minimal U.S. studio work.

Looking forward, we can expect to see a Hollywood attempt to adapt the second two books of the millennium trilogy “The Girl Who Played With Fire” and “The Girl Who Kicked the Hornets’ Nest” with Fincher directing and possibly Daniel Craig still attached.