Last night we saw the finale of the second season of the brilliant HBO series Girls. Creator Lena Dunham receives a lot of backlash for her use of full frontal nudity and the show in general but Girls is one of the best television shows around right now. Yes the characters aren’t always likeable and the story lines don’t always follow a neat A to B to C progression, but Girls is smart, honest, funny, innovative, and really captures the essence of growing up and dealing with certain awkward situations. A lot has changed for these characters in the show’s sophomore year and this season has been filled with a number of confusing, disturbing, and hilarious moments. Here is a recap of some of the most bizarre and memorable scenes of season 2 and why they work. 10) Worst – Reunion No. 1
One of the things I like most about Girls is the way it explores break-ups. Normally, a show or film will depict the person who got dumped as depressed and the dumper will have the upper hand. Not in this case. Hannah’s mental state declines as she struggles to identify herself and Marnie loses her job and has the ‘worst year of her life’. When Marnie and Charlie broke up, I imagine a number of people were on his side and were happy when it was revealed he had found success. The fact that Marnie actively stalks him when she discovers he is rich and successful is just one of the many things wrong with this reunion. Though it will be interesting to see what they do with their second try at this relationship in season 3, I suspect an annoying on again, off again dynamic. 9) Best – Reunion No. 2
Fan girls rejoiced as the season finale saw the reunion of both Hannah and Adam as well as Marnie and Charlie. Although the foursome are equally annoying, messed up, and unlikeable at times, you can’t help but feel content when Adam and Hannah reunite. The build up is adorable and extravagant for someone as messed up as Adam and after a season that focused on how they failed to cope apart, this moment is sweet and works as a perfect ending.

8) Worst – Marnie and Booth Jonathan
After Jessa and Thomas-John, this is probably the second stupidest pairing as the whole ordeal makes Marnie even more annoying. We were first introduced to pretentious artist Booth Jonathan back in season one and his introduction led to Marnie running to the toilet to masturbate, so it was inevitable when her and Charlie broke up that something was going to happen between Booth and Marnie. Watching an unlikeable character like Marnie experience his claustrophobic installation was somewhat pleasing; their weird sex including a doll, however, wasn’t. It was also painful to watch her delude herself into thinking they were dating.

7) Best – Ray and Shoshanna express their feelings
One of the show’s most unexpected pairings was Ray and Shoshanna, but the beginning of their relationship felt oddly sweet. Ray is a highly unlikeable character whereas Shoshanna is pretty amazing, so the audience are left feeling a little conflicted. When we see an unlikeable and bitter character such as Ray show some real emotion it’s a nice surprise. Who knew he was capable of an emotion such as love?

6) Worst – The Q-tip
It’s extremely hard to watch a protagonist suffer with her mental state, whether you like her or not. With stress increasing, Hannah reverts back to her OCD habits from college and this is by far the most distressing habit of hers to watch. However, the doctor that sees her at the hospital is fairly amusing. 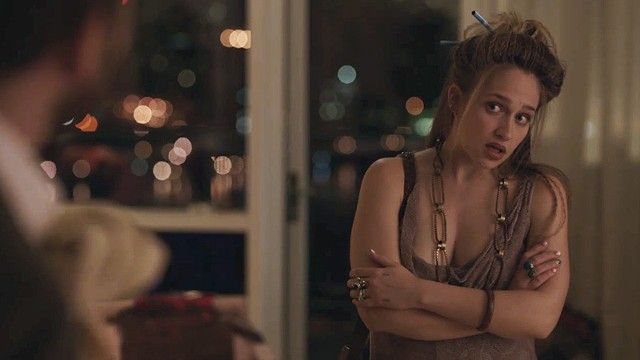 5) Best – The departure of Thomas-John
It was only a matter of time before this break-up fight would happen, as Jessa and Thomas-John’s impromptu marriage felt impulsive and foolish. Following an extremely awkward dinner with his parents, the couple engage in a heated argument where insults are thrown back and forth. It’s an interesting scene and the dialogue is simply fantastic. It’s also great to see Jessa get angry and punch him after comparing her to a whore with no work ethic.

4) Worst – Marnie covers Kanye West’s “Stronger”
After stalking her now successful ex and coercing him into inviting her to his company’s party celebrating a recent success, Marnie decides to showcase her new-found talent. This is without a doubt the most cringe-inducing scene this show has ever produced. However one good thing did come from this scene- Parks and Rec‘s Rhetta producing some hilarious tweets.

3) Best – The Bath Scene
Jessa hasn’t received much air time this season but when she does she is always great. Throughout the show’s duration she is depicted as a wild, free spirit with no feelings or awareness of consequences. Fresh from her break-up with Thomas-John, Jessa surprises a bathing Hannah and gets in the tub with her. This is the first time we see Jessa express any kind of real emotion and it’s a sweet moment they share. When she disposes of her snot in the water and Hannah laughs, the audience are reminded of how close they really are.

2) Worst (but also best) – Adam sexually assaults his girlfriend
This is probably the most uncomfortable and disturbing scene Girls has ever achieved. Diving head first into a new relationship, Adam’s intense quirks are on full display in the penultimate episode of this season. After running into a mentally unstable Hannah, Adam decides to binge drink again on a night out with his new girlfriend, Natalia. A scene with intense red lighting of the two of them dancing works as an indication that something bad will follow. When they get back to his place, Adam orders her to crawl to his bedroom and proceed in some uncomfortable sex. This is a very dark scene for the show but also an excellent one. With the previous episodes becoming a little weak, this scene reels the audience back in and reminds us exactly why we watch the show.

1) Best – Hannah and Elijah try cocaine
Hannah and Elijah’s relationship is probably one of the strangest the show has seen. At the beginning of season one, Hannah was reunited with Elijah and accused him of giving her an STD. At the beginning of season two she moves in with him instead of her current boyfriend Adam, and it seems to work for the pair of them. Hired to do freelance work at an absurd, “trendy”, VICE-style magazine, it is suggested that Hannah has a threesome with some guys off Craigslist or “do a bunch of cocaine”. She chooses to do cocaine with Elijah and hilarity ensues. It’s always risky exploring the use of drugs in a television show as it can come off as too over the top or too gimmicky, but the fantastic Lena Dunham and Andrew Rannells find the perfect balance and give one of the best comedic performances in recent memory. This episode also sees one of the best one-liners the show has had: “It’s a Wednesday night baby, and I’m alive!”