The second part of Mr. Freeze’s storyline really heats up the drama of Mr. Freeze’s plight, as it perfectly parallels the themes of obsession that have also affected Gordon, while also servicing to build on plot points for other characters and their arcs.

The main theme of “Dead Man” is obsession and how oblivious it makes the people sucked up into it to the damage around them until it’s too late. This story is particularly reflective of Lee’s situation, as she sees Gordon getting consumed by his obsession of cleaning up Gotham City at the cost of his soul. He has been lying to her about his involvement in the death of Galavan, as was made clear in the previous episode (a beat that seemed a bit glossed-over considering how Gotham has shown Lee to be a bold and perceptive character). She’s called him out on it before many times before, but in recent episodes she’s been almost complicit. Lee had seen the signs that Gordon was keeping secrets, but has been allowing her love for him to blindside her better judgement. Nora’s warnings to Lee on this topic come from experience, as her story with Mr. Freeze makes plain. Some of the best moments in Gotham are the conversations between Lee and Gordon as they try to reconcile the actions taken amid recent events. Ben McKenzie and Morena Baccarin are both really great at pleading their side with the right emotion that makes both sides sympathetic.

Gotham has also done excellent work bringing Mr. Freeze into live television in a way that doesn’t bring to mind the cheese of Batman and Robin or the camp of the original Batman 1966 TV series. Instead, this depiction comes closer to Paul Dini’s revamp of the character in Batman: The Animated Series, where the tragic Nora plot thread was first introduced. The story is told vividly, as is the evolution of Mr. Freeze in this Gotham version. The traits that have always been associated with the character are the clear dome mask, the bald head, and the ice gun, and these recent episodes shows us the whole process that gets us to that familiar look. It begins with an overcoat with a hood and white-rimmed goggles holding his ice gun, and then he changes into a hockey-padded, bulky suit which hints at the dome helmet with a visor-like cover. The final look comes together after his demise and rebirth, where he has bluish and protruding veins on his skin and blinding white hair, instead of being just plain bald. The Mr. Freeze at the end of the episode will surely need the body suit and dome head when he makes his post-Indian Hill debut.

“A Dead Man Feels No Cold” is an exciting and chilling episode that melts hearts with the tragic tale of a man who transforms into a monster trying to keep his ill-ridden wife alive. Gotham continues to deliver solid stories and adapting from the comic books with great success, while also building on the ongoing Bruce to Batman arc in ways that are entertaining and revealing. 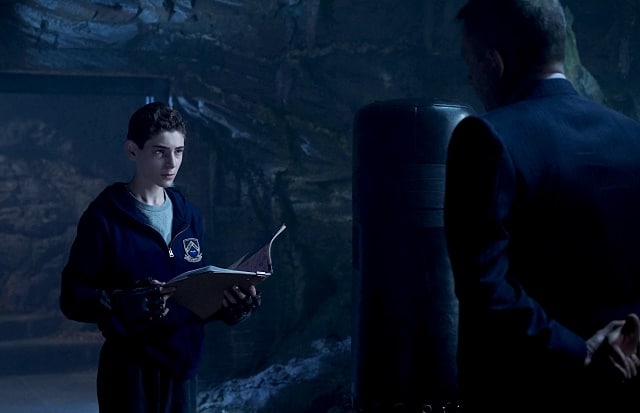 Bruce Wayne is back this week after being sent away to Switzerland for some regrouping after his abduction by Galavan. This explains why Gotham did not touch base with Bruce in the previous episode and it’s a well they often go to, which is fine, although it might be interesting if some day they decide to do an “untold tales” chronicle of what he did abroad on these globetrotting expeditions, especially if it has something to do with him gaining a new skill that will aid in his becoming Batman.

What we learn in Bruce’s conversations with Lee, Alfred, and lastly Cat, is that Bruce plans to kill Patrick “Matches” Malone, the man who murdered his parents. The reveal of this development is handled nicely, with first his talk to Lee displaying a duality of mind, wanting to be honest while realizing that he needs to be secretive to push forward on his obsessive goals. Here Bruce is learning how to maneuver his principles to fit his need for revenge. Alfred, meanwhile, is at this point simply someone that Bruce lies to because he has become an obstacle. Cat is Bruce’s most straightforward conspirator and even she can see that Bruce, though he is changing, may still not be up to the task of committing murder.

Things are not going so well for The Penguin over at Arkham Asylum as he has been handpicked by Professor Strange to be the subject of his “rehabilitation” program. It seems to be a program intent on disintegrating The Penguin’s evil tendencies (and his mind) into mush. The Penguin is our entry into what is going on over at Arkham Asylum and there is certainly some evil-doings happening that go far deeper than what we learned about from when Gordon had worked there. The Penguin’s goal was to save himself prison time by pleading insanity, but that hasn’t panned out, and now we find him pleading for help from Gordon, and playing the Galavan card on him to boot. Not sure what will become of The Penguin under the Strange program, but it may bring some interesting development as he appears to have been cured. 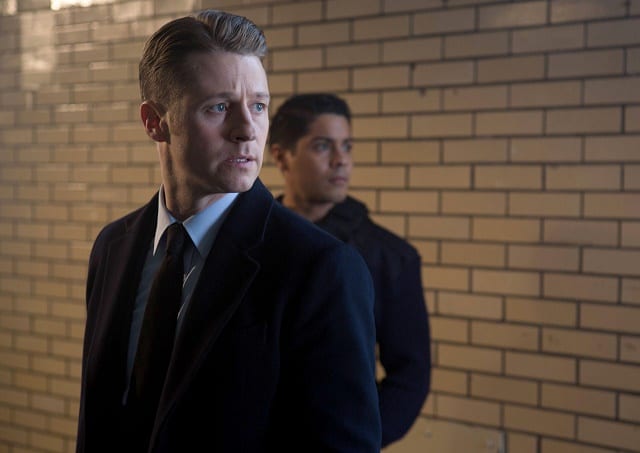 The case starts off with Gordon and company finding a bunch of cops who were iced by Mr. Freeze while he restocked on some of his much-needed supplies, where they learn that he wants his wife freed. This isn’t the strongest of premises for a case. but it works to get the ball rolling in that we get to see Captain Barnes go off on Mr. Freeze’s reckless disregard for human life. The plan that ensues involves the GCPD using Mr. Freeze’s wife, Nora, as bait to lure him into their trap. Things get complicated when Professor Strange learns of the plan and devises has a plan of his own to get his hands on Mr. Freeze’s formula for reanimation. There could have been other ways to get the formula into Professor Strange’s hands but this way shows how far Strange is willing to go in order to get his way. By episode’s end, Professor Strange has Mr. Freeze in his grasp and there is sure to be some exciting collaborations to come from these two.

Mr. Freeze’s story is greatly improved in this second part due to its being allowed to really dig into his emotional ties to his wife and how his love for her feeds into his obsession to try and keep her alive. We see Nora talk to Lee in several instances where we get better insight to Nora’s side of the story and how deeply she loves Mr. Freeze. Nora also learns about the awful things her husband has done in her name but still loves him and appreciates his loyalty to her which she repays him by being unwilling to work with the police to give him up. The story ends tragically when Nora realizes that it was their love and his inability to let her go that was making him into the monster he is and so she decides to make the ultimate sacrifice. She switches out the cartridge with the correct formula for one that would instantly kill her. The devastation is strongly felt through the performances of both actors in their final scenes together. Kristin Hager is very empathetic in her scenes with Lee, as much as she is with Mr. Freeze. Nathan Darrow as Freeze really shines when he discovers that the cryogenic formula was the wrong one and that she is falling apart like a porcelain doll by his own hand.

“A Dead Man Feels No Cold” is written by newcomer Seth Boston, who is possibly makes his credited debut with this episode. Boston’s strength is in smart dialogue with a strong sense of character. The theme of obsession ties Gordon’s story in parallel with Mr. Freeze’s as well as young Bruce’s. The direction by Eagle Egilsson is remarkable, as it often is on Gotham. The scene where the Penguin is “mind tortured” has a cool and effective transition sequence, and the excellent moment when Nora is frozen by Mr. Freeze deploys a smart use of lens flare. The scene is heightened by the musical themes that recall the snowglobe music emblematic of the original Paul Dini story. The production team does a great job making Gotham be grim yet beautiful as displayed with the frozen cops and the presentation of Mr. Freeze’s ice bomb, with horrifying icy shards exploding out of the dead victims.

Gotham continues to be gruesome and stunning with its gritty style and spectacular visuals, and it appears that it will only get better as the season begins to deal with bigger and bolder villains.