Perhaps Vinyl has regained its footing. The first three episodes of the series were filled with drama – Richie falling off the wagon, murdering Buck Rogers, and threatening his already shaky marriage. The episodes were all filled with moments of inspiration and an exhilarating manic energy, but by last week’s episode the show was starting to feel a bit ragged and worn down. It pulled in different directions, seeming more like a collection of vignettes than a unified vision of the music business in the mid-1970s. “The Racket” doesn’t reach the heights of the first couple of episodes, but has an airy lightness that’s new to the series. This week, Vinyl goes from being periodically intriguing and infuriating to actually being fun.

The episode opens on Buck Rogers’ funeral, but the focus quickly shifts back to Richie and his more immediate problems. Devon and Richie have started doing a form of couples’ counseling, but it’s clear that their talk past each other (or screaming). Richie misses the funeral for his session, but it’s not clear if that’s a sign of him putting more effort into his marriage or just him trying to run away from his troubles. When he makes it into the office the whole day is devoted to kowtowing to Hannibal, a Sly Stone sound-alike. Women, booze, cocaine, insincere greetings, whatever it takes to get Hannibal to renew his contract with American Century. Richie’s efforts may all be in vain, though: Jackie Jarvis (Ken Marino), one of Richie’s sleezy competitors, is waiting at the show to sweet talk Hannibal. 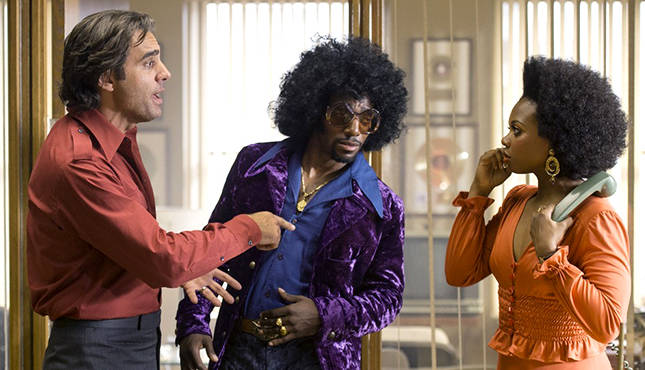 While Richie romances Hannibal, Jamie tries to keep the Nasty Bits calm as they are repeatedly ignored. They’ve come in to sign their contract, but Richie keeps them waiting all day. While they’re waiting, Richie manages to find time to meet with Lester. Rather than release the old tapes the he recorded years ago, Lester sets them on fire and throws them in the trash. When Lester spies the Nasty Bits on the street later, he decides to escalate hostilities with Richie and gives the band a short lesson on record contracts and royalties. By the time Richie finally deigns to see the band, Lester has become their manager and negotiates with Richie for a better deal. Even as the two men argue, a playful undercurrent emerges. Lester took the job to annoy Richie, but he wouldn’t care about annoying him unless a certain amount of friendship still existed between the two men. But even after the relative lightness of his sparring match with Lester, Richie has to come back to reality eventually. He’s caught off guard when two detectives come to talk to him, but even more so by the fact that they know he was the last person that Buck Rogers phoned before he was killed.

In addition to being fun, “The Racket” is lightened by its moments of humor. There’s some great physical comedy when Richie has to murder a pillow with a tennis racket as part of his couple’s therapy (perhaps a parody of the primal scream therapy than John Lennon and Yoko Ono did?), as well as when Lester sets off the sprinkler system with the burning tapes. The episode also deals with race issues in a more nuanced way than previous episodes; instead of having a character blurt out something racist, the terminally uncool employees of American Century desperately try to act hip around Hannibal. This is also the first episode that finds a way to use the Nasty Bits. Juno Temple is still underused, but the band finally fits into the storyline. Devon also has little to do in this episode except scheme against Richie; hopefully that’s just an anomaly and that show isn’t planning to shove its female characters to the side again.

It’s still relatively early for Vinyl, and the show hasn’t quite figured out what it wants to be yet. But if “The Racket” signals a new direction, the show may have just found the right groove.