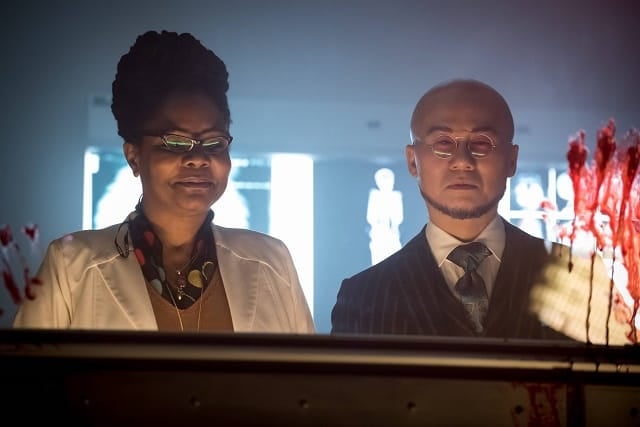 The resurrection of Galavan as Azrael promised to shake things up on Gotham as it now barrels forward into its final episodes before the season finale. The season has been diving deep into the hero’s journey in its second half with a various moments of brilliant displays from some key villains, but with last week’s “Pinewood” the scene has been set for the final conflict to center squarely with our heroes taking on the big bad of Professor Strange. The first obstacle that Gordon and company are faced with is the resurrection of Galavan who now goes by the name of Azrael.

After Gordon cleared his name he’s been on the path of redemption and he’s decided that in order to cleanse his soul he needs to keep the promise he made to Bruce, and that is to find the Wayne Murderers. One of the more notable plot points that was brought up in “Pinewood” that implied that Bruce had reverted to seek out vengeance against Professor Strange is addressed here and dealt with properly. When Bruce suggests to Gordon that they deal with Professor Strange the same way they dealt with Galavan, Gordon responds that that course of action will come with consequences. Gordon knows from experience that having killed Galavan has ruined his life in many ways and it’s good that the Gotham writers show Gordon has not only learned from his hot headed decisions, but also is deeply regretful of his actions. This also helps in showing how Bruce may be tempted to go darker, yet he is kept pure by not only his own good nature but also from those around him.

It’s always fun to see how Gotham handles early episode exposition and we get that in this episode through Gordon’s interrogation of Professor Strange. Gordon lays what he knows about Strange out on the table, and that he suspects him of being involved in the Wayne Murders, a fact that Gordon may not want to let out of the bag before he can find some hard proof. But this is Gotham and Gordon is a cowboy who may not always have a plan, but he knows he’s going to get his man no matter what. The best part of this sequence is seeing Ben McKenzie perform against BD Wong, who continues to be an exceptional villain. Wong’s vocalization alone is intense and compelling, you can watch this performance all day.

“Azrael” is another fine entry into the season that bring up some good ideas and even better action and sheds light on a potentially highly entertaining closing conflict between Gordon and Professor Strange. 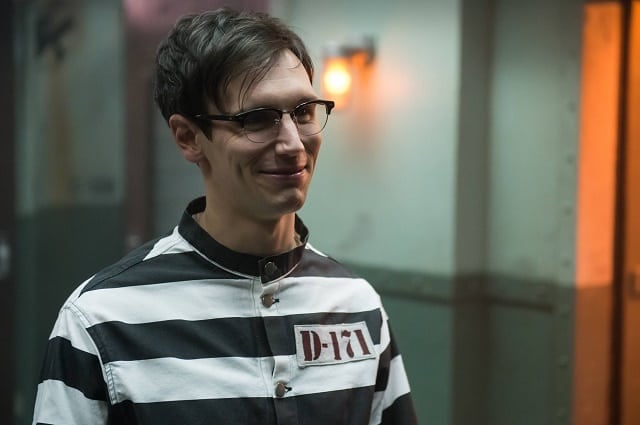 The story of Ed Nygma could’ve easily have ended with him getting arrested by Gordon and sent to Arkham Asylum, but luckily Gotham had more plans for him. Now that the cat is out of the bag about Nygma and his villainous ways we get to have him be more out and in the open with his cleverness which is a great move for the character. Nygma really shines when he’s spouting exposition like an evil Sherlock Holmes to explain how he fooled us all and he is put to good use his interactions with the criminals in Arkham Asylum. It appears that Nygma has figured out how to survive within the Asylum and taken well to it, much better than The Penguin did during his time there. It’s clear that his genius will make his release from the Asylum a much more fun and interesting one. Cory Michael Smith continues to display Nygma with incredible likability as he moderates conflicts within the hospital. t’s a pleIasure to watch him work out his brain in these sequences, such as when he’s finding the hidden elevator. It’s very comforting to know that the writers seem to have found more interesting applications of the character here and likely in episodes to come.

The goings-on over at Arkham Asylum are getting more and more interesting and promises to bring in more exciting villains. Professor Strange has figured out how to resurrect the dead and more importantly how to manipulate them. Strange has figured that he needs to install personas into his patients to ante up the criminality of Gotham City to an even greater level. The question to ask though is why is he doing this? The answer may simply be that he is insane and want to see how far he’s able to push the psyche of his patients but there may be an even better explanation, one that goes as far back as Pinewood Farms, as it is revealed in this episode that even there he had been attempting to resurrect the dead. 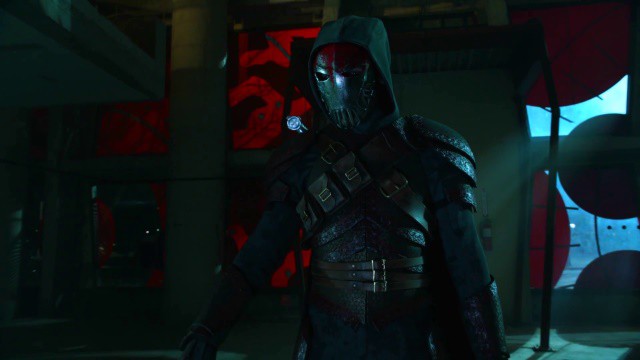 Ever since the revelation that the character of Theo Galavan had a secret surname of Dumas, the implication that he would have ties with the comic book character known as Azrael. The way Gotham has utilized his conception on the series is both well done and encouraging for what is to come and what could come. The creative engine that is the conceit of Professor Strange experiments have been intriguing from the outset, but having the resurrection program stem from Mr. Freeze’s origin as a way to speed up the process is very clever. The brilliance of having Galavan be resurrected as Azrael comes with the clear metaphor that Galavan’s death has haunted Gordon ever since he committed the act of murder, and having him physically return to create more havoc is really interesting. While the fact that Galavan is alive again doesn’t fully absolve Gordon of his wrongdoing, it still resembles that he needs to face what he did and deal with that issue before he can put it away for good.

The return of Galavan also has more implications for those who have connections with Galavan, as there are many. There seems to be an arc developing that Galavan may be seeking forgiveness from Tabitha as well as in his ramblings he mentions his sister. There are also those who are interested to secure his death such as the Penguin, who will more than likely be an interesting obstacle in bringing in Azrael.

Another dynamic duo writing team up this week, this time with Jim Barnes and Ken Woodruff. They worked pretty well together creating a narrative that was seamlessly singular. The ideas presented were well displayed with a variety of well-done dialogue that were aided greatly by the cast. “Azrael” adds another new director to its roster with Larysa Kondracki, whose other TV work includes Better Call Saul and The Americans. Kondracki does a great job following the formula of Gotham with an excellent montage of Ed Nygma discovering the hidden elevator with great use of the song “I’m looking over a four leaf clover” by Mitch Miller and the Gang. Another way the director stands out is her use of lens flare that adds a nice visual flourish that is interesting that adds nicely to the action.