Grim Dawn has quite a history. In April of 2012, about a month before Diablo III would release to excitement, skepticism, and dismay, Crate Entertainment quietly launched a Kickstarter campaign for their game to a horde of hungry fans. Many were upset about Diablo III’s visual and tonal changes from its predecessor, and would go on to be even more frustrated by a streamlined character progression and a lackluster story. Path of Exile had already become the refuge for a number of these disenfranchised fans, while others continued to wander, looking for home.

Grim Dawn was, for many, an easy choice. It nearly doubled its modest Kickstarter goal of $280,000. The game promised a grittier dark fantasy theme, and an old-school experience that would gently evolve the formula rather than try to reinvent it. The end result, now four years later, is a solid action RPG with a huge wealth of content for a bargain price.

Players take on the role of their choice of male or female persona, a character who finds themselves at the end of a noose at the game’s outset, possessed by an otherworldly entity known as an Aetherial. After the spirit leaves their body, they’re saved from the gallows by being volunteered into the service of a group of survivors inhabiting a nearby prison. From there, they can earn their keep and earn the trust of their new benefactors by doing the monster-slaying dirty work you might expect. 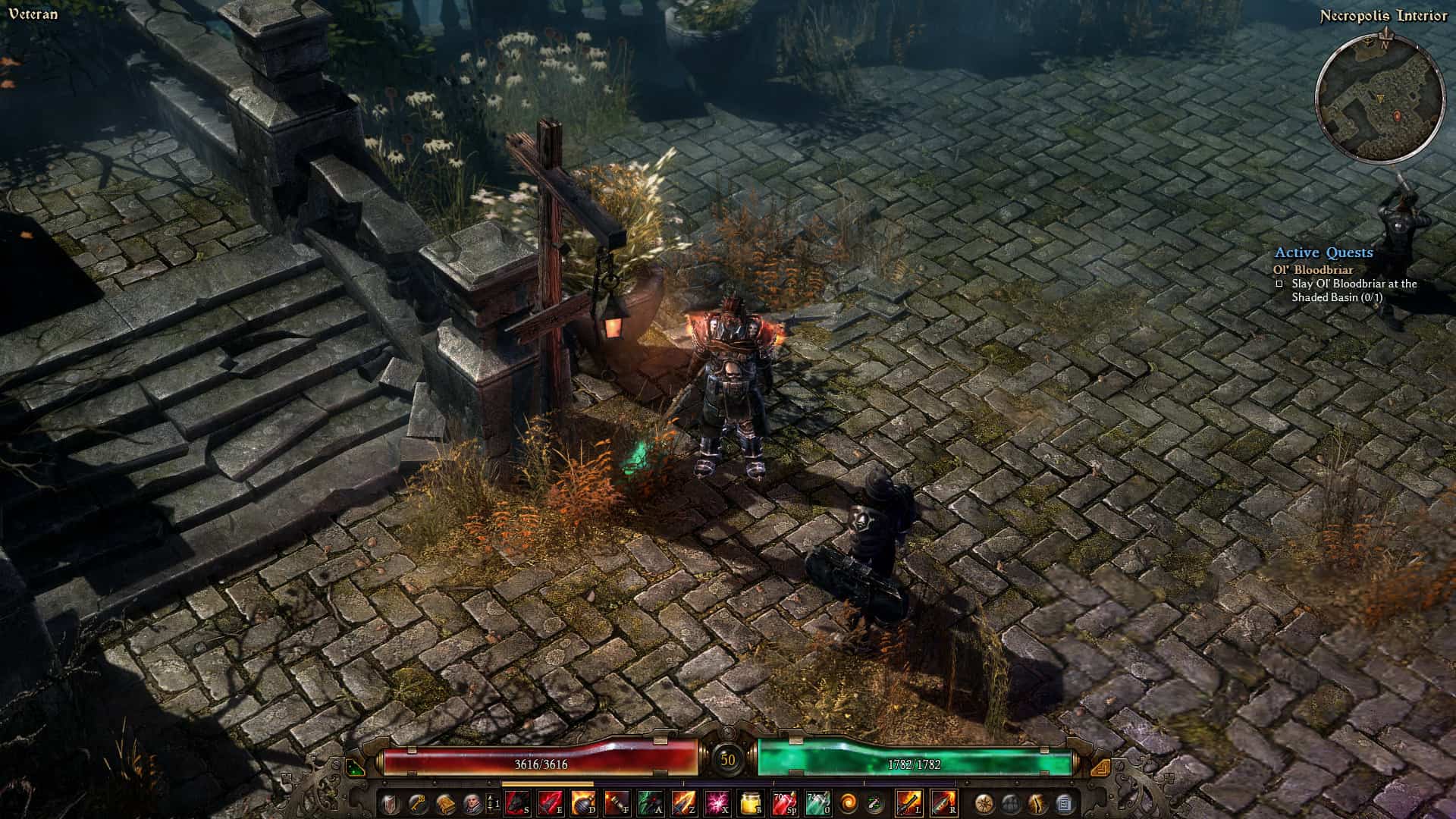 While the plot isn’t anything to write home about, considerably more effort was put forth than might have been expected. The world is well realized, with lost civilizations that current groups trace their ancestry to, interesting historical information relayed by talkative NPCs, and some decent character stories thrown in for good measure. None of it will take your focus away from the action for very long at a stretch, but it’s nice to see that care was taken to give the adventure context. It’s a shame that the voice acting, and occasionally the editing, don’t do the writing justice.

The overall audio presentation fares better than the cast, with a satisfying assortment of explosions, gunshots, and magical energies laid over an atmospheric soundtrack that manages to evoke Diablo II at every turn without feeling overly derivative.

Visual effects up the ante even further. The game engine could stand to be slightly better optimized, but Grim Dawn is almost never boring to look at. The environments are generally appealing, and even the more mundane areas quickly fill with light and color as you wade into battle. Even a newer PC may face some framerate drops and other hitches, as the game sometimes uses large numbers of enemies simultaneously (I killed over 25,000 in my first run, if the Steam achievement is to be believed), and when all of those enemies are also subject to visual effects from curses and attack spells, things can get more sluggish than seems reasonable. 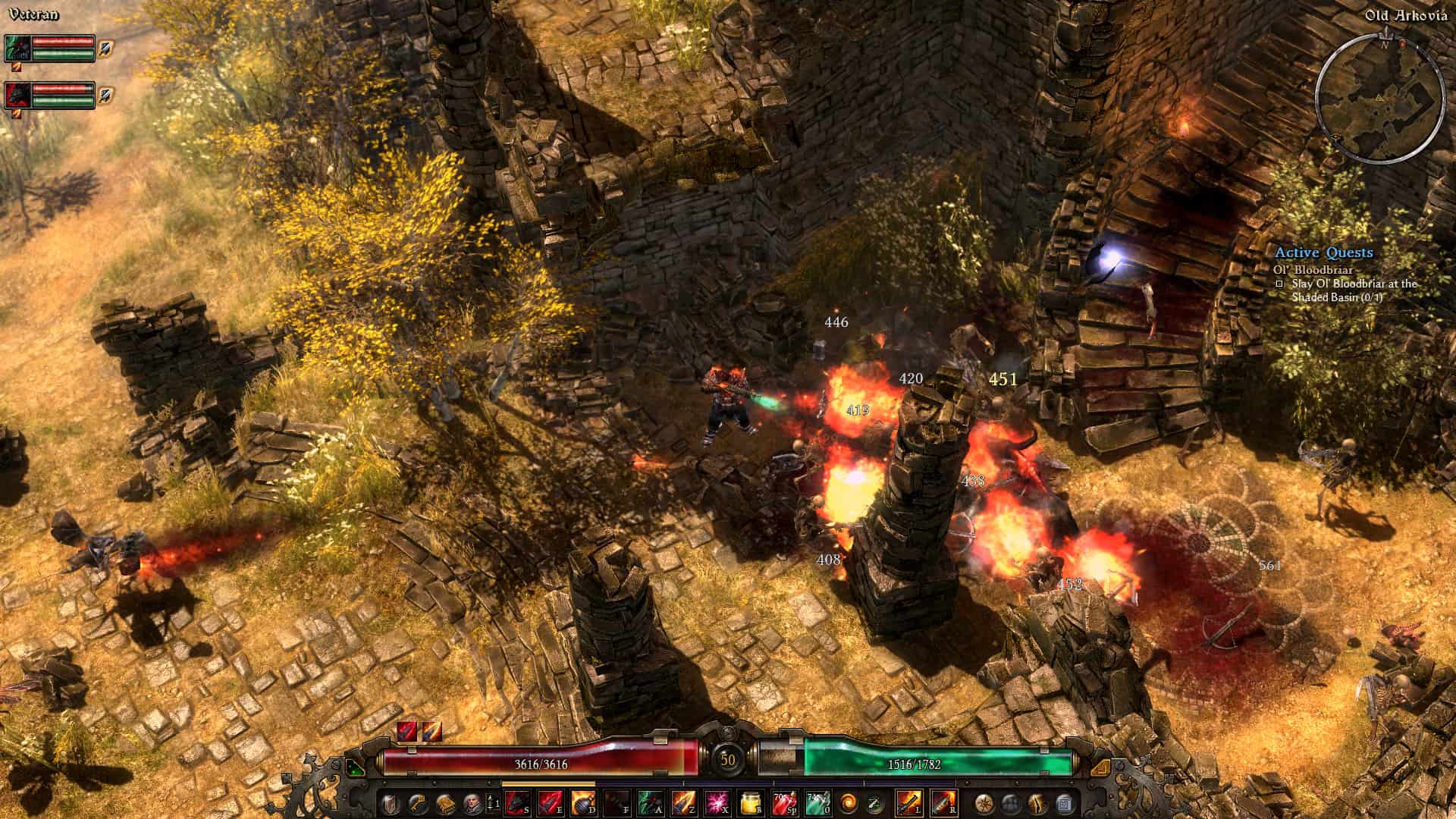 Ultimately, however, Grim Dawn’s various elements come together to deliver a welcome atmosphere for a substantial campaign, and character progression is thankfully no less colorful. Players may choose from one of six different masteries, or classes, each of which features their own unique skills and skill tree upgrade paths. What’s more, any character that reaches level 10 can select a second mastery, thus creating a dual-class character. A Soldier, for instance, can also delve into the Nightblade mastery and become a Witch Hunter. A Shaman can take on the Demolitionist mastery to become an Elementalist.

The six classes represent the general expected archetypes with some unique twists, and their combinations allow one to get really creative about character progression. More than that, since characters can be upgraded in different ways, two characters of the same combined masteries will likely end up feeling wildly different from one another as well.

Quests have less variety. Goals always boil down to variations on “go here, kill this,” and enemies are the usual loot piñatas, including heroes and bosses with greater HP reserves and more devastating attacks. Sadly, too much of the loot they drop is too random to be useful, and reading through numerical modifiers on 10 different items after a battle can be irritating. Loot filtration options mitigate this somewhat, and experience will teach you to look for only what’s relevant to your build, but a narrower window in the generation of both dropped loot and quest rewards would have been welcome.

Environments are huge and varied in visual design, helping further define Grim Dawn’s personality. An interesting mix of Gothic architecture, the western frontier, and splashes of Victorian styling give the game a unique flavor. Add in some crystalline nightmares from an aetherial plane and a few Lovecraftian horrors summoned by a crazed blood cult, and there’s certainly no lack of colorful creatures populating the world. 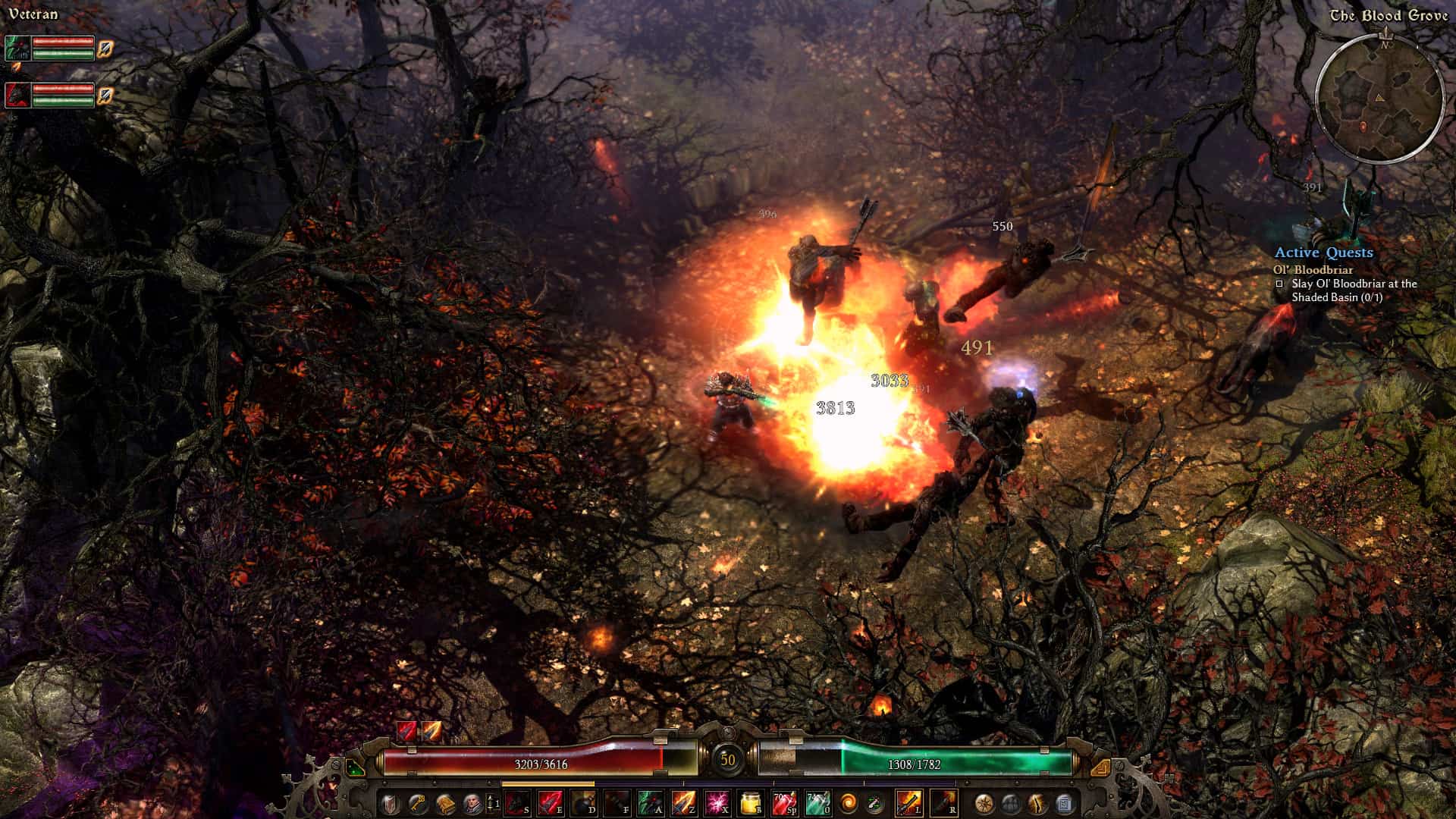 Though content is limited in this combat-focused scope, it’s not so limited in breadth. There’s a crafting system for items, and a huge constellation-based skill tree that allows for a lot of character nuance. 11 factions in the game allow you to gain reputation or infamy—and thus further faction rewards or punishments—by killing specific monster types or fulfilling quests, and two of these factions in particular are part of a mid-game choice players must make, earning the friendship of one and the ire of the other. These two each have their own questlines, backstories, and reputation tracks that give unique rewards, yet only one can be pursued at a time. While Grim Dawn doesn’t put too much emphasis on decision-making, there are still choices to be made that have tangible consequences.

Endgame content comes in the form of increased difficulty, each tier acting as its own world that can be left and returned to at will once unlocked. The difficulty curve is fairly mild, but does eventually ramp up to a stiff challenge, and dedicated players will find plenty of content to keep them going for the long haul. One run through the game should last between 40 and 60 hours, and multiple runs per character are encouraged by design.

Grim Dawn is a surprising addition to the genre that manages to be classically flavored without feeling like a knockoff. While it has some rough edges, the final version of the game is clearly the product of a passionate team. Plans for future support are in place, including at least one expansion pack, and an active community helps ensure the game’s future viability.

The quality and quantity of content for the price make Grim Dawn a great title to keep you going while you wait for other games to go on sale. With 4-person multiplayer, you can easily get in on the action with friends, and there’s enough here to justify investing the $25 entry fee without batting an eye. If you’ve ever been a fan of loot-heavy action RPGs, and especially if recent games have left you cold, this one is well worth your time and attention.