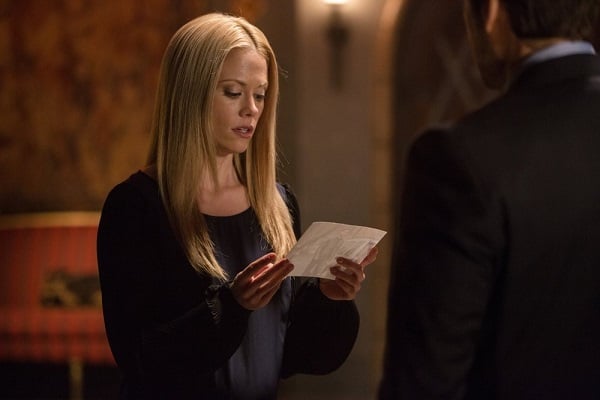 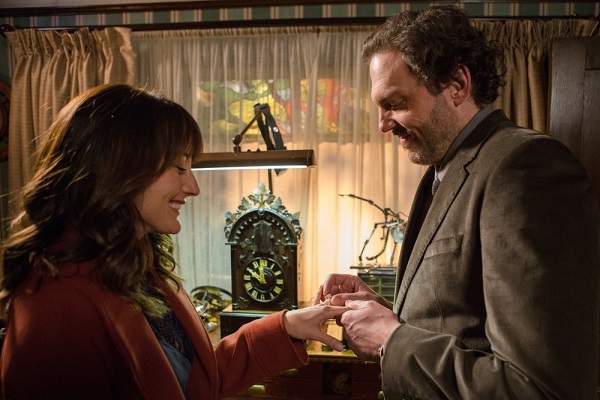 This week, on Grimm: Monroe modifies one of his clocks, Nick hunts a scalper, and Adalind prepares for Baby

Grimm heads off into an Olympics-necessitated month-long hiatus this week with a strong first half of a presumed two-parter, with significant progress on both character and plot fronts and a couple entertaining cliffhangers. The case of the week is interesting and appropriately gruesome, with a new berserker Wesen hunting down “worthy” victims and scalping them in an attempt to gain their power, but wisely most of this subplot is held for part two, allowing Jim Kouf and David Greenwalt to focus instead on Adalind’s continuing saga in Vienna as well as some dramatic developments closer to home.

Adalind’s European adventure has been a frustratingly stagnant arc throughout the season, with the series returning to it frequently but meting out developments so slowly that these scenes have often fallen flat. This week we spend a significant chunk of time with her and this increased focus helps her storyline tremendously. With Baby on the way three months early (due to whatever undoubtedly evil potion she’s been infecting her fetus with), Adalind is looking unsure in her choices for the first time. Will she change her tune, and would it even matter if she wanted to? The Royals drama remains disengaging, mostly because the storyline is peopled almost entirely with new characters, but at least Adalind’s role is becoming more interesting. Casting Alexis Denisof as the new Prince was a good move, but we’ve now spent half of the season with Adalind plotting in Europe and we’ve only seen this new villain twice. If the audience is expected to take the brewing war with/against the Royals seriously, a lot more work needs to be done to flesh out the characters at the center of it; a few vague, thrown-off lines per episode aren’t enough.

Much more engaging than either Nick’s case of the week or Adalind’s scheming is Monroe’s seemingly out of the blue proposal to Rosalee. The two are fantastic together and likely began dating in season one (most of their early courtship happened off screen), so it’s not surprising that two seasons later he’d propose. Unlike most series however, which would make far more an ordeal of the proposal, having Monroe consult Nick or Juliette about rings and proposal methods or the like, Grimm springs it on the audience as well as Rosalee. Of course Monroe involves a cuckoo clock, and of course Rosalee is shocked, expecting something at the restaurant (and disappointed nothing happened), rather than afterwards; the proposal is endearing and lovely, a wonderful match for the characters.

Monroe’s parents have been hinted at for quite a while, and given that viewers got their first glimpse of Rosalee’s non-Freddy family last week, it’s not surprising to see them pop up here. The notion of Wesen dating preferences was touched on in “Eyes of the Beholder”, when Hank got shot down for being human by his Wesen physical trainer, so audiences should have been primed for Monroe’s parents’ hard-line anti-not-Blutbad stance, which while being far from the most original development, is at least well handled. It’ll be interesting to see this side of Wesen politics explored further and throwing some familial strife into the mix should provide plenty of entertaining new storylines for both Rosalee and Monroe.

Everything from Monroe’s phone calls with his parents to Rosalee’s nervous cooking is delightful this week, making the quick turn and escalation that ends the episode particularly effective. Ending the cliffhanger with an emotional Blutbad v. Grimm attack (with Monroe stuck in the middle) is a great move made all the more entertaining by the fantastic and now characteristic Grimm cliffhanger title card and for this viewer, part two can’t come quickly enough. Grimm has struggled somewhat with its recurring elements this year, but in its past few episodes, it seems to have regained its footing. Here’s hoping the second half of the season continues the trend!

What did you think of this episode? Anyone else rooting for a Grimm double wedding? What’s next for Adalind? Think Hank will ever get lucky in love? Post your thoughts below!