In case you didn’t know, the last Harry Potter film is coming out on July 15th.  In  countdown to Harry Potter and the Deathly Hallows: Part 2, I will be doing a bi-weekly series called “Harry Potter as Cinema”, starting with the first film in the series and working my way up to the final film.  I will take an academic approach to the Harry Potter films as pieces of cinema, examining not only their quality but also what they are saying thematically. 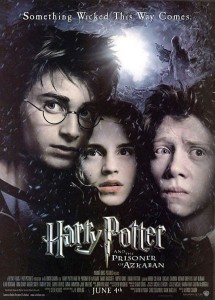 Harry Potter and the Prisoner of Azkaban

Harry Potter and the Prisoner of Azkaban is, in its own way, a game-changing film, not only for the Harry Potter series but also for big tentpole films. This film proved that you could make an artistic and personal film that doubles as a summer blockbuster while succeeding at both. From a pure filmmaking standpoint, Alfonso Cuaron’s film has yet to be matched in the soon-to-be eight-part series. As for its impact on the series, Cuaron’s film helped to shape the films that followed. Curaron’s pallet was the pallet used for the following films from the dark cinematography to costume design (Harry and his friends now wear regular clothes when they aren’t in class).

Compared to the previous film, Cuaron’s movie is a masterpiece.  This is the first great Harry Potter film, one that 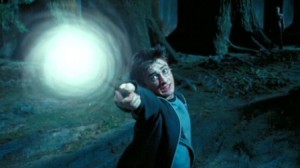 stands on its own as a great film and not just merely as an adaptation.  At the time, it seemed like a risky move to bring Cuaron on to a children’s franchise after his last film was the NC-17 Y tu Mama Tambien.  It seemed odd that Cuaron would even want to do it, considering his last foray into Hollywood, Great Expectations, was a nightmare for him.  It was Rowling who, being a huge fan of Y tu Mama Tambien, spearheaded the campaign for Cuaron to get the job.  Initially, their first choice was Blade II director Guillermo Del Toro, but he was busy setting up his Hellboy film at Sony. Del Toro did suggest that they go with his friend Cuaron. 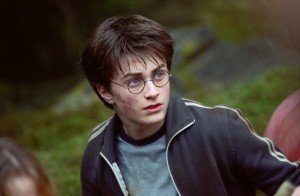 This may have been the best choice producer David Heyman ever made. Cuaron took the film and its themes seriously.  This is, in many ways, a spiritual sequel to Tambien. Both are coming of age stories about teenagers being forced to grow up.  In this film, Harry (Daniel Radcliffe) along with his friends Hermione (Emma Watson) and Ron (Rupert Grint) are right at the turning point between their adolescent years and their teenage years.  Their hormones have now started to kick in and girls are now being noticed.  There are a couple lovely touches with Ron and Hermione that address this, mainly after Ron is attacked by a big black dog and Hermione is tending to his wounds.  Unlike the previous films, this one works on an emotional level, which is something quite ironic considering how hard Chris Columbus’s films tried to push our buttons.  This is a much-needed sign of maturity.

However it is the filmmaking that really pops here.  This is the first film in the series that has a singular vision behind it.  Everything that Cuaron did in 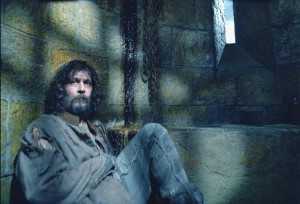 Children of Men is here, from the long takes to the use of hand-held cameras.  The long takes in this film are pretty impressive, most notably a two minute sequence in The Leaky Cauldron.  In this scene Cuaron starts with Ron talking with his two twins brothers Fred and George along with Hermione, and ends with Harry and Mr. Weasley having an ominous conversation about Sirius Black. Also, you only need to watch the first scene of the film to know you are in good hands.  Cuaron shoots this opening scene at the Dursley’s like a kitchen sink docu-drama, going exclusively with handheld cameras.  These are incredibly nice touches and really add to the film.

Another choice that comes up aces, and what distinguishes it from the first two films, is the choice of costumes.  Whenever the kids are not in class at Hogwarts, they are wearing regular clothes.  This is a brilliant move as it instantly makes the story more relatable.  Even the school robes are more ragged and loose.  It’s as if Cuaron chose to treat them as real kids who just happen to have special abilities.

This film harkens back to the days of New Hollywood when the directors ruled the studios.  It’s a 70s film through and through.  Back then we would see directors like Stanley Kubrick and Francis Ford Coppola would direct mainstream fare that was often daring and ambitious.  No studio today would finance A Clockwork Orange.  Is Cuaron’s film comparable to A Clockwork Orange?  It doesn’t matter, because it gave Cuaron the opportunity to make his own personal Clockwork in 2006, Children of Men.

The plot is another mystery of sorts.  A serial killer named Sirius Black (Gary Oldman) is on the loose after escaping from Azkaban (aka Guantanamo Bay) and his next target may be Harry.  Meanwhile, Harry and his friends are getting older.  We also have a new Defense Against the Dark Arts teacher Professor Remus Lupin (David Thewlis), who befriends Harry instantly.

What hasn’t been mentioned yet is the maturity of the acting.  Radcliffe has always been the best actor of the three leads and he once again does stellar work 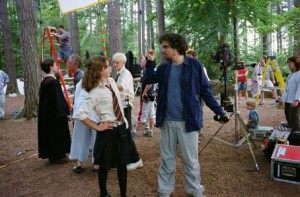 giving what was, at the time, his most mature performance to date.  His Harry is no longer an adorable adolescent but instead a moody teenager.  However it is Watson who is a revelation.  Free from Columbus’ stiff grasp, Watson gives a nuanced and heartfelt performance as Hermione. Grint is much better here, too, and now there is some real anger underneath that jolly smile of his.

With that being said, the most noticeable improvement comes from the adults.  Alan Rickman as Professor Snape is much better here, adding lots of shading to his strict and stern character.  The newcomers are also excellent.  Replacing Richard Harris, who died before Chamber of Secrets was released, is Michael Gambon, who makes Dumbledore his own.  Gambon’s Dubmledore is more verbose and spirited, much more youthful.  Gambon sort of plays him as an older hippie who hasn’t lost his touch. David Thewlis is wonderful as Lupin.  There is a kindness in his eyes, and Thewlis’s approach to the role, with his werewolf nature as a metaphor for homosexuality, is perfect.  Timothy Spall is wonderfully creepy as Peter Pettigrew.  However it is Oldman who steals the show as the troubled Sirius Black.  He is simultaneously scary and wounded as the ultimately victimized Black.

Cuaron’s film was the first complete triumph in the series. He wasn’t afraid to piss off the hardcore fanboys of the books by leaving stuff out and rearranging things.  Instead of translating the book to the screen, Cuaron actually turned the book into a cinematic story.  It is an arthouse film disguised as a big franchise movie.  There is a certain sensuality that Cuaron brings to the world of Harry Potter.  This is not merely a decent Harry Potter movie but it is actually a great film.  Cuaron was the first director to show that while Rowling’s text takes place in the wizarding world, it couldn’t be more of a human story. 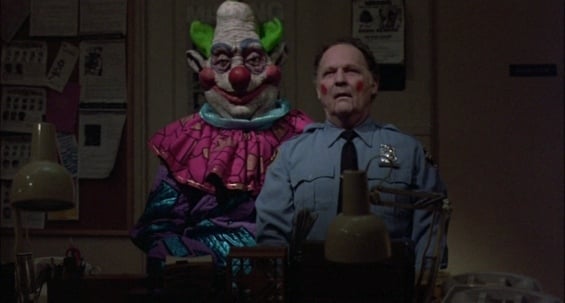