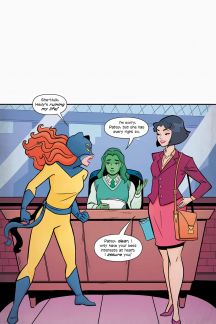 In Hellcat #5, Patsy Walker uses the power of friendship and truth to take down everyone’s favorite Enchantress ripoff, Casiolena (She does claim to have to dragons in Asgard though.) and conclude the first arc of Kate Leth, Brittney Williams, and Megan Wilson’ run on the title. This issue brings together all the supporting cast members that Leth and Williams have built up in the first arc to help her save the day as Patsy’s temp agency for superpowered twentysomethings stars to fall into place. And along the way, there is some build-up for the next arc which features Patsy trying to get the rights back to the comics from her childhood rival Hedy Wolfe. And, so far, it’s not looking good as she doesn’t show up at a meeting with her lawyer Jennifer Walters (aka She-Hulk) and Hedy’s lawyers. But, hey, she took a millennial manipulating sorceress so that’s a win in my book.

Hellcat #5 is reminiscient of the best kind of ensemble cast genre fiction, like Buffy the Vampire Slayer and X-Men, as the main hero organically builds a group of friends around her and teams up with them to take down the Big Bad with each character having a moment to shine or displaying hidden depths. For example, Poppo seems like a nebbish henchman to Casiolena, but in fact, he is a super cool double agent that just wants to be back up feasting and having a good time in Asgard. He just acted like a jerk to fit in with Casiolena. The double agent is kind of cliche, but Leth does a nice riff on it by giving a henchman depth and personality and having them quit their villain boss because they are overbearing. 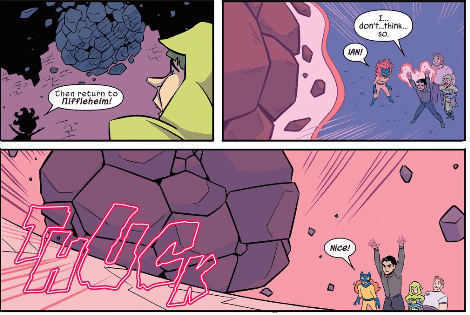 Another character, who gets a nice conclusion to his arc, is my personal favorite Inhuman, Ian Soo. Ian looked like a D-list supervillain (Who happened to be a fan of Wicked.) that most heroes would best in a cold open back in Hellcat #1, but Leth and Williams have helped him grow into a trusted friend to Patsy and even a bit of a hero in his own right this issue. He gets to use his telekinetic powers to stop a magical blast from Casiolena in a perfect burst of purple from Wilson and then reject her seduction to the dark side without a hint of doubt. Then, Leth has Patsy basically deliver the thesis statement of Hellcat about how making mistakes isn’t the same as being evil. This is a refreshing and nuanced take on morality in a superhero comic as Patsy treats the young people that Casiolena manipulated with warmth, empathy, and even a little humor as she teaches Phil how to actually improve her credit rating without sketchy magic. We’ve all done dumb stuff in our late teens and early twenties, but we can still grow and do something great with our unique abilities, like the cast of Hellcat. 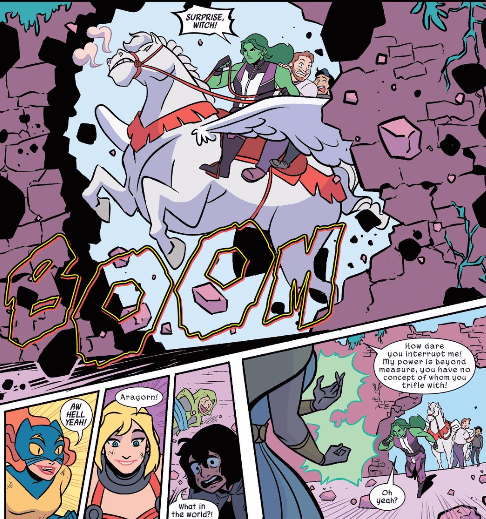 A good word to describe Brittney Williams’ art and Megan Wilson’s colors in Hellcat #5 is fierce. This issue is packed with action, conflict, and cosmic explosions. Williams draws She-Hulk with both power and restraint in this issue as she goes from sitting on a subway to tackling one of Casiolena’s henchpeople at the drop of a hat with her sense of humor intact as Leth gives her quips about acting like a Brotherhood of Evil Mutants not working out for most people. And she gets an even more epic moment when she blows down a wall astride Valkyrie’s horse, Aragorn with some pretty fun reaction shots of Valkyrie and Hellcat smiling at their badass friend. Also, Williams doesn’t use Hellcat’s mask to stifle emotions, but actually uses it to heighten her reactions to things with plenty of smiles for her friends and snarls for Casiolena. Patsy lighting up when she tells Bailey, a former shoplifter/Casiolena minion, what kinds of jobs she can do with her powers is the moral adorable thing. And along the way, Wilson adds extra mustard to Williams’ art with striking blues, purples, and even orange once when the heroes jump into action. The vivid background colors really direct your eye to what is going on in the panels.

Hellcat #5 is an explosive ending to the series’ first arc as Patsy and her friends get a nice win against Casiolena, but she has a lot to learn as she balances her life as a superhero with her actual job at Tara Tam’s tattoo parlor, the court case with Hedy, and hanging out with friends. But she has a great supporting cast that writer Kate Leth has fleshed out throughout the first five issues, bright and bouncy art from Brittney Williams, and intense colors from Megan Wilson so she has a great shot at overcoming this obstacle as well. Plus the final two pages have my third favorite Marvel character in it and will definitely make you sad that the next issue is a month off.