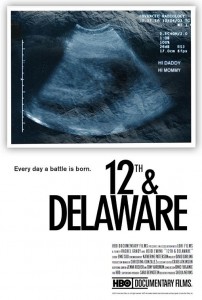 “It is difficult to walk into a film like 12th & Delaware without an opinion, but rest assured, wherever you stand on the issue, your opinion will be both respected and challenged – by the documentary’s subjects.”

Picture, if you will, an unassuming intersection in a small American town. On one side of the street, we find an abortion clinic. On the other side of the street, we find a pro-life pregnancy centre. The buildings look so similar that women looking for an abortion sometimes end up in the pro-life centre – a mistake encouraged by the centre director. Welcome to an absurd little skirmish taking place in Fort Pierce, Florida, that echoes across the wider battle over the issue of abortion in America.

12th & Delaware is an uncommon documentary: it is arresting, explosive, and important. Rather than inject themselves into the film, directors Rachel Grady and Heidi Ewing (of Academy Award-nominated Jesus Camp) let the subjects make their own case. To do this, Grady and Ewing were given intimate access to both clinics. They also film the experiences of several young women who bravely chose to share the roughest day of their lives with the camera.

The host of people who present their case and share their lives with the camera make this film worth watching. We first meet Anne, the director of the pro-life pregnancy centre, who chooses to invest 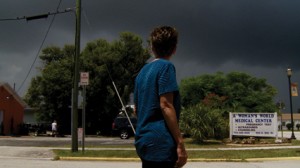 her life in convincing women not to have abortions, a task she accomplishes with pro-life literature, graphic and bloody films, and free ultrasounds. During one of these ultrasounds, Anne points out the foetus’ heartbeat to the couple and the ultrasound technician types ‘HI DADDY’ directly on the image. The picture, caption intact, is printed out for the couple. Also on Anne’s side is Father Tom, a Catholic priest who accuses the pro-choice movement of mimicking religion, and an awkward biker intent on tracking down the identity of the abortionist.

We never discover the identity of the abortionist – or abortionists, perhaps. The secrecy surrounding the abortionist’s identity, along with security cameras and a host of other precautions, colours our perception of the abortion clinic. One of the owners, Candace Dye, is the public face of the abortion clinic. She is an endearing woman who tells women that abortion is never a choice that people want, but one they sometimes need. Though both Anne and Candace speak to the camera, it is when they are counselling their respective patients that the true strength of their convictions is intimately laid bare for the camera.

The women caught between the two camps and their on-camera experience make this film special. They provoke our empathy: they are besieged by aggressive activists with ulterior motives, presented contradictory information, and baffled as to why something so personal for them has become equally personal for complete strangers. Fortunately, these women also provide the film with unexpected humour – look out for a bristling conversation about condom use.

It is difficult to walk into a film like 12th & Delaware without an opinion, but rest assured, wherever you stand on the issue, your opinion will be both respected and challenged – by the documentary’s subjects. The directors are smart enough to remove themselves from the screen and let their subjects do the talking, and they are wise enough to let the audience draw their own conclusions.