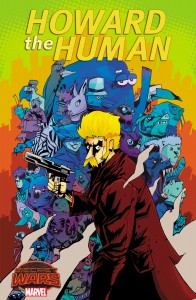 Some arbitrary sci-fi geek stuff happened in the Marvel universe recently thanks to the Secret Wars event comic, resulting in really weird continuity that is going to last for the few months this event will need tie-ins to hit comic shops with. For nerds who want more pieces of the large, sprawling story, there are certainly tie-ins to fit their desires, but there are also straight up goofy releases that certainly don’t need Secret Wars to exist. Yes, tie-ins like Howard the Human aren’t even remotely anchored to the main Secret Wars storyline, simply using the messed-up-continuity angle to deliver a wacky What If? story.

In the case of Howard the Human #1, a very stylish, cool and funny What If? story.

Enter Howard the Human, a familiar human version of Howard the Duck: a sarcastic private investigator who gets wrapped up in sticky superhero situations. In this comic is a goofy detective story, delivered with a tongue-in-cheek sense of suspense and seriousness. There is inherent amusement to be had with the mere concept, what with the deadpan anthropomorphic mice and chickens and lizards, and that basic humor is maintained throughout the 20 pages of the comic. It helps that the basic humor there is aided by the added giggles from seeing conventional Marvel characters like Daredevil reimagined as “Mouse Murdock,” and so on.

What really elevates this comic to must-read status, however, is Jim Mahfood’s strange, scratchy art, popping with Justin Stewart’s colors. The panels look straight out of a remarkably talented, angst-riddled teenager’s notebook, scribbled on as he waits for his math class to end. Rough lines along with loads of color melt delightfully into the pseudo-seriousness of the book. All of the action also manages to dynamically buzz panel-to-panel, with snappy, exaggerated motion.

There’s cool stuff happening in the Marvel universe right now, from the epic restructuring of worlds to the powerful diversity-focused switch-ups evident in beloved properties like Avengers and Spider-Man. In between are things like Howard the Human #1, smaller but still great.