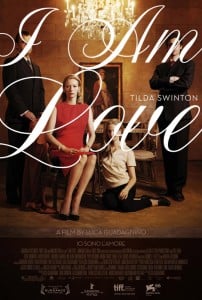 I Am Love / Io Sono L’amore

The poster for Luca Guadagnino’s film shows a regal Tilda Swinton in an eye-catching red dress surrounded by her sober-looking family. In another version, the frock has undergone a cheeky digital makeover to a shocking pink that matches the movie’s bold, declaratory title. The symbolism might seem a little obvious, but this is a story in which one woman’s passion comes bursting to the surface – with tragic consequences.

“Something part palace, part prison, part museum” is how star and producer Swinton envisioned the house at the centre of this contemporary drama about the Recchis, a wealthy Milanese family. Opening with a series of almost monochrome shots of a snowbound Milan, Guadagnino closes in on the elegant but forbidding 1930’s mansion, where Russian-born Emma (Swinton) and her husband Tancredi (Pippo Delbono) are preparing to host a dinner party. Guadagnino’s willingness to take risks in the pursuit of what Swinton has called “pure cinema” is what distinguishes this film from other stories of forbidden love involving ladies who are old enough to know better.

On the surface, Emma is an attractive middle-aged woman, perfectly at ease with her three grown-up children and comfortable within the sumptuous trappings of Italian society. Guadagnino and cinematographer Yorick Le Saux linger over the chandeliers, wall hangings and gleaming napery that indicate decades of affluent living. But as the white-gloved lackeys hover over the birthday celebrations of aging patriarch Edoardo, we sense that something – or someone – is about to shatter the family’s much-prized unity.

Soon there is an announcement about the future of the family textile business, but it isn’t the defining event of this opening set piece. Guadagnino’s interest lies not in soap opera-style financial wrangling, but in how two of Emma’s children unwittingly lead her towards a personal epiphany. First her daughter Betta (Alba Rohrwacher), a talented artist, causes a minor ripple by declaring that she’s now more interested in pursuing photography. Emma’s subsequent discovery of a heartfelt note inside a CD box reveals that Betta has fallen deeply in love – with a girl.

During the meal, a young man turns up looking for Emma’s son Edo (Flavio Parenti). He awkwardly refuses to join the party, but it’s clear that Antonio (Edoardo Gabbriellini) a handsome and supremely talented chef, has struck a chord with the lady of the house. So, as Edo eagerly makes plans to open a restaurant with his friend, Emma is drawn into a high-risk affair. The power of Swinton’s performance lies not in her mastery of Italian dialogue but in her gradual, unspoken surrender to passion over the dictates of convention. This is a film in which speeches are, for the most part, far less important than the sense of underlying tension generated by John Adams’s operatic score and Le Saux’s restless camera work. Late in the film there’s a sinuous tracking shot that follows Emma’s impulsive descent to the basement kitchen for a stolen moment with her lover.

Guadagnino’s willingness to take risks in the pursuit of what Swinton has called “pure cinema” is what distinguishes this film from other stories of forbidden love involving ladies who are old enough to know better. Epicureans will experience as frisson as Emma is seduced by Antonio’s lovingly prepared prawn dish. The lingering shots of those seductive crustaceans could have been ridiculous, but they’re another small and believable step in Emma’s awakening to the possibility of a new love. When the action moves to the glorious countryside around San Remo, Emma allows Antonio to cut her hair, in an apparent nod to her daughter’s recent change of style. Her rebellion reaches a crescendo in the extraordinary al fresco sex scene, shot in huge close ups to the accompaniment of teeming insect life that threatens to drown out everything else.

Guadagnino and Swinton first worked together on The Protagonists (1999) and this latest collaboration evolved over a period of nearly 11 years. It’s too early to say whether they can be measured against some of their inspirations –Tolstoy, Flaubert , Hitchcock and Visconti – but there is much to admire in this stylish and well-acted drama.

There are faults: some of the camera placements are too artily self-conscious, and Emma’s interactions with her husband and children often feel rather perfunctory. Unlike Visconti’s The Leopard, this isn’t an in-depth exploration of family dynamics buckling under the forces of history. But neither the director nor the star can be accused of timidity in the way they embrace the protagonist’s headlong rush towards her destiny, and even the Master of Suspense would have applauded the shocking climax of a confrontation in the garden, which made me jump out of my seat.