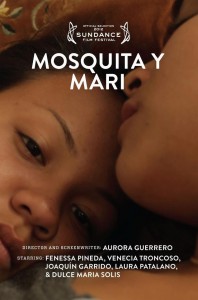 Written and directed by Aurora Guerrero

What can you say about teenagers? Ask a parent and they’ll likely say they haven’t a clue. Ask a teenager and they’ll likely say the same. Understanding them is a dissertation of its own and very few filmmakers have ever shown an adequate propensity for it.  Alumni include the illustrious John Hughes, early George Lucas (American Graffiti), the French contemporary Céline Sciamma (Water Lilies, Tomboy), and now, thanks to her debut film, Latina filmmaker Aurora Guerrero. Benevolent, sweet, and with devastating heart, Guerrero’s Mosquita Y Mari is an essay on young love that unquestionably makes the grade.

Set in Los Angele’s Huntington Park neighbourhood, Mosquita Y Mari tells the story of 15-year-old Yolanda (Fenessa Pineda). An obedient, straight-A student with an aversion to drugs, alcohol, and boys, Yolanda is every parent’s dream. However, her college-bound life is suddenly impeded when Mari (Venecia Troncoso), her dialectical opposite, moves in across the street.

With a potent mixture of smitten and intrigue, Yolanda becomes fixated, and under the pretense of helping Mari in math, their awkward acquaintance evolves into an intense relationship that puts both their lives into perspective. What Guerrero consistently does so incredibly well is make the film feel natural, yet inspired. With a topic as sensitive as adolescent homosexuality, Guerrero handles it with a gracefully deft touch, electing to be subtle in place of being visibly salient.

For instance, we are initially unsure about Yolanda’s sexuality. In an early scene, she patronizes a party filled with loud music, booze, and inter-gender fraternizing. When she unceremoniously leaves, we get a sense that she’s a bit humdrum, a person that rejects the bahaviour of her peers. Certainly this is true, but this sequence is holistic, and when we piece together similar scenes, we get an overall sense of her proclivities.

On the topic of sexual orientation, Mari’s, like Yolanda’s, is not made readily clear. Perhaps this is because they’re shy, or maybe it’s because they don’t want to take the risk of making an advance on a possibly heterosexual girl, but either way, this infuses the characters with realistic sensibilities (teenager’s don’t always know for sure, so why should we?).

In fact, all of the film’s characters are likewise, so when the narrative deepens, their actions and reactions are natural. As the story reaches its logical consequence, it becomes profoundly moving. Set amongst the backdrop of Los Angeles, Mosquita Y Mari also provides moments of socio-economic commentary, and because they’re so intrinsic to the characters, they are fully justified. The constant trepidation of poverty and penury imbue the film with underlying tension, adding further depth to the characters and the story.

Troncoso and Pineda should also receive top marks for their moving performances, but one can’t help but feel that Guerrero must’ve had a heavy hand in their success. From start to finish, she is able to conduce a sense of realism into the story, making every aspect of Mosquita Y Mari feel real and lifelike.