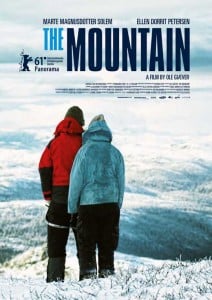 Written and Directed by Ole Giæver

On the snow-covered precipice of a Norwegian mountain, Solveig (Ellen Dorrit Petersen) and Nora (Marte Magnusdotter Solem) are parlously exposed – not to the elements themselves, but to each other. Full of emotion, angst, and reticence, Ole Giæver’s The Mountain is a spellbinding meditation about love and loss redeemed.

The film follows the married couple as they hike up the desolate Norwegian countryside. With their relationship already on the rocks, Solveig sees the excursion as a way to purge the discontent in their marriage, while Nora doesn’t see the point at all. As we slowly increment up the mountain, we find that the emotional chasm between the two is more plaintive in origin, with the hike acting as an intrepid journey for catharsis.

The location of the film is incredibly important because it serves as a storytelling device. On the mountain, Solveig and Nora are alone. They cannot hide their habits (like smoking), can’t run away from their problems, and are forced to confront each other’s flaws and imperfections. We are essentially witnessing the breakdown of a relationship, and we are witnessing it out in the open – a film about the elephant in the room, without a room.

This creates a lot of tension surrounding the dynamics between the two, but it also provides moments of emotional release and honest clarity. As the frustration between the two women begins to mount, it eventually explodes in a cascade of passionate altercations. These conflicts help purge the resentment between the two in a real and satisfying way, and allow the characters to evolve in a way that feels natural.

Underscoring the turbulent relationship between the leads is the mutual loss suffered by the two. Introduced with deft subtly, this back-story slowly creeps into the narrative and eventually commands the purpose of the film and its characters. As heartbreaking and sad as their loss was, Solveig and Nora’s attempt to salvage the remnants of their broken relationship is equally so.

Along with the deeply moving story, the film’s undisputedly crowning achievement is its dazzling visuals. The cinematography is grandiose and sublime, using every opportunity to exploit the natural beauty of its shooting location. Additionally, the composition of the film is also appropriately bleak, de-saturated and antiseptic with artistic merit. The look of the film often matches its feel, which is to say, wondrous in scope and execution.

Shot with stark, glacial beauty, and infused with themes of unimaginable loss and redemption, The Mountain will undoubtedly evoke comparisons to Atom Egoyan’s The Sweet Hereafter.