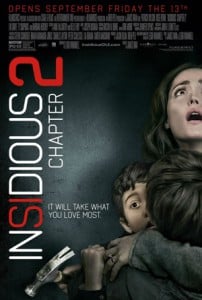 Insidious: Chapter 2 joins the less than stellar ranks of films like The Descent: Part 2 in being an immediate continuation of a horror film that, though ending with a looming threat, did not call for a sequel. After a prologue set in 1986, the film kicks off on the night its predecessor ended, with Rose Byrne’s Renai Lambert questioned by police over the supernatural events that led to the murder by strangulation of psychic Elise Rainier (Lin Shaye). Insidious’ final moments saw Elise confront the strange behaviour of Renai’s husband Josh (Patrick Wilson), the man now seemingly possessed by the spirit of a black-veiled bride thanks to the Poltergeist meets A Nightmare on Elm Street mishaps that encompassed the film’s third act. Chapter 2 sees the Lambert family, as well as new Elise stand-in Carl (Steve Coulter) and returning ghost busters Tucker and Specs (Angus Sampson and the film’s writer Leigh Whannell), deal with Josh’s strange behaviour, the return of the ghostly haunting, and an increasingly convoluted ascent into Whannell and director James Wan’s respective rectums.

Wan’s earlier 2013 effort The Conjuring – underwhelming though much better than this calamity – had a problem this film shares, that of the placement of the film’s wailing, siren-like score often tarnishing any potential frights. That being said, as destructive to The Conjuring’s atmosphere as the sound design was, Insidious: Chapter 2 almost never gives you those moments of effective, unnerving silence to be disappointingly interrupted by noisy jumps. This is a horror film of oppressively annoying sound. Some liken Wan’s directorial style with horror to amusement park rides; if Chapter 2 is like any ride, it is “The Little Land of Duff” from The Simpsons. 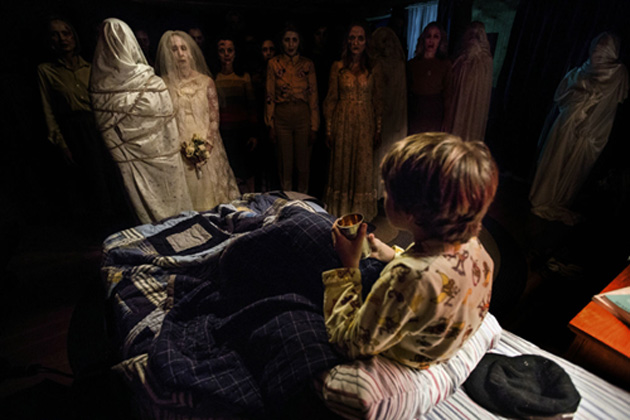 The film is also a failure on the visual front. In Insidious, at least in the film’s first hour, Wan pulled off many scenes that, if not necessarily frightening at any point, at least created anxious unease. In Chapter 2, it’s a repetitive barrage mix of either horribly lame jump scares or ghostly figures pulling laughably goofy faces while zooming towards the camera as though they’re in a Spike Lee dolly shot. Perhaps due to the budget increase, the first film’s appealing, almost-icy white palette for the “real world” content has been abandoned for something far less distinctive, while the astral plane stuff, which, to chagrin, gets an even bigger role here, also lacks in visual power; the red dungeon vibe the first time round may have looked wholly derivative of a Freddy Krueger lair, but it was at least memorable.

Expanding on the Poltergeist aping, Chapter 2 throws major elements of The Shining and Psycho into the mix to little dramatic success. Whannell’s script is even more scattershot tone-wise in this instalment, its attempts at comedy with Specs and Tucker completely floundering. The script also loses any sense of actual character in favour of focusing entirely on increasingly elaborate back-story and mythology, all of it tiresome, tedious nonsense. Pair this screenplay, one that’s like a character profile page from a fan-site read aloud, with a car alarm wall of sound and dopey design choices, and you have a terrible horror film that’s somehow both painful and numbing at the same time. 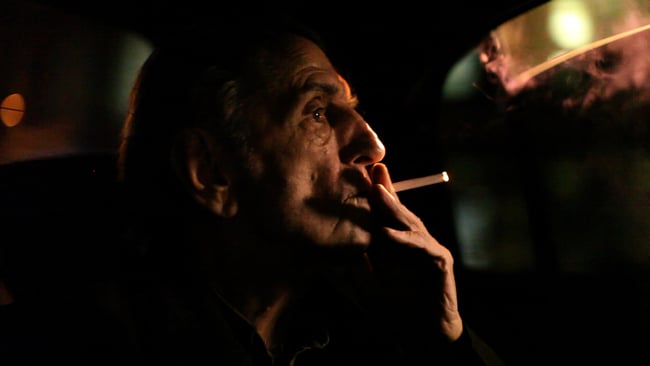