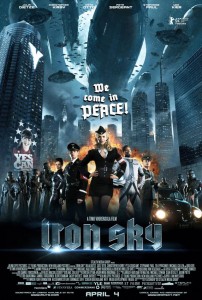 When you hear “Space Nazis,” certain episodes of Star Trek come into mind.  A popular theme in works of science fiction, it is a phrase coined with the idea of Nazis settling on the Moon after their defeat in World War II, not to mention it being a popular conspiracy theory.

Iron Sky is the latest reimagining of this theory.

The film is set in 2018. James Washington (Christopher Kirkby), a black male model, is sent to the Moon in a bid to help the President (Stephanie Paul) be re-elected.  He is captured by the Nazis, who have been based on the dark side of the moon since 1945, and subsequently becomes involved in their plan to invade and rule Earth.

Even before its release, Iron Sky faced controversy in the UK due to the distributor’s decision of a one-day release; eager fans only had 24 hours to catch it at various cinemas across the country.  The filmmakers were not happy with the decision and issued a statement on their website.  Thanks to Iron Sky‘s online fanbase, an independent cinema in London was granted an extended run of the film before its DVD and Blu-Ray release on May 28th.

From first glance, Iron Sky is not supposed to be taken at all seriously.  The plot is predictable and unbelievable in places, which isn’t helped by the far-fetched characters.  You have Renata Richter (Julia Dietze), a seemingly educated blonde bombshell who is completely naive when it comes to history; a President thinking that she can retain her position in office through an ill-fated publicity stunt and her aide, Vivian Wagner (Peta Sergeant), who is just megalomania personified.  Paul and Sergeant try and make their characters stand out only to come across as completely irritating.
–
Aside from Kirby, playing the typical wisecracking anti-hero who falters towards the end of the film, the male characters such as Nazi superiors Adler (Götz Otto) and Kortzfleisch (Blade’s Udo Kier) – Führer of 2018 – are more watchable; single-minded, one-dimensional characters and all-round bad guys. The sense of direction during the film is uneven, especially towards the climatic scenes when the Nazis put their plan into action. Director Vuorensola tries to keep the action going but with new plot developments being placed every five minutes, it’s hard to figure out where each character stands.  With its uncertain allegiances and plot holes, the film lacks imagination towards the end, and tries to wrap everything up too quickly.

However, Iron Sky has certain charms.  The effects of the Nazi moon base are quite impressive for a low-budget film, and the scenes emphasising how ‘out of touch’ the Nazis are with the modern world are a nice touch.  They bring out the most laughs and bring a welcome spark into this lacklustre B-movie.

Iron Sky has a good premise and credible visual effects, but the feature is unsupported by its general inconsistency and lack of originality.  It’s a damn shame, as a film about Nazis from space could have done a lot better.