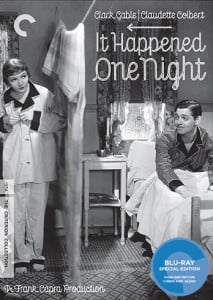 It Happened One Night
Directed by Frank Capra
Written by Robert Riskin
USA, 1934

When Frank Capra came upon the 1933 Samuel Hopkins Adams story “Night Bus,” he thought it would make a great film. He bought the property and took it to screenwriter Robert Riskin, with whom he had worked a few years prior on Platinum Blonde (1931). The script was set to be Capra’s next feature for Columbia, then a lower-rung studio where he was their preeminent director. The problem? Nobody wanted to make the film. Several top actors and actresses of the day turned down the picture, Robert Montgomery, Carole Lombard, and Myrna Loy among them. Clark Gable, not yet the caliber of star he would become, eventually accepted the male lead, and Claudette Colbert eventually (and reluctantly) took the female lead … under the condition that her $25,000 salary would be doubled, which it was. The film’s entire budget was $325,000. Shooting lasted a mere four weeks.

When all was said and done though, the film, retitled It Happened One Night, came away with five Academy Awards, becoming the first film (and one of only three films still) to receive Oscars in the “big five” categories: best picture, director, actor, actress, and screenplay. It’s funny how things work out.

This is what romantic comedies are all about — things improbably and hilariously working out for the best. That’s certainly the case with It Happened One Night. When runaway heiress Ellie Andrews (Colbert) jumps ship and flees her father (Walter Connolly), neither she nor he expect what transpires. Against his wishes, she plans to marry the curiously named and rather irrelevant “King” Westley (Jameson Thomas). To do so, she must get to New York City without anyone finding out who she is, lest they alert her father to her whereabouts. At the same time, a drunk down on his luck reporter, Peter Warne (Gable), has been newly fired (or has assertively quit, as he pretends to fellow drunkards). 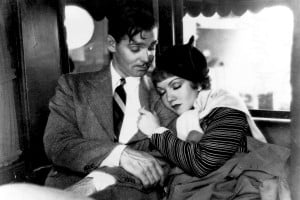 Both Ellie and Peter are stubbornly independent. She has apparently been a handful for some time (“Daughter escaped again,” wires her father), and she certainly bares her fair share of firecracker determination. Similarly, Peter is more than content to go his own way, talking tough and being charmingly reluctant to give an inch. Neither are in a state of repose when they meet. She’s agitated and he’s inebriated. To say the least, they get off on the wrong foot. Which of course means they’re destined to fall in love.

But this won’t be easy, and it isn’t. Be it in the cramped quarters of their bus, as they hoof it along a country road, or in the confines of a motel room, they butt heads, trade barbs, and annoy each other. The sexual tension is obvious, to us anyway. They’re both quick with a quip, as the genre dictates; she derisively refers to him as “young man,” while he appoints her a “brat.” He has a tremendous ego, is rather domineering, and initially thinks of her as just a headline. She’s stuck up, pretentious, and self-absorbed. Yet through the course of their road trip romance, the realization of potential success (her marriage, his story) starts to diverge from their new, true, desires.

As enduring as the comedic love story of It Happened One Night is, the film is also very much of its time. Despite her independence, Ellie is desperately helpless, adopting the clichéd gender role of the early 1930s, and Peter at times expresses the worst kind of masculine assertiveness. There’s no maliciousness in its intent, and one must bear in mind the film’s historical context of production, but when you hear Peter declare (to Ellie’s father no less), “What she needs is a guy that’d take a sock at her once a day, whether it’s coming to her or not,” well, it’s a little awkward.

Nevertheless, It Happened One Night also encapsulates more poignant elements of its era, far more significant than any old-fashioned notions of domestic conduct. Lines waiting to get into outdoor camp showers, phrases of homespun hokum, and train car vagabonds; all of this keeps the film deeply imbedded in its Great Depression milieu. Certain portions of the film bring to mind The Grapes of Wrath and its scenes of destitute travelers and impoverished folks just getting by. To paraphrase Ma Joad, “These are the people,” and Peter especially shows affinity for the common everyman of America. 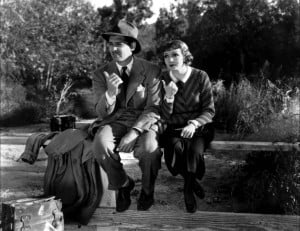 Still, as It Happened One Night is, more than anything, a romantic comedy, one probably shouldn’t get too bogged down in this realistic backdrop. Yet it was most certainly on the mind of Capra. At one point, Peter says he wants to tell a “simple story for simple people,” and this could very well be the recurrent modus operandi for Capra himself. Sure, he’s all for having a good time, as he does here, but along the way, there is no reason not to sprinkle in some social commentary, cleverly so in this case. Peter seems to have an utter disdain for money and is more concerned about moral fiber (“Ever hear of the word humility?” he asks Ellie). And his musings about proper donut dunking technique, about the best ways to thumb a ride, and his explanation of why Ellie has no idea what a piggy-back ride is (“I never knew a rich man yet who could piggy-back ride”), keep him on the side of the average American Joe. Part of the film’s evolution is her coming around to his side of the tracks, as when she merrily joins an impromptu sing-a-long on the bus or when she shows him a thing or two about how to really best hitch a ride.

If It Happened One Night endures, and is continually regarded as the Hollywood classic that it is, it’s due to the romance and the comedy, both dependent on the screen chemistry of Colbert and Gable and on Ruskin’s fantastic screenplay. In the case of the latter, the dialogue especially pops in the best screwball tradition:

Peter: I never did like the idea of sitting on newspapers. I did it once, and all the headlines came off on my white pants. On the level. It actually happened. Nobody bought a paper that day. They just followed me around over town and read the news on the seat of my pants.

Peter (when Ellie falls into his lap): Next time you drop in, bring your folks.

That’s amusing dialogue no matter what year it is.

Of course, Capra deserves due credit as well. His direction is flawless. From the tonal shift when Peter and Ellie realize their conflicted predicament — the film suddenly turning still, quiet, slow, and serious — to the single take on Gable and Colbert eating breakfast in exceptionally banal naturalistic performances, Capra was a master at keeping the viewer engaged. He could also be sly when he needed to, as in the film’s Lubitschian conclusion, a perfectly romantic way to subvert the censorial codes of the time.

But is the film a screwball comedy? In a conversation between Molly Haskell and Phillip Lopate, included as part of the newly released Criterion Collection Blu-ray, the two question It Happened One Night’s designation as such, to say nothing of its place as perhaps the first of its kind. As they point out, it is lacking the “physical chaos,” the relentlessly rapid-fire dialogue, and the same degree of silliness as, say, Howard Hawks’ Twentieth Century, which, as Haskell points out, was released the same year. 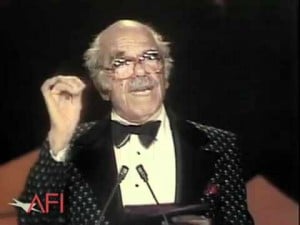 The exchange between these two influential critics is but one standout feature of this Criterion release. There is, first and foremost, the 4K digital restoration, which looks fantastic, as well as an interview with Frank Capra Jr., the nearly two-hour long documentary, Frank Capra’s American Dream, and a new digital transfer of Capra’s first film, the 1921 silent short Fultah Fisher’s Boarding House. There is also an essay by critic Farran Smith Nehme and the 1982 American Film Institute tribute to Capra. This last inclusion is particularly entertaining, as a who’s who of legendary stars proclaim their admiration for the director. It’s great to see so many Hollywood luminaries in one room, all still alive and kicking: Colbert, James Stewart, Bette Davis, Charlton Heston, Peter Falk, Jack Lemmon, and Fred MacMurray, among others. A very funny Steve Martin even turns up, as does Telly Savalas, who shares a short but touching story about how Capra’s films affected him and his friends.

Together with Ruskin, Capra would go on to make several of his most acclaimed films, such as Mr. Deeds Goes to Town (1936), You Can’t Take It with You (1938), and Meet John Doe (1941). And while It Happened One Night garnered Capra his second Oscar nomination for director and his first win, he would receive further trophies for Mr. Deeds Goes to Town and You Can’t Take It with You, and additional nods for Mr. Smith Goes to Washington (1939) and It’s a Wonderful Life (1946). However, I must admit a lukewarm response to Capra in general, though I would count It Happened One Night as his finest film. While his pictures have their moments — some truly great moments — many leave me indifferent. At the same time though, I genuinely appreciate his value to film history and American culture. 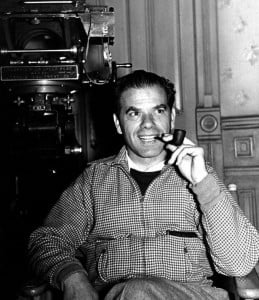 While I don’t necessarily consider his films among Hollywood’s best of the best, their cultural stamp is undeniable. It’s coincidental that I would write on The Cabinet of Dr. Caligari right before this (and that the Blu-rays of each were released the same day), because I see some striking similarities between that German masterwork and Capra’s most memorable features. Chief among these is how their respective nations of origin are represented. Capra and Caligari tap into national consciousness in extraordinary ways, reaching audiences of their time with profound cinematic statements (albeit one obviously more metaphorically than the other). To understand Weimar-era Germany, watch Caligari. To understand America in the 1930s and ’40s, watch a Capra film.

Even today you can see why Capra endures. In the AFI tribute, the director himself reveals the secret to his art: “the love of people,” “the freedom of each individual,” the “equal importance of each individual.” This is why Frank Capra is vital to American film history and why his films are always worthwhile. Reflecting on this in 2014, when Americans have such a jaundiced view of their government and society, Capra’s work still touches on important and culturally relevant features: freedom, individual value, equality. It’s also about a love of country — its promises, its possibilities, and its people. And this is something the immigrant Francesco Rosario Capra expressed as well as any other American filmmaker. 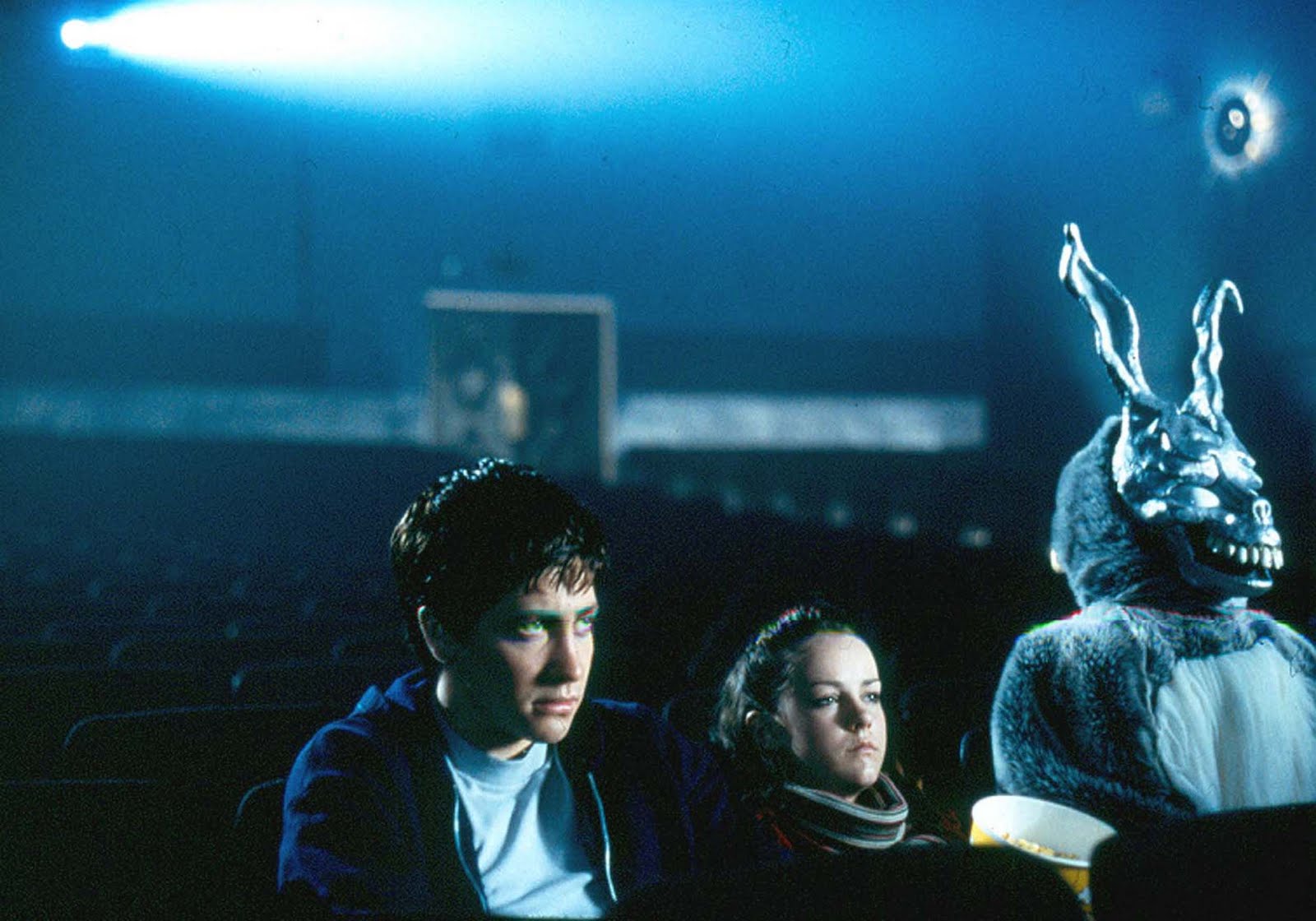 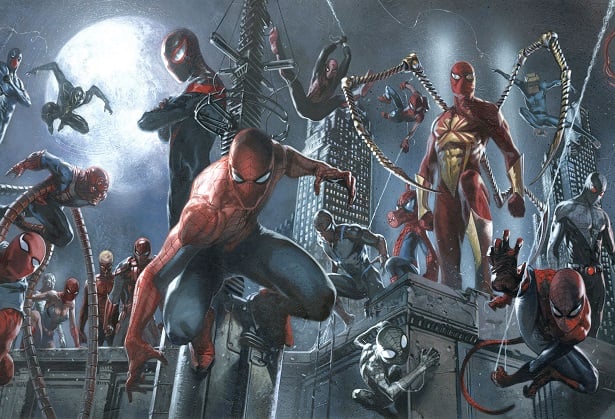