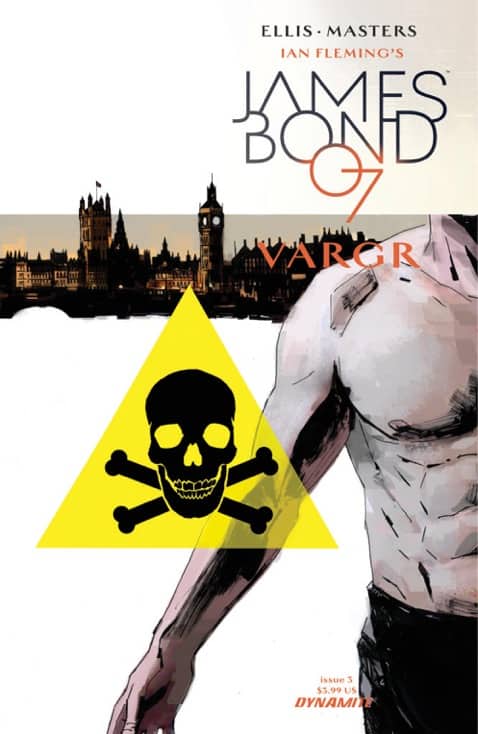 After two issues during which writer Ellis and artist Masters supplied fans with ample set-up, issue number 3 of the VARGR storyline finally kicks into higher gear. Bond takes up on Kurjak’s invitation to inspect one’s of his warehouses, but unbeknownst to the hero, the brilliant scientist has a trap laid out to dispatch of the pestering double-oh. Meanwhile, Kurjak comforts assassin Dharma after her failure to vanquish 007 back in issue 2 and subsequently unleashes his ultimate weapon: Mr. Masters, the incredibly fit, biochemically altered man hinted at twice already. In addition to sharing a relationship with Dharma, he is Kurjak’s blunt instrument par excellence. If Bond makes it out alive of the warehouse, Mr. Masters is to handle the assignment…

With issue 3, VARGR really begins to hit its stride, dispensing with the pleasantries of introducing Bond to his new allies and covert meetings with potential enemies, instead thrusting him head on into a trap from which he has to use quick thinking, impressive physical attributes and his famous marksmanship in order to escape with his life. Recall, for instance, the cold opening back in the first few pages of issue 1. It was a brutal, unapologetically violent ode to the sort of action Ian Fleming relished in describing in his novels. Giving that VARGR is the first story launched by Dynamite (hence no precedent to rely on) and that fans are only receiving the adventure piecemeal once a month, some may be forgiven for forgetting just how bloody and gruesome that opening action scene was. Well, Masters’ skills as an artist for depicting intense violence run amuck in issue 3, not once but twice. The warehouse sequence is replete with Bond having to blast his way out of trouble against a flurry of capably armed hoodlums. Blood gushes out aplenty with each bullet tearing through flesh and bone. What’s more, once his assailants are on the ground for the count and 007 has extracted what information he wants out of them, he ensures they won’t be getting up again by planting an extra cap into each and every one of them!

A second segment, which shan’t be spoiled here, further emphasizes the point that as far as the violence is concerned, Ellis and Masters are not playing around. They mean to showcase exactly how gritty and painful the world of James Bond can be. Suffice to say however that Mr. Masters’ (the assassin in the book, not its artist) ruthlessness is equal parts efficient and terrifying. In fact, part of the terror stems from the fact that he is clearly under the control of either a drug or in-plant, it is not clear what as of yet. He and Dharma evidently share a passion, yet Masters is incapable of feeling pleasure. Killing appears to be one way for him to feel anything at all, but perhaps there is more to him that shall be divulged in the three remaining issues of the VARGR storyline. As it stands, he is a psychopath tinged with tragedy, an curious mix that will hopefully reap dividends. It should be noted that there is some artistic flourish to the proceedings, as Masters will occasionally emphasize the impact of a killer’s final blow, be it Bond’s or someone else’s, by leaving that character in black and white and colouring the background a simple, vivid red.

The latest chapter also continues to present little personality traits of the eponymous hero, or anti-hero, depending on whom one asks. Immediately following his near-death experience at the warehouse, Bond quickly text messages his colleagues back at MI6 (one assumes his phone benefits from apt protection against hackers given how, on face value, it appears as a somewhat careless manoeuver), briefly explaining what transpired with a little bit of spy-speak, promising to fill the home team in shortly, and then sits down up front at a hip German bar and gulps down some bourbon. No contact with his people at the embassy, no desire to get back to Kurjak and turn the tables on him, just a real solid drink to wash away the tension.

As argued a little bit in the previous review, readers and Bond fans will really only be able to determine just how good this new monthly series is once the VARGR plot is resolved in a few months from now. This is all new and, as of yet, it is difficult to say what sort of template it will follow. We are at the halfway point of VARGR and precious little is known about the drug that has made its way into Britain, although the book ends on a cliff-hanger suggesting that all is not what it seems with the product, although that could have been deduced already in issue 1 by its very unorthodox, skin-crawling introduction. Issue 3 is not as concerned with story as it is with revealing how much of a force Bond is when caught in a fix.

While the secrets behind Kurjak’s research and its effects on Britain will surely be revealed by the end of issue 6, incredibly dense plots are not a requirement to satisfy Bond fans. So long as Warren Ellis and Jason Masters can tow the line between some decent mystery, compelling supporting players (both villainous and otherwise) and the sort of rip-roaring action issues 2 and 3 have provided, then it feels safe to say that James Bond 007 is in reasonably safe hands and that Dynamite Entertainment knows what it’s doing with the property. Some issues will have the task of divulging necessary plot. Others, like 3, serve more as jumping pads from one major plot point to another, which, in the world of 007, is code for blistering action that leaves death and destruction in its wake. The best that can be said about the monthly series thus far, keeping in mind that it is early, is its consistency.