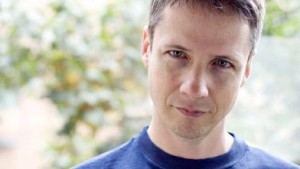 According to The Playlist, John Cameron Mitchell is producing an animated feature for writer and artist Dash Shaw – the creator of Bottomless Belly Button and the man also responsbible for the comic book featured within Mitchell’s new film Rabbit Hole (read my review here).

Mitchell was reported saying, “I’m actually producing his animated feature now,” and when asked if it was based on either Bottomless Belly Button or BodyWorld, an online comic that was collected as a book this spring, Mitchell emphatically said, “No.”

“It’s not based on anything. It’s original. It’s called The Ruined Cast. It’s going to be 2D. It’s going to be weird, surreal… Well you know his style. I keep comparing it to Philip K. Dick meets The Simpsons. And it’s brilliant. He’s gone through all the Sundance labs this year. And I’m producing it with the producer of Shortbus. We’re just finishing the script and we’re about to show it to investors, probably at Sundance.”

Mitchell later discussed another project he is working on which has me incredibly excited. He told The Playlist, “I’m also working on something with Neil Gaiman. It’s an adaptation of a short story called How to Talk to Girls At Parties. It’s a sort of British, punk-era story that involves an alien girl on her spring break. I’m going to supervise an adaptation with a British writer and eventually direct.”

The story follows Enn, a shy boy whom the more confident Vic encourages to just talk to girls. While at the party, Enn talks to three very nice but strange girls. As he focuses on “making a move” on the girls, it is revealed to the reader the exchange students there are more interplanetary than foreign.

Dash Shaw is best known for his graphic novels Love Eats Brains, GardenHead, The Mother’s Mouth, Bottomless Belly Button, and BodyWorld. Shaw’s comic short stories have appeared in many different anthologies, newspapers and magazines and later were collected in the 2005 book GoddessHead published by Hidden Agenda Press. Some of you may also know him from the pop band Love Eats Brains, a collaboration with James Blanca.

His comics are known for their emphasis on emotional, lyrical logic and innovative design and his work makes a great fit for the direction of John Cameron Mitchell.

I recommend you check out the website for The Ruined Cast, a shared production blog featuring storyboards, animatics, production drawings and other work from Dash Shaw.