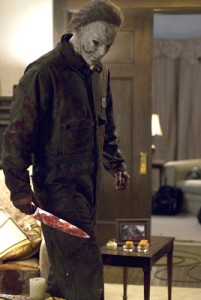 I was recently asked by Horrorblips to chime in on a debate subject that they occasionally ask of their busiest syndicated bloggers. Last time they asked me which of the summer’s horror movies I thought would perform best at the box office and I took the opportunity to slag on Rob Zombie’s Halloween remake sequel since as much as I dislike Rob Zombie and as awful as I’m sure his movie will be, it’s going to kick ass at making money. Yesterday they hit me with yet another opportunity to deal the dirt to Rob Zombie and I just couldn’t pass it up. The question was a simple one with only one correct answer. Sure, they thought they were asking a nice open ended question for discussion, but they’re just being naive because when they ask whose Michael Myers was scarier, John Carpenter or Rob Zombie, the only logical answer any sane person could provide is John Carpenter. If you say Rob Zombie, you’re wrong. I’m sorry to be the one to have to tell you this, but you’re wrong.

I gave them a quick opinion about it but I really felt as though it would make a nice topic for the B-Count because the movie is due in theaters shortly and I also haven’t filed a new Bodycount in quite some time. I’m also a die-hard fan of John Carpenter and I love Halloween, Carpenter’s model for the inevitable slasher movie wave of the early 1980’s. I also have rather strong opinions of Halloween and along with The Film Fiend, had one of the first reviews of the remake to hit the web. Rob Zombie fans were unhappy with my review, which was a wishy washy Polyannaish look at a movie that I later deemed to be a fatal piece of shit. Believe me, I will separate and weigh the ingredients, shortly, as to why I feel that way. But let me start with the positive.

If there’s one thing that appeals to me about Carpenter’s Michael Myers, it’s the simple fact that he has no driving motivation. As far as we know, Myers was wired wrong from the start. His family seems to be your typical suburban nuclear family. We can make no asusmptions about them because they’re in the movie for a very brief spell, but there is nothing about them to suggest that the Myers home is a sociopath factory. There is no talk of abuse, neglect or alcoholism. Michael could be anyone you know. The Myers family could be the people who live next to you and that’s where I find most of my anxiety. There could be a brutal, unfeeling spree killer living right next to you and until he strikes, you’ll never suspect it. There is cold, efficient evil living in the ‘burbs and it has a face just like yours until it covers that face with a crude mold of William Shatner and hits the streets looking for victims without much in the way of criteria to qualify you as their victim. This is good stuff and part of the point Carpenter is trying to make with the movie. All these notions of morality and punishment that people wheel out in the face of every slasher movie when the virginal final girl faces down the killer in the end are unfounded.

Rob Zombie’s Shape, however, is the product of a culture that over-analyzes everything. Zombie pins a Freudian back-story on Michael that does a few things that are worrisome. For a guy whose entire career is saturated in evil, a cross between drive-in horror movies and true crime novels, Rob Zombie can’t seem to accept the possibility that some people are just born evil. He also calls on us as viewers to sympathize with Myers because his mom was a stripper, her boyfriend an abusive drunk and his sister a negligent slut. We were supposed to feel somehow vindicated when Michael finally snapped and made them all pay while accompanied by a classic Nazareth track. Every fan of slasher movies has a favorite killer but we don’t root for them because of some tragic past that we somehow identify with, we root for them because their movies have them creatively dispatching and cutting to ribbons a gallery of ditzy coeds. No one feels bad for Jason Voorhees because he saw his mother decapitated and no one certainly feels any sympathy for Freddy Krueger, a child murderer that was originally scripted to be a pedophile. So why should I give a shit about Michael Myers? I don’t want to shed a tear for him. I want to be afraid of him and Rob Zombie’s Shape just doesn’t scare me.

Each version of Myers is stacked with super powers. It’s just that one director equipped him with measure in order to sow some tension and terror into the movie. He’s always right behind you even though it looks like he never breaks into even so much as a brisk walk. There’s also the matter of taking a couple of bullets and falling out of a window where he gets up and manages to strike again. True, it’s preposterous but when compared to Rob Zombie’s version of Meyers, this scrawny kid who spends his childhood, adolescence and a portion of his adult life in a cramped cell in a psychiatric hospital where he is shown making a variety of masks and not once shown working out, we’re supposed to believe that he magically grows up to be a pro-wrestling grade behemoth capable of breaking steel chains? That’s just stupid.

Though, it took me a thousand words to explain to you the obvious, John Carpenter’s Michael Myers is the winner of the fight. Neither killer is particularly believable but Carpenter is a filmmaker and a storyteller and made all the right moves to deliver a standout killer in the model for slasher movies to come. Rob Zombie is just a horror movie fan that, thanks to a successful career in rock, suddenly found himself in the position, with the influence and funds to fulfill his teenage fantasy of pretending to be John Carpenter. The end product of his fantasy was a poorly scripted and acted movie that is even more embarassing when compared, side-by-side, to the original. 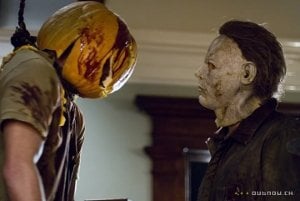