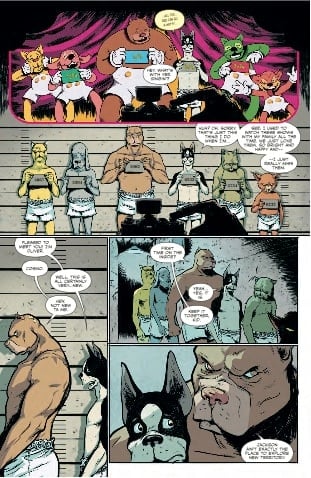 Kennel Block Blues may have plenty of furry dogs and cats with cute names like Cosmo, Frisky, Pickles and a rabbit named Fluppers, but these aren’t your ordinary household pets.  Ryan Ferrier has been involved with a great array of comics over the last couple years that range from The Warriors-esque all female gang of Curb Stomp to the hilarity and smart satirical perspectives in D4VE and D4VE 2. He is great at creating fully realized, emotional characters (even when one is a robot) and appears to have found a new creative funny/dramatic bone to throw in the pages of Kennel Block Blues.

Kennel Block Blues begins with a dog named Oliver who is on a bus ride amongst a super colourful backdrop to a large castle. All the fellow dogs and cats in the bus are smiling from ear to ear, the mountains and trees are smiling, even the castle looks inviting as its windows appear like two eager eyes. Upon turning past the first page, reality is revealed. Oliver is being brought to a looming, depressing facility called Jackson State Kennel. What is revealed here and continues to be played with throughout the issue is Oliver’s attempts to plead ignorant to his oppressive environment and instead paint a wonderful alternative to what is actually happening every time he breaks out into song.

As Oliver is admitted into the kennel, he is convinced that his incarceration is a misunderstanding and was mistakenly apprehended. Oliver’s paranoia is heightened as he meets other locked up dogs, cats, rabbits, and other animals to reveal a tense war that has broken out between the dogs and the cats. Tension rose when Pickles and his band of cats pulled some strings to get Alpha dog Chester in solitary confinement (who is perhaps bouncing a ball repeatedly against the wall) leaving a loyal dog Sugar to do something about it.

Daniel Bayliss has a very textured, confident pencil job that captures the seriousness of the tight bodies of the kennel inmates (except for Oliver and Charlie who will definitely become your new best friend), accentuating particularly tense sequences such as the runaway ball scene, and becomes more loose and playful during the fantastical sequences when Oliver masks the violence that occurs. Bayliss draws some really great facial expressions as well, notable during a back and forth display of wide grins and angry, jarring mouths when a fight breaks out in the cafeteria. 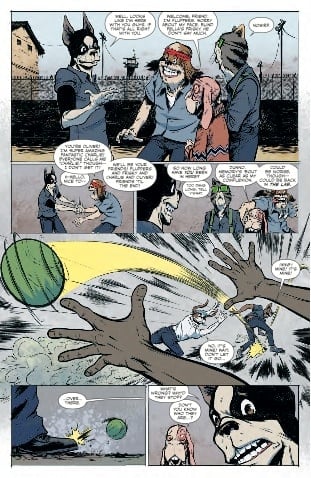 Adam Metcalfe’s colours in the kennel are of muted greys and browns with the occasional pop of a brighter colour or the ruffling of a dog’s mane to really create a sense of claustrophobia but really come out during Oliver’s fantasy sequences that come across like some hyper-real, psychedelic combination of Felix the Cat and Loony Tunes. With the combination of Bayliss and Metcalfe’s impressive artwork, Kennel Block Blues will stand out right away on the stands from its great cover that does a pretty spot on job of giving the reader an idea of what lies inside.

Respect has to be given to letterer Colin Bell additionally for his use of mirroring the style of word balloons with the emotions that the characters are conveying and for the colourful, singsong font during Oliver’s ‘happy place’ moments.

Kennel Block Blues does an excellent job at parodying prison genre tropes through many of its sequences that perhaps shows how beaten down the genre really is but manages to stay fresh and even off-putting at times within this anthropomorphic world. By having animals take the place of humans into positions of vulnerability paints this heightened picture of perhaps what it might feel like for a dog or cat to be put behind a locked fence. As much as there is a lighter tone to Kennel Block Blues, there is a dark underbelly behind the scruffy worried smile of Oliver that becomes even more mysterious upon the issue’s final pages. The creative team has done a great, confident job at setting the balanced tone early. It will be very interesting to see if Oliver will eventually come to terms with his reality or whether his ignorance will get the better of him.