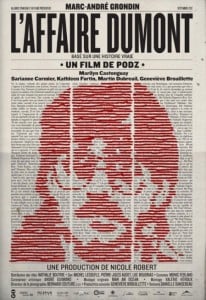 It was only a matter of time before director Daniel Grou, better known to Québec movie and television buffs as Podz, an actor Marc-André Grondin worked together on a project. Over the past few years, each has experienced a rise in popularity amongst the public as well as increasing critical acclaim for their work. In many respects, while Denis Villeneuve arguably is still the Québec filmmaker whose name resonates most loudly at the moment, Podz is certainly not far behind. As for Grondin, ever since his standout performance in Jean-Marc Vallé’s C.R.A.Z.Y. back in 2005, he has been one of the most in-demand male actors in the province. Their first collaboration is L’Affaire Dumont, a familial and court room drama inspired by the real life nightmare experience by one Michel Dumont in the early to mid 1990s, when he was wrongfully accused for the rape of a woman. He spent nearly 3 years in jail for a crime he never committed.

Michel Dumont’s (Marc-André Grondin) life is nothing spectacular. He earns what one may call a living as a corner store delivery man, returning home afterwards to his ailing wife (Sarianne Cormier). Whatever their relationship had been years ago, it no longer carries any sense of passion with it. In fact, as far as the film reveals, animosity and frustration have substituted love and respect. Some friends take care of the children while he is away at work and his wife sleeps off her pain, but even amongst those house sitting their humble domain, relations are strained. Michel’s world is completely throttled the day the police arrest and charge him for the rape of Danielle (Kathleen Fortin), a fellow renter in the same building. Thus begins a near Kafka-esque courtroom ordeal in which, despite that testimonies claim there to have been other people in the same apartment building closely resembling Michel and sporting the tattoos the victim describes (Michel has no tattoos whatsoever on his body), he is inexplicably declared guilty of said crime. As happenstance would have it, it is during the court room session that he meets Solange (Marilyn Castonguay), single mother of three with whom he falls in love. It is while suffering in prison that Solange, despite lack of critical funds, proceeds to work with whatever venues available to her and Michel to prove his innocence. ‘…Marc-André Grondin gives a strong performance, but for some unexpected reasons, the overall movie feels much more like a director’s film than an actor’s film.’

Films of the same ilk as L’Affaire Dumont (films based on true stories that surround a singular figure, biopics being a common example) be they from the Hollywood system or smaller production companies such as the ones in Québec, tend to earn eerily similar reception. The movies are good for the most part, if unspectacular notwithstanding some exceptions, with the main reason to seek the film out being the central performance from an actor or actress. Direction, for the most, takes a back seat, leaving the star of the picture to gleam in the spotlight. With the celebrated Podz behind the camera for L’Affaire Dumont, it seemed reasonable for some to anticipate something a little different in terms of presentation and, having seen the film, that assumption appears to be correct. Unquestionably, Marc-André Grondin gives a strong performance, but for some unexpected reasons, the overall movie feels much more like a director’s film than an actor’s film.

In this day and age when hand held cinematography is the way to go, whether for budgetary reasons or otherwise, it is refreshing to witness a movie in which the picture frame moves around with great precision, caution, and above all else, a deliberate pace. What makes the visual storytelling technique so compelling is in the contradictory effect it produces when considering how precise the angles and pans are. In a courtroom scene during which an individual’s testimony is wearing down on Michel’s hopes of scraping out a victory, the camera is positioned up close on Michel’s head, but just above it at a slanted angle, thus his face is slightly hidden from view. The viewer already knows, from previous scenes, that he is a bit of an introvert, some who does not wear his emotions on his sleeve. The words of the witness are loud and clear, but Michel’s face is basically unreadable. What is he thinking? What is he feeling? Most likely a slew of conflicting emotions and thoughts are rushing through his body, and since he tends to keep his emotions in check, so does Podz avoid the melodrama, avoid the cliché and anything too predictable. Another exquisite moment occurs later on, when, as Michel awaits his appeal, he reveals the trouble he is in to Solange, the woman he has been seeing for a short while. Solange is out of the frame, only Michel can be seen, his right side turned to the viewer, half in shadow, as he awkwardly, embarrassingly explains his predicament. It is these little moments that emphasize the the rich emotions that drive the story. The director succeeds in somehow highlighting what is important by actually underplaying the scenes, the lighting, the camera movements and editing. ‘The director succeeds in somehow highlighting what is important by actually underplaying the scenes, the lighting, the camera movements and editing.’

Adding further artistic merit to the proceedings are the numerous occasions when Podz will rest the camera on a specific figure for a dozen seconds or so in slow motion, all the while either cutting out the sound entirely or highlighting one person’s lines. It is such a simply trick, yet when when in the hands of a capable storyteller, it works wonders. The moment when the judge proclaims the guilty verdict as the victim walks out of the courtroom is one of the most powerful in the film, emphasizing one person’s relief and victory, only for the remainder of the movie is concentrate on another person’s harrowing misfortune immediately after.

Speaking of underplaying things in order for their effect to felt in full force, Marc-André Grondin is very impressive in the role of Michel Dumont. This is a man who prefers to reveal what he feels by acting rather than speaking. He is such a quiet individual, but let that not have the movie goers believe he has nothing to say. It is a testament to an actor of Grondin’s skill to provide the three-dimensionality. It really is a terrific performance, made all the more powerful for how introverted the character is. The acting is subdued for the most part, but never plain. To think that earlier this year Marc-André Grondin played a hot shot, cocky, sex addicted hockey player in Goon… Marilyn Castonguay plays Solange, the rock of the relationship, the fire that keeps Michel’s hopes alive. Her role is not as surprising as Grondin’s, yet her presence is nevertheless a crucial one, not only in the protagonist’s life but for the movie as well. It is, ultimately, important for there to be at least one character who is present and continuing the fight while Michel suffers a great number of ills, especially in prison, where it is learned that sexual molestation is not viewed kindly, even among the inmates.

L’Affaire Dumont seems poised to take over as the main Québec made film to see in the fall of 2012, much like was the case last year with Monsieur Lazhar and Incendies the year before. Apart from one odd decision near the end of the picture to include archival footage of the real Michel Dumont and the woman who falsely accused him (which prompts one to wonder if a documentary would have sufficed), Podz’s film is an effective, calculated affair.