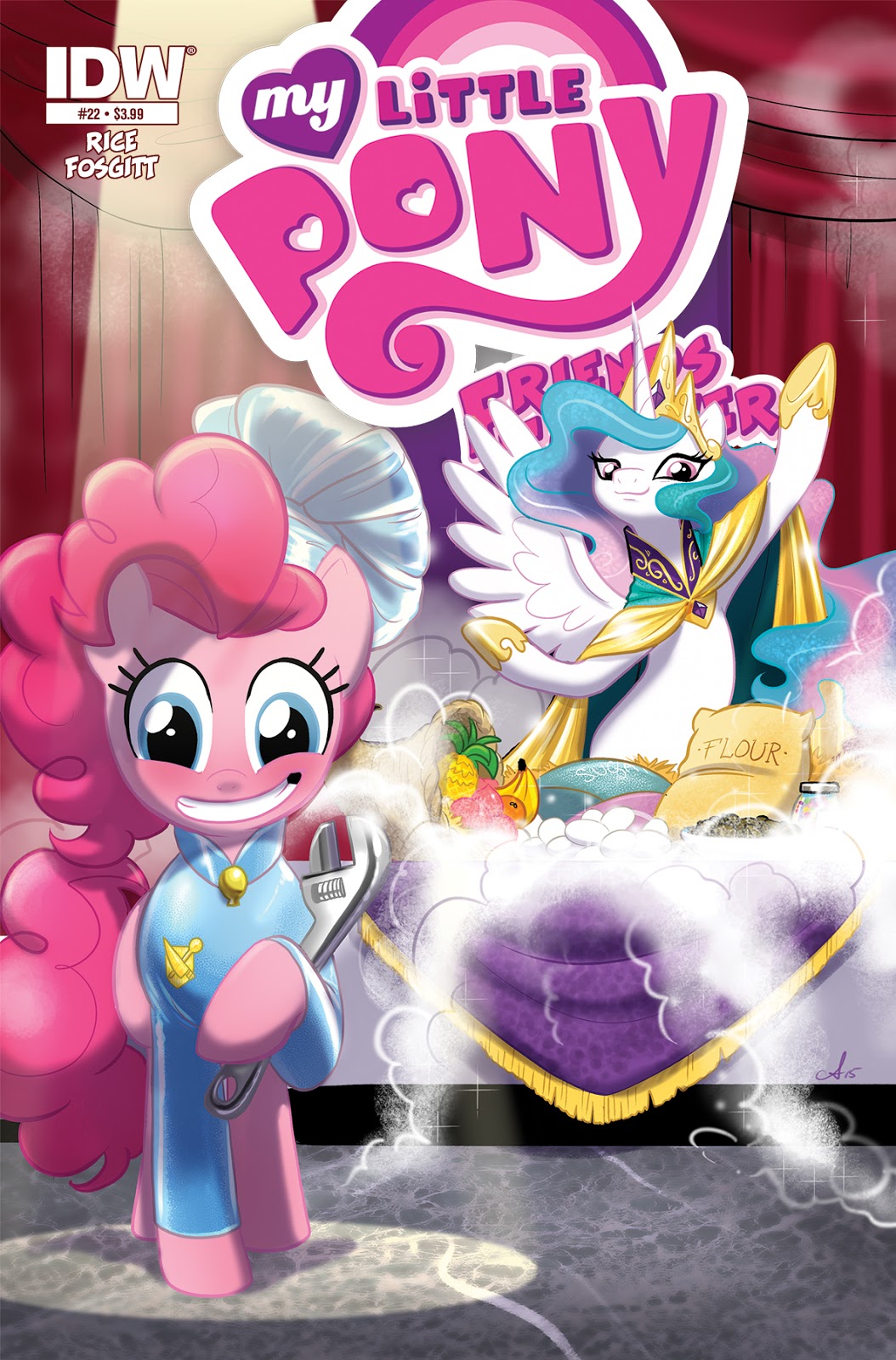 My Little Pony Friends Forever # 22 has Twilight Sparkle and Pinkie Pie on their way to assist Princess Celestia with the birthday celebration of Princess Luna. It is a slice of life story with Pinkie in the lead as the cake creator for the joyous day. It appears to be a fairly benevolent story with what appears to be low risk silly plot line and funny expressions. For Pinkie Pie, it shows the trying effort of working on a creative project with little direction. But the real star hidden on the sidelines is Princess Celestia. Her desire for everything to be prefect comes from her complex relationship with Princess Luna. There is much hidden remorse with Celestia about the banishment of her sister. The artwork of Jay Fosgitt can come off as too simplistic or too rubbery that characters lack expression. Yet the writing from Christina Rice maintains a tender sweetness, which more than makes up for the artwork.

The story opens with Twilight and Pinkie Pie on a train to meet with Princess Celestia for a special task. When the two ponies arrive to meet her highness, it is revealed Celestia needs the help of Twilight to give an endearing speech about Princess Luna’s achievements history because Princess Luna’s birthday is coming up.  For Pinkie Pie, Princess Celestia requires the party pony planner to develop a cake for her sister. The problem about the request is Princess Celestia rejects several cakes attempted by Pinkie Pie.  Pinkie Pie soon runs into trouble as she cannot find the prefect cake for the celebration. It comes down to the party pony planner to find a solution to the problem.

The writing comes with sweetness to it from the different characters alongside a strain of subtle sadness. The sweetness of the story comes from Celestia because she places all of her effort and hopes in throwing a nice party for Princess Luna. The sisters have been recovering from the strained relationship of the one thousand years of banishment.  Princess Celestia tries to do right by her sister, even if the party is a small part. It is sweet and also very bitter as it show the heaviness between Princess Luna and Princess Celestia as they work to rebuild their relationship. Rice’s writing for Pinkie Pie provides a spot on presentation of the character. Rice shows Pinkie Pie as not only as impulsive, silly, and happy go lucky as the show. But Rice shows the depth of Pinkie Pie as she struggles with finding the prefect cake and rakes her mind over it.  Overall, Rice’s work is touching.

Rice and crew go a fine job making a story that is Pinkie Pie driven. There are plenty of funny moments as there are earnest heartfelt moments. It is a delightful slice of life piece. Its artwork can be hit or miss depending on the page. But Rice’s writing provides much in its portrayal of the characters and comic setup. Give it a read.