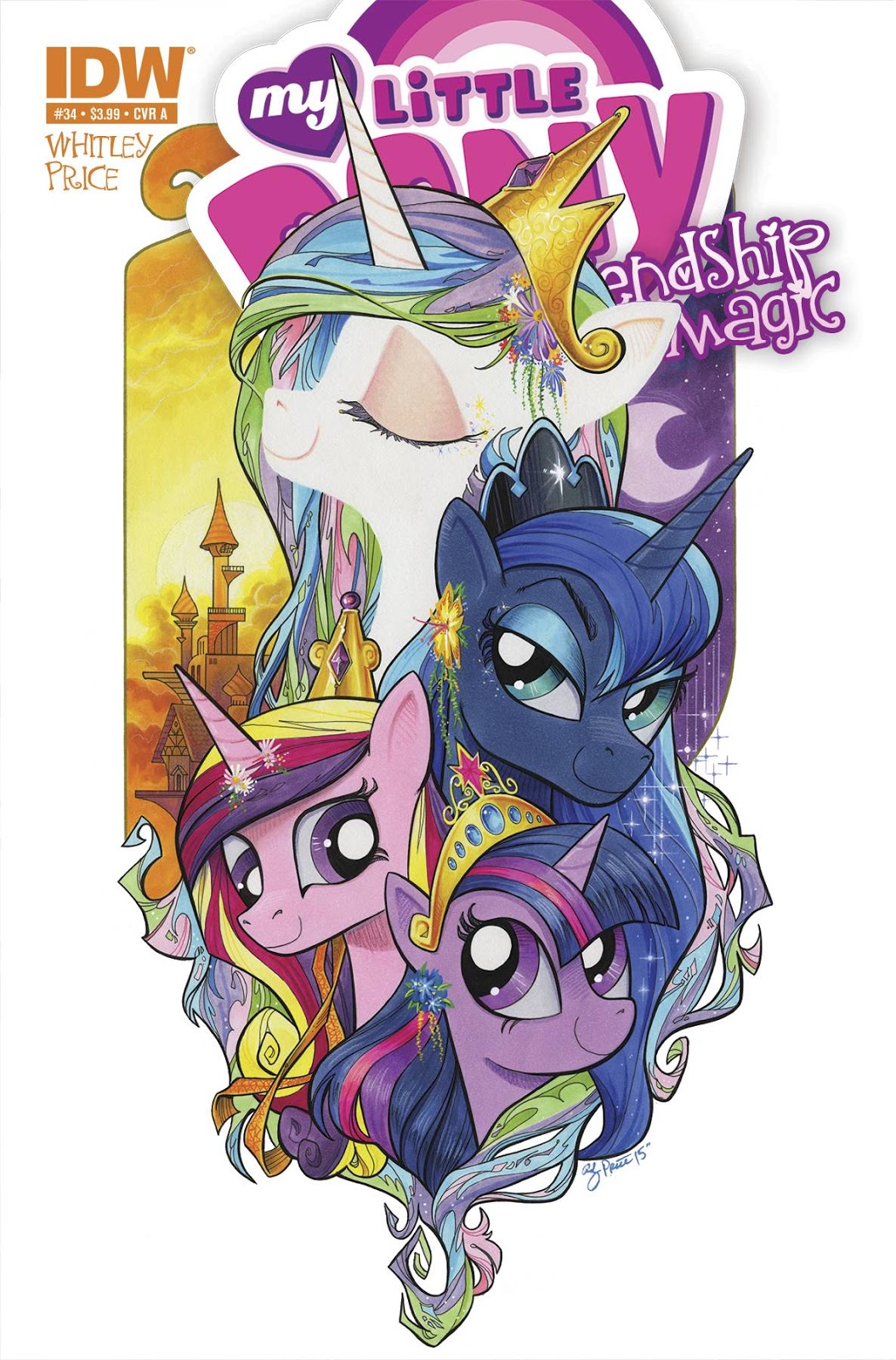 My Little Pony: Friendship is Magic tends to be either about the slice of life events of the main six ponies such as issues of being a good friend or a town fighting against itself. Yet, on the occasion between the daily events, there are the beginnings of an epic tale. My Little Pony Friendship is Magic #34’s plot unfolds with masterful pacing and an exciting battle in the middle of the story. Price’s art conveys both the humor of the series and outrageous battle scenes while truly showing the conflict behind the villain characters. Whitley’s writing matches the tone and mood of the artwork as the plot builds to a grand story. Together, Price and Whitley bring to life the promising start of a big showdown between the main six and the villains of the past.

Price’s artwork is well designed and carefully thought-out to provide the story with flow and appropriate mood. The opening scenes of the comic depict a moody and dark tone to match the opening lines about a prison in the Crystal Empire to hold most foul villains. Colorist Heather Breckel contrasts this moody and dark tone by opening in a snowy field with cool colors and a lone figure traveling through the land. Price adds in fine details with buildings and background ponies to make the environment feel lived in. For example, Price includes small shops and background ponies to the fair scenes. Most outstanding of all is Breckel’s choice of color palette. The shading and color choice make for dramatic and appropriate scenes.   The movement in each image give a clear idea of how the emotions relate to the dialogue of the scene.

Whitley delivers in action, humor, and a firm understanding of the main six’s personalities, especially Twilight Sparkle. The plotline rolls out with full force as the mysterious pony gathers together the villains for her own plan. Whitley wastes no time in making the narrative flow from the setup of the conflict to the playing out of the evil plan. Next, the humor comes from the setup of situations such as when Pinkie Pie tries to take on Iron Will with a cannon and her dialogue that whole scene. Yet, it is Rarity who starts the cannon. The dramatic build up, which is only cut short makes the scene hilarious. Whitley  displays a good knowledge of how each of the main six should react to the plotline. The greatest of the six is Twilight Sparkle, who shows logic and kindness as the villains file in for the fair.

See also  'ABCs Of Death 2' Search For The 26th Director Twelve Finalist #1: 'M is for Mailbox'

My Little Pony Friendship is Magic #34 does break away from the normal charm of the slice of life times of the ponies. It comes with a hidden and darker tale to be told at the end of the comic book. All together it is very good story with grand artwork. It surely is a stunning opening to a new arc.