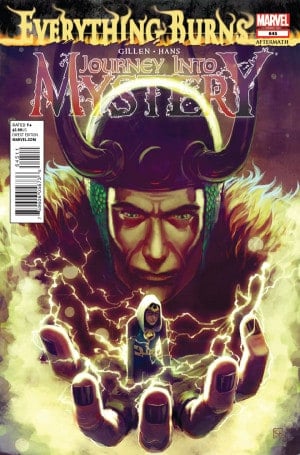 Kieron Gillen’s run on Journey into Mystery #622-645 is really the closest Marvel has come to telling a long form urban fantasy story about stories like Vertigo’s Sandman , and it survived multiple art shifts and even an extended crossover with the Fear Itself event. The premise of the series is ingenious as in the aftermath of the Siege event (which involved the much maligned and overused by Brian Michael Bendis character, the Sentry, finally getting thrown into the sun by Thor.), Loki has been resurrected as a child and hopes to avoid his villainous destiny.

Unfortunately, his older, more villainous self has returned as the crow, Ikol, and Kid Loki is mighty tricky along the way scheming like a bastard and traveling all over from Asgard to England in the damn fun “Manchester Gods” arc and even Hel finally. And, along the way, Gillen and his artist collaborators introduced a vast array of characters, who still play a big part in the Asgardian side of the Marvel Universe in titles like Angela, Queen of Hel, including Loki’s lover Leah, who was made from the literal hand of Hela, his hellhound Thori, and the cursed Valkyries known as the Disir.

The series comes to its emotional and metafictional climax in Journey into Mystery #645, which gives the definitive answers of why Loki decided to come back as a child as Gillen teams up with artist Stephanie Hans, who excels at tragic beauty and who you may know from the Amaterasu story in WicDiv as well as the flashback stories in Gillen and Marguerite Bennett’s Angela comics. This issue is like the final scene of a five act tragedy as even though Loki’s magic pen has come in handy against such foes as the Serpent, he can’t use it to write a happy ending for himself. His fate is in the hands of the Teller, a vague shadowy figure representing Gillen or perhaps the dozens of writers, who have and will write Loki in the Marvel Universe from the ugly Stan Lee and Jack Kirby Avengers assembling villain to the tricky fellow running for president in the upcoming series Vote Loki from Christopher Hastings and Langdon Foss. 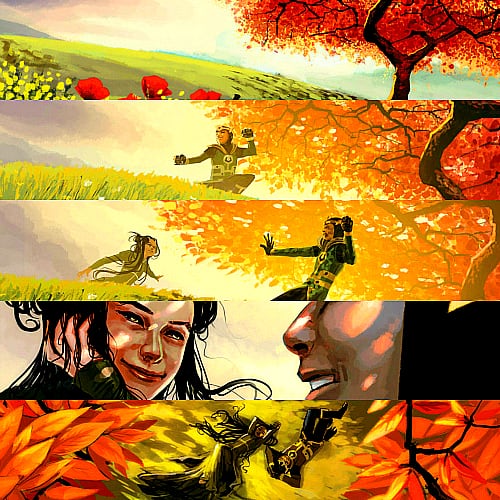 It’s a cliche repeated by stories and sources as disparate as Game of Thrones, Doctor Who, and freaking Eminem, but words are truly weapon. And Loki even as a youngster is one of the greatest wielder of them as he crafts plans, schemes, and alliances trying to redeem his name while occasionally falling by the wayside. Gillen’s voice for Loki is sharp and witty, and he’s always ready with a sassy rejoinder, pun, and even a pop culture reference as he gets used to living on Earth. (This humor continues in Young Avengers, especially with Loki’s love for breakfast food.) But he gets positively laconic in Journey into Mystery #645 as he says goodbye to Leah, Thor, the Disir, and accepts his fate as his older self kills the young Loki looking for redemption while still staying in his younger body. He just wants to get his defeat over with as his older self gets the sharp one-liners, like “The house always wins”. Throughout the issue, Hans draws the older, evil Loki as towering over his younger self from the cover to the end as Loki can’t evade his villainous future. (Or past. Yay, for de-aging, time travel, and sliding timelines.)

The combination of Hans’ art and her use of close-ups as well as juxtaposing bright, vibrantly colored scenes with dark ones becomes the emotional core of the book. The silent montage of Loki and Leah playing in a field like anyone who ships them’s dream juxtaposed with the black “The End” is a knife through the heart. And the tone shifts from Young Loki battling for redemption to him reveling him in triumph over his older self even as he becomes the evil person that he tried to avoid being. Hans’ art gets super expressive towards the end with flames everywhere, and Loki’s face bearing a particularly tortured expression as he cradles the horn helmet that symbolizes his villainy. (Thanks Jack Kirby for that one.) The final panel is kind of a mic drop as the teary eyed Loki faces the readers and says, “Damn you all”, like he just wants a moment alone to mourn for all the potential that he is lost.

See also  'Operation S.I.N.' #2: lasers and spaceships in the motherland 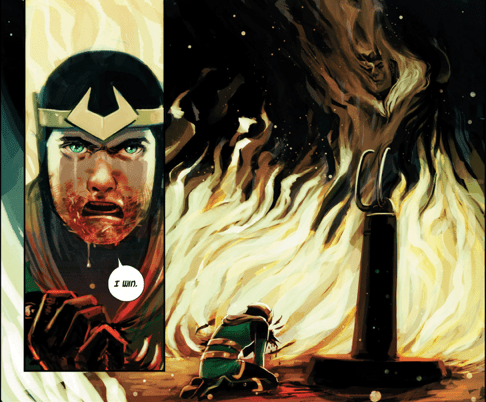 The ending of Gillen’s Journey into Mystery is super sad as the surprisingly likable rogue that even charmed Tom Hiddleston’s heart doesn’t find change and made the Internet lose its mind almost in preparation for WicDiv. But the most heartwrenching part for me personally is his last goodbye to Thor with whom he actually has built a relationship with throughout Gillen’s run on Journey and Matt Fraction’s corresponding run on Mighty Thor. Hans draws Loki’s eyes like a sad child, and Thor reassures him about everything be okay and that he won’t stumble from the straight and narrow. Boy, was he wrong. But it’s nice to see these two usually antagonistic brothers share one last moment of friendship that began with Thor bringing Loki back from the dead. Gillen gives them a dynamic that Hemsworth and Hiddleston would be jealous of.

Like most of his works (Kohl in Phonogram, Luci in WicDiv off the top of my head) , Kieron Gillen takes a character that could be a one note mischievous villain or just a plain ass and makes you emotionally connect with them for some reason or another whether it’s Kohl’s love for pop music, Luci’s charismatic rebel streak, or Loki’s attempts at changing his status as the god of lies. (He is the exact opposite of Morpheus in Sandman, who refuses to change.) Add some emotive cartooning meets Renaissance style frescoes from Stephanie Hans, and you’ve got yourself one literal hell of an ending.

Because even trickster gods have feelings. Play “Love will Tear Us Apart” by Joy Division while reading the Loki/Leah scenes, and you’re seven times more likely to cry.