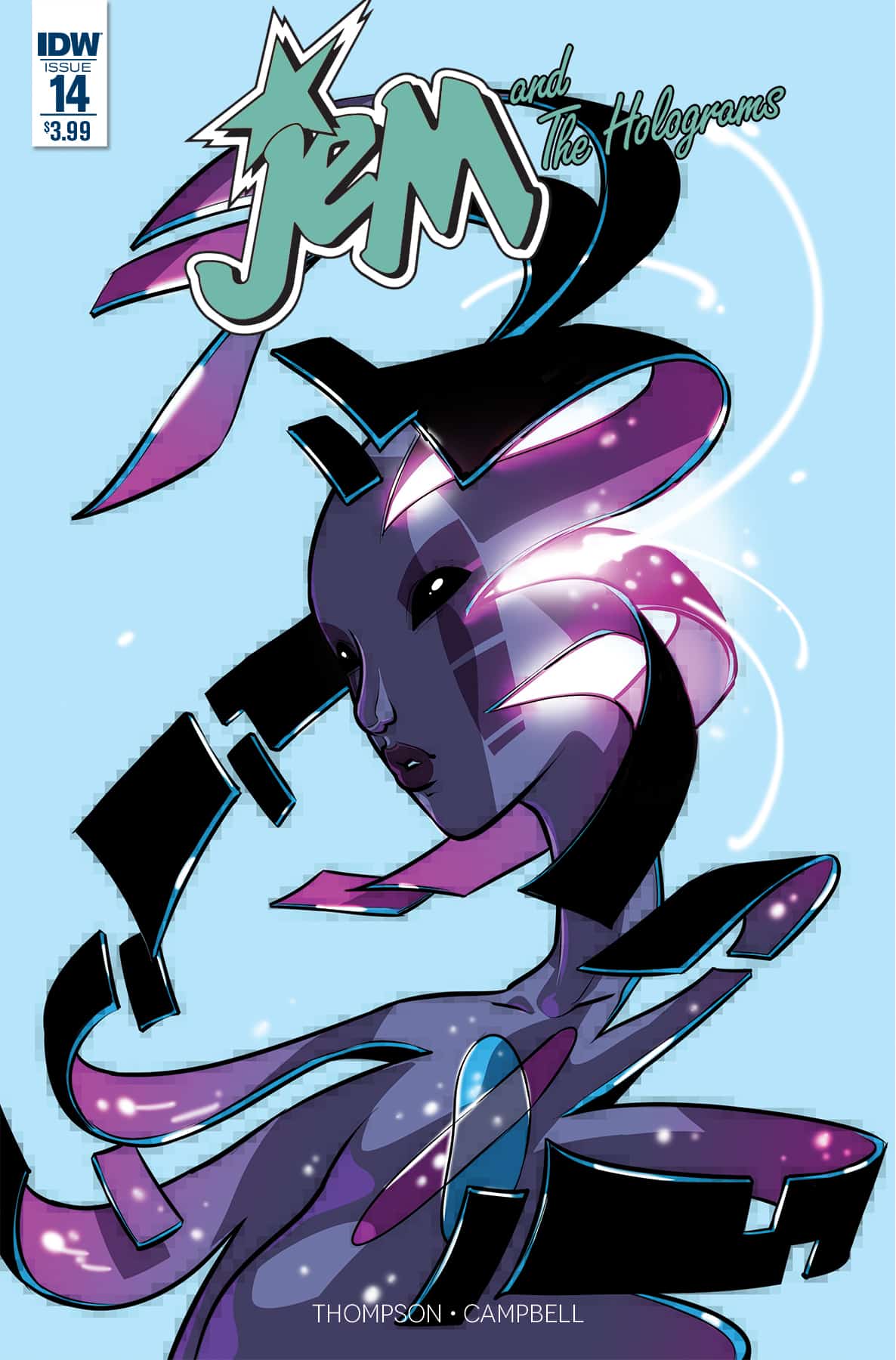 In an issue that seems to largely advance the plot, Kelly Thompson and Sophie Campbell take the time to linger on both bands’ insecurities and conflicts, reunite the divided couples, and develop Pizzazz’s familial backstory in Jem and the Holograms #14. A final tease of the showdown with Silica to come leaves the reader antsy for more.

The highlight of the issue for me emotionally was actually a low-point for a character. Pizzazz’s relationship with her father gets explored, and it ends up offering heavy helpings of both sympathy for our ailing Piz and insight into why she is the way she is. Vulnerability connects her to the audience but also illustrates why she would normally push it away. When those who are supposed to love you the most don’t, allowing anyone to love you at all is near impossible.

Other spots where the emotional lives of the characters were being explored fell flat. Both bands are in emotional chaos–the Holograms over the decision to shut down Synergy and the Misfits over their seemingly disastrous performance. On the Holograms’ side, Kimber, rather than being the heart of the group, determined to hang on to her dream of performance and her surrogate mom, grates like a whiny child with her retorts and misguided snap decisions. The scene with the Misfits works a bit better due to the snappy pace of dialogue and comedic visual touches. But overall, everyone seems overcrowded in the panels.

Nonetheless, Sophie Campbell continues to show off her gifts of subtly building character emotion, as when Jerrica takes off her iconic star earrings as the band discusses shutting down Synergy for the good of humanity. Her design work explodes off the page at the beginning with Clash’s make-up and hair and at the end with the reveal of Silica to the Holograms. A shark’s jaw for an anklet? A bat’s wing out of one side of her head? Deliciously gothic. I hope it inspires cosplay.

While the reunions of the various Holograms with their respective loves were cute, and I especially enjoyed Aja catching Craig in her arms, the plotting around the various pairings felt plodding. Furthermore, the decision by the Holograms to wait until morning for their next move felt like a plot contrivance to make room for malts and cutesy kisses and to allow the together-we-stand plans to fall apart, leaving the Holograms at a disadvantage once again. Since it seems we’ve already got too many moving parts in this arc–bands, significant others, groupies and managers–the introduction of another band at the end of the issue fills me with apprehension.

Overall, this felt like a weak link in the arc, but I trust that it’s doing its part to build to an outrageous finale.