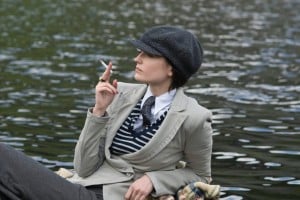 The opening scene of Cracks is very Madchen in Uniform, as the innocent 1930s school girls stuck on a remote English island sing their hymns, awaiting the arrival of the figurehead: Miss G, the striking, eyeliner-wearing cool teacher, the one the girls all have a pash for, especially head girl Di. But then an interloper arrives, a rival for Miss G’s affections in the form of the exotic new girl, a Spanish aristocrat called Fiamma, and everything goes wrong…. It’s all set up for a cracking drama. Or comedy. Except director Jordan Scott plays it as a kind of gothic melodrama, with the suggested seething passions reduced to endless shots of girls diving into the water under the watchful eye of Miss G. Regaling the wide-eyed girls with tales of imagined travels to faraway places, when it turns out she’s not been beyond the island in years, Miss G flatters to deceive.

Eva Green’s portrayal of Miss G is the great weakness of the film. With her affected speech, visual tics and her rolling eyes, Green appears to be going for a crazed predatory lesbian characterization, rather than something more subtle. The scene in which Miss G takes Fiamma back to her room under the guise of protecting her is plain creepy. And the scene in which the girl begs for her inhaler once she’s collapsed with an asthma attack is dragged out too long. Again, very creepy. Too bad, as it might have been played much, much more subtly, allowing for some understanding of how Miss G could be a crush object and role model for the girls, even given her flaws. How much better if they had had a teacher like Ms. Rain, dedicated, patient and encouraging of the most awkward kids, even Clarice “Precious”  Jones, who arrives at the alternative school in Harlem having been expelled from her own for being pregnant. Precious is also being beaten by her mother and, having been called fat and stupid for her entire young life, is at a low ebb. Learning to read and write is one step in a long road to self-fulfillment, but Ms. Rain sees greater promise in Precious’ future. A real tear-jerker, Precious is visceral film-making of the highest order and, while the violence is hard to watch, it is not sensationalized. Mo’Nique as the mother and Gabourey Sidibe as Precious are impressive foils, complex characters locked in a battle of self-loathing and thwarted aspirations – but only one will emerge with any respect.

An Education
Director by Lone Scherfig Far less dramatic is An Education‘s setting of Twickenham, a suburb just outside swinging London, but culturally far, far removed from the metropolis. Here clever school girl Jenny dreams of visiting Paris, being accepted at Oxford and just getting away from her stuffy parents. When she meets the seemingly refined David, she thinks she has arrived in society, as he takes her to supper clubs and to meet his terribly glamourous friends. But, David’s not all he seems and Jenny, having burned her bridges at school, must call on the assistance of her English teacher, Miss Stubbs, whom she had earlier scorned as leading a dead life. It seems Jenny is not so clever, after all. An Education could have been a biting satire on class or a farce on sexual mores. It sits uncomfortably in between, a gentle nudge in the ribs at suburban mores. Emma Thompson is wasted as the headmistress, who only appears in a couple of short scenes. One wonders what Thompson, an Oscar-winning screenwriter, might have done had she been let loose on the script.