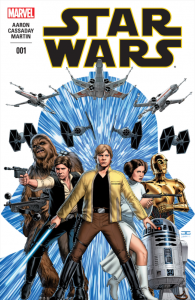 Star Wars #1 marks the return of the Star Wars license to Marvel Comics, following parent-company Disney’s acquisition of the Star Wars brand and the expiration of Dark Horse Comics’ license to the property, the first of four new series (for now) to which Marvel intends to apply their considerable skills at comic book making (Dark Horse had been publishing Star Wars comics since 1991, while the first Star Wars comics launched at Marvel in 1977 with an adaptation of the first film, which led to an ongoing series that ran for 110 issues; both sets of stories have since been re-branded as non-canonical “Legends”).

The key to a good Star Wars comics (especially one set during the Original Trilogy and featuring the films’ main characters, as opposed to a Legends tale featuring original or supporting characters) is tone. There’s a certain tone that the best Star Wars comics manage to nail, a delicate balance between taking itself seriously and still being fun, getting the character voices right but not just parroting familiar dialogue constantly, and not being too obviously comic book-y but still using the medium to tell stories in a way that film can’t.

Thankfully, Star Wars #1, above all else, strikes that necessary tone. 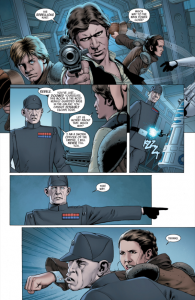 In this issue, writer Jason Aaron and artist John Cassaday succeed in crafting a tale that feels like Star Wars. The characters sound and look like their movie counterparts, and the plot of the issue (involving a Rebel infiltration of an Imperial weapons factory that, not surprisingly, goes sour) works well as a follow up to the events of the first film. It’s not hugely epic and cinematic, but it doesn’t need to be. It does need to fit the tone of the films, and it does. Aaron shows a good grasp of the characters’ voices, and admirably manages to avoid dropping too many knowing winks at the films into his dialogue (he does play around with one of those winking bits, to decent effect). Cassaday is, of course, a top industry talent, so it’s no surprise that the art is fantastic. Cassaday is no stranger to comic book action, and not only do the characters resemble their movie counterparts visually, his panel and page layouts give the book a cinematic feel (the opening pages and the cut to black at the end of the issue create the sensation of watching a Star Wars movie, especially when read on a tablet) but still honor the medium (such as in how the final-page cliffhanger is set up).

This is, of course, but one chapter in a larger story arc, and thus, like most series’ first issues, feels a bit like the best stuff is starting to happen just as the issue comes to a close. But that’s an important frustration, to both the medium of comics and as a nod to the Saturday afternoon adventure serials that inspired Star Wars in the first place. This issue creates the sensation of wanting more, both because of its effective ending (which makes it clear Aaron & Cassaday are willing to do something a lot of the previous Star Wars comics were always very reluctant to do/forbidden from doing), and because the issue succeeds so well at recreating what makes Star Wars so much fun. 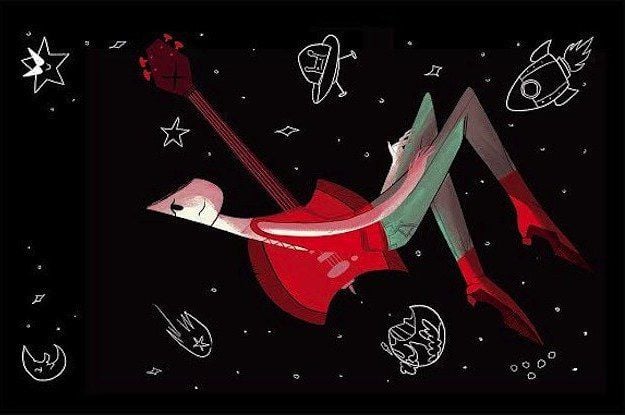