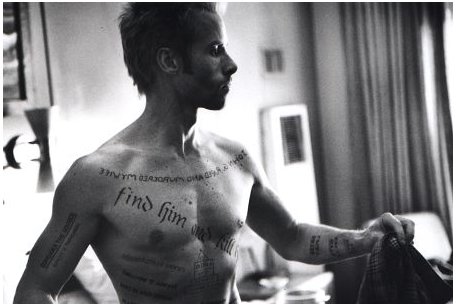 Narrative complexity, today, is firmly the domain of thrillers (read: hyperkinetic activity). Entire projects hinge on “gotcha” plot twists, powered at best by unnecessary opaqueness and at worst by sheer contrivance. The moment I realized that Inception would be a merely good movie, and not the great movie that I, as a fan of his best film to date (Memento), hoped for, arrived during Ariadne’s interminable tutorial through the logic of Dreamland and the DreamTeam’s subsequent hatching of their dreams-within-dreams-within-limbo scenario. It was clear then Nolan had fun writing his script, but as with all good thrillers, the feeling lingered that all those thrills were just that, and interchangeable, too. Inception left me predictably thrilled at all the right moments, especially the zero-gravity sequence. But at movie’s end, even the uncertainty generated by Cobb’s perpetual spinning top (is he still…?) dropped off as soon as I left the Cineplex, still shell-shocked from the noise and the light, and I had the most dispiriting thought that one can have ever going to the cinema: it was just a movie.

Which is why I’d like to shine a light on Memento, his 2000 film, while trying to mitigate any spoilers for the unlucky ones who have yet to see it. Memento and Inception share more than a director. They’ve both been reviled as gimmicky and revered as “cerebral.” They both, in their own ways, explore how one might come to distrust what underpins the world’s reality. And they both feature main characters who are left slightly unhinged by the death of their wives (and even then, the illusory nature of those dead wives remain to haunt them).

Leonard Shelby (played by an excellent Guy Pearce) is a former insurance claims investigator who was struck with anterograde amnesia after a brutal home invasion left his wife dead and his life in tatters. His condition renders him unable to form new memories, which means that although he is able to remember every detail of his life from before the accident, he is now obliged to write down everything he doesn’t want to forget in a matter of minutes on pieces of paper and even tattoo them onto himself. This recollection obsession stems from his desire to track down and kill one of the assailants responsible for his wife’s murder, known only from a previous police tip as John G. In essence, Leonard is a blind vigilante, hobbled by his Day 1 memory and forced to rely on complete strangers (literally) who may or may not have his best interests at heart, considering his affliction.

The major “hook” in Memento, for those who don’t know, is that the plot mostly occurs in reverse chronological order, interspersed with a series of chronological black-and- white sequences that initially seem completely uninvolved with each other. What might prompt me to declare Memento the superior film? It has to do with the fact that my periods of confusion in watching Inception owed, annoyingly enough, to the multitude of strands I had to hold in my head to be able to enjoy the movie, whereas in Memento, the novelty of the narrative structure unfurls with a nerve-wracking (but lucid) grace. The confusion that a viewer might–no, will–feel while watching Memento is absolutely necessary for the film, in terms of plot and thematics, to work. It forces the viewer to fully inhabit the frustration of Leonard’s recurring amnesia. And the way that the movie doles out answers to its riddles just wouldn’t work if the story were told in a linear, forward motion. In other words, it represents one of those rare occasions when form and function are (beautifully) one and the same.