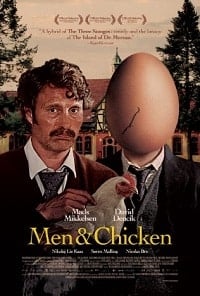 Men & Chicken, the new absurdist dramedy from Danish director Anders Thomas Jensen, is a feast of delicious weirdness.  But a funny thing happens amidst all the bizarre imagery and disturbing sexual revelations; you come to genuinely love these oddball characters.  Its endearing sweetness makes it the unlikeliest of twisted fairy tales, extolling the virtues of family, loyalty, and questionable animal husbandry.  For those who can dial-in to the appropriate wavelength, the fascinating Men & Chicken will make you laugh and cringe in equal measure.

Gabriel (David Dencik) and Elias (Mads Mikkelsen) aren’t exactly what you would call ‘normal’ brothers.  In fact, Gabriel is sickened by the very sight of his bird-like brother, literally retching when the two are forced to touch.  Elias worships Gabriel, however, and is constantly scheming for more quality time with his snobbish brother.  After their father confesses in a posthumous VHS recording that he is not actually their biological father, Gabriel sees one last opportunity to prove that a cretin like Elias couldn’t possibly be his brother.

And so the two brothers travel to the bizarre Danish island of Ork (pop. 41) to visit their reclusive biological father.  To Gabriel’s chagrin, he discovers three even more freakish half-brothers living in an abandoned sanitarium with his father.  There is the elder Franz (Søren Malling), who instills order by beating his siblings with various stuffed animal carcasses (“He beat me with a stuffed beaver!”).  Gregor (Nikolaj Lie Kaas) is the hapless but goodhearted brother who dreams of being with a girl.  Finally, there is the portly Josef (Nicolas Bro), who spends his days creatively interpreting books and obsessing over fine cheese.  Josef’s achingly-literal interpretation of the Biblical story of Abraham and Isaac might be the funniest scene in film this year. 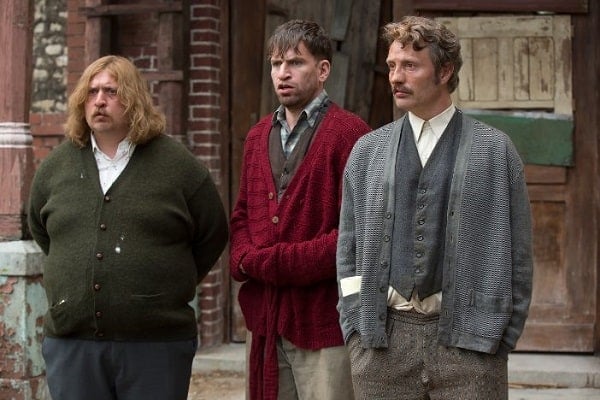 It’s almost impossible to fathom the sheer nuttiness of Men & Chicken.  This is the first feature from Danish writer-director Anders Thomas Jensen in 10 years, and he’s clearly spent countless hours living in this delirious world.  The real beauty of his intricate script is that seemingly gratuitous flourishes come to have greater meaning later in the story.  This isn’t simply weirdness for weirdness sake; every peculiarity contributes to an unorthodox mystery that remains frustratingly murky.

Carrying us through the frustration is rich, absurdist humor with a healthy dose of slapstick brutality.  Cast adrift by society, the three half-brothers have created their own rules, most of which involve concussive head trauma and overnight stays in the dreaded ‘cage.’  There are also moments of sublime sweetness, as when the brothers dress in their summer whites for a spirited game of badminton.  That everything eventually disintegrates into a physical confrontation doesn’t diminish their love for one another.  It’s kind of like The Three Stooges, only with more harelips and barnyard animals. 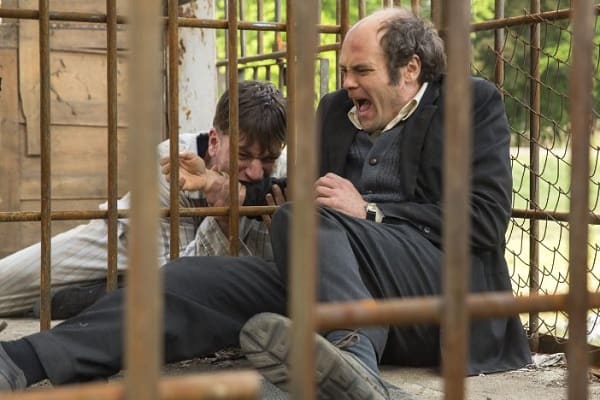 The set design in the old sanitarium is impeccable.  Jensen fills every corner of the screen with menacing mementos and half-told anecdotes.  We don’t know why a bull named Isak the 8th is living in the house, for instance, or why there are chickens with cow hooves clopping around the grounds.  Most importantly, we don’t know what’s waiting to be discovered behind a barricaded basement door.  It’s a credit to Jensen’s clever storytelling and mastery of tone that we’re dying to solve these mysteries.  The sanitarium is an endless labyrinth of possibility and bodily horror that would make Lynch and Cronenberg proud.

Everything that makes Men & Chicken captivating, however, resides in the startling characterizations and performances from the cast.  Mikkelsen is damn near unrecognizable as the inexplicably cocksure Elias; a man so obsessed with masturbation that he carries around a roll of toilet paper for easy cleanup.  As the perpetually flustered Gabriel, Dencik serves as the film’s rational core.  He’s a man who could enjoy a semi-normal life were he not so obsessed with proving his normalcy.  The half-brothers grim—Josef, Franz, and Gregor—love each other so passionately that any dispute turns into World War III.  Just deciding who gets to eat dinner from the treasured ‘dog plate’ (which has been lovingly glued back together countless times) almost requires U.N. mediation. 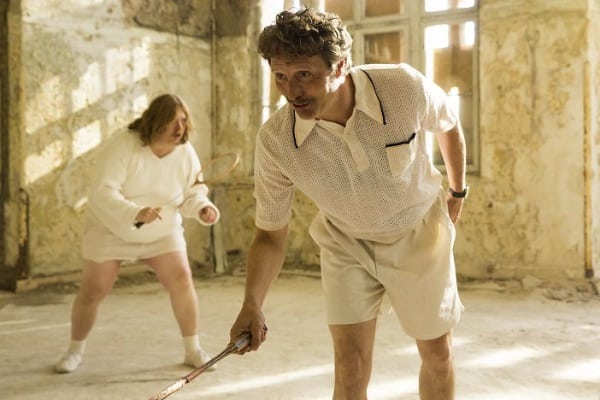 Unfortunately, Men & Chicken has one massive flaw that stains some of its goofy charm, which is a disturbing undercurrent of sexual predation towards women.  Though none of the men carry through with their single-minded plans of molestation, it’s only because the women they encounter are equally desperate for sexual attention.  Still, it’s uncomfortable watching men divvy women like potential breeding stock, which makes the resolution of their lecherous scheme feel like nothing more than a convenient cheat to absolve them of wrongdoing.

Still, Men & Chicken is a singularly strange viewing experience that adventurous cinephiles will love.  Pinging between Kafka and Kaufman, there are almost too many visual oddities and guilty pleasures to digest in one viewing.  Genuine cult classics are a rarity in these ironic times, but Men & Chicken definitely has the enticing mix of heart and surrealism to qualify.