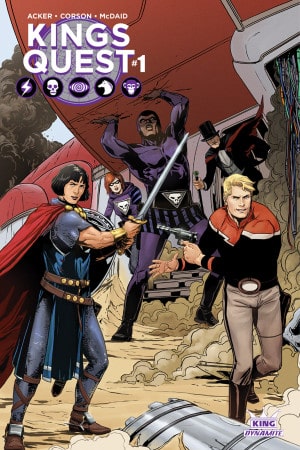 Kings Quest #1 features the Avengers or Justice League of pulp adventure heroes that made their debut in comics strips published by King Feature Syndicate in the 1930s. The team lineup is Flash Gordon, Dr. Zarkov, Mandrake the Magician, Prince Valiant, the original Phantom, and a new female Phantom, Jen Harris, who works at the same newspaper as Dale Arden, a Flash Gordon supporting character. She is the audience surrogate character, who only goes on a mission to the Planet Arboria to save her friend Dale from Ming the Merciless, and is struggling at the beginning of her heroic journey. Writers Ben Acker (Thrilling Adventure Hour) and Heath Corson (Bizarro) use her narration to keep the mood both light and tense as the “Team Supreme” lands on the planet Arboria and is immediately attacked by random animals and the adopted godson of Man-Thing and Swamp Thing’s second cousin.

Artist Dan McDaid gives each hero a showcase panel or two to show them in action from using scratchier art to depict Mandrake the Magician terrifying Ming’s goons to a full page spread intercut with white gutters to show Prince Valiant going medieval on some other goons. Even Jen gets a nice kick in. McDaid’s art is really similar to the cover of old pulp magazines with his characters mostly staying in iconic poses. Some of the facial expressions seem rushed, but he, Acker, and Corson land a powerful emotional blow on the final page by obeying a simple storytelling rule, which is framing characters in close-up when you want audiences to feel for them and from long distance when you want to laugh at them. This final page reveal also cashes in nicely on Acker and Corson’s focus on the character of Karen, her relationship with Dale, and cold feet about doing the whole intergalactic hero thing.

And even though Kings Quest #1 ends on quite the dark twist in which it makes a reference to the 1980 Flash Gordon film for non-comedic purposes, it’s an upbeat read filled with action and quips galore. Acker and Corson use plenty of ensemble superhero tropes, like damsel in distress and fight, then team up, but they indulge in the weirdness of these old school to make these tropes not revert into cliches. Basically, a character named Jungle Jim, who speaks in a Cockney accent, is a huge Phantom fanboy, and can turn his body into flora and fauna, shows up and steals the entire comic and shows that he’s much more than a Tarzan ripoff. Rights issues be damned, I would love to read a comic where he teams up with Tom Bombadil from Lord of the Rings and trade antiquated British slang terms while making nature do wild and wacky things. All in all, when Jungle Jim appears, Kings Quest #1 gets vastly more entertaining and hilarious as even Ming the Merciless’ almost mindless henchmen have to suspend their disbelief when a walking tree/bush person starts pawing at their spaceships.

In, Kings Quest #1,  writers Ben Acker and Heath Corson craft a relatable POV character in the “other Phantom” Karen, keep a winking sense of humor throughout the story, and let Dan McDaid and Omi Remalante draw and color plenty of punching, kicking, sword slicing, and mysticism from the various members of Team Supreme. It’s a fun introduction to these classic characters for the summer superhero blockbuster generation. (Which includes me.)