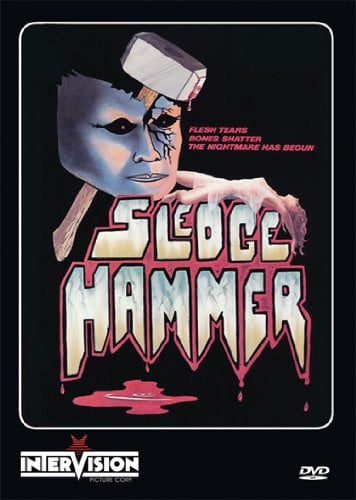 All week long I’ve been talking to my friends about how much I miss the old VHS format. Yes it was incredibly inconvenient to rewind the tapes once you were done watching the film, and yes it was a pain in the ass when you had to adjust the tracking, but DVD cover art has never once come close to matching that of the video cassette boxes we once collected. There is just something about VHS, that I’d rather showoff my collection in my living room than those BLU-rays or DVD’s I’ve collected over the years. Maybe it’s  just because it reminds me of when I was younger but regardless the following news is pretty awesome.

Mondo, the collectible art boutique arm of Alamo Drafthouse Cinema, has decided to launch their very own VHS label called Mondo Video, and their first release comes out this week, the 1983 cult horror film Sledgehammer directed by David A. Prior. The film was notorious as the first shot-on-tape ‘slasher’ thriller for the then-exploding home video market.  The VHS release coincides with the film’s DVD release and anyone living in Austin Texas can be lucky enough to watch the film on the big screen at the Alamo Drafthouse on the very same day.

I just received the DVD in the mail and I plan to have a review up sometime within the next two days, and there is a slight chance it may just make my list of Favorite Cult Films. You’ll have to wait and see. In the meantime, here is some more info about the release.

It all started when Severin Films announced this week, an agreement with the estate of Larry Gold, Sr. to handle all future production and marketing for Intervision Picture Corporation. The arrangement commenced with the 5/10 release of 1983’s Sledgehammer. Gold, a pioneer of ‘70s film distribution and ‘80s genre VHS, died in March following a massive coronary at his home in Thailand. Severin’s Evan Husney will supervise all production and marketing for the label. Intervision product will continue to be distributed in the United States by CAV Distributing Corporation. Here is the full press release from Mondo via /film

Mondo, the collectible art boutique arm of Alamo Drafthouse Cinema, is pleased to announce a partnership with Intervision Picture Corporation to release 1983’s SLEDGEHAMMER on VHS. SLEDGEHAMMER, the first shot-on-tape slasher movie for the home video market, will be the first video release of Mondo Video, a label created to release rare genre films in a collectible VHS format. The VHS release will coincide with the film’s first release on DVD and a Terror Tuesday screening on Tuesday, May 10, 2011 at Alamo Drafthouse in Austin, TX. Mondo Video’s SLEDGEHAMMER includes the original box art and copy from the 1983 VHS release and will be available for purchase only at MondoTees.com on Wednesday, May 11, 2011. The Intervision DVD will also be available for purchase on Tuesday, May 10, 2011 at http://amzn.to/sledgehammerDVD.

Mondo creative director Justin Ishmael says, “I am downright crazy about VHS, so it gives me great pride that we get to make SLEDGEHAMMER the first release on our new Mondo Video label. There has been a major resurgence in VHS collecting the last few years after it was announced that the tapes would stop being made, so being fans ourselves, we jumped at the opportunity to actually resurrect the format and release some of our favorite movies on VHS. People thought they killed the video tape back in 2008, but like a phoenix, it is rising from the ashes! Never Forget!”

“Either by way of budget constraints, warped vision or both,” says Intervision marketing director Evan Husney, “SLEDGEHAMMER is a piece of a cinematic underbelly from a universe all its own. This is the new cult canon: Buried in obscurity and ripe for reintroduction, it delivers top-shelf bizarro derangement, gonzo action, transcendental fever dreams and beyond.”

Alamo Drafthouse’s Terror Tuesday programmer Zack Carlson, says “1940s scientists put years of study into creating the nuclear bomb, but it wasn’t until the first tests at Los Alamos that they realized its inhuman powers of absolute destruction. Four decades later, filmmaker David Prior similarly unveiled SLEDGEHAMMER, a shot-on-VHS masterstroke of anti-intellectual decimation. On that day, cinema quietly crumbled into dust. Ted Prior (star of Deadly Prey; brother of the director) leads a cast of self-loathing alcoholics who face off against a shape-shifting, dimension-crossing spectre with a penchant for blunt object trauma. By the end, brains, bowels and Budweiser will be smeared across every inch of the walls.

A rewardingly lethal collision of ‘80s slasher video-vomit, suburban legend and unintentional surrealist art, Prior’s supernaturally disabled death opera is the most visionary migraine to ever pummel its way into your skull. If you survive it, you’ll never ever forget it.” Get tickets here http://drafthouse.com/movies/terror_tuesday_sledgehammer/austin.

Among the DVD’s bonus features will be the short segment “HAMMERTIME!,” where the Alamo’s
Terror Tuesday programmer Zack Carlson talks about the unique majesty of SLEDGEHAMMER and the unstoppable, incalculable power of ’80s shot-on-video horror in general.