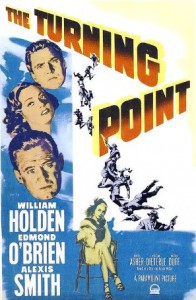 It is with much hoopla and media coverage that district attorney John Conroy (Edmond O’Brien) is tasked with bringing a decisive end to the alarming crime wave and corruption that has swept Los Angeles in recent years. One crime syndicate has been singled out, an organization so foul that a palpable fear has stricken law enforcement and the public, a fear for their very lives as well as a fear towards knowing the truth as to how its nefarious influence has seeped into the city’s fine institutions. Old friend and current hard-nosed newspaper reporter Jerry McKibbon (William Holden) has a knack for sniffing out trouble and good news stories, the two of which often go hand in hand. His presence irks John’s assistant and current main squeeze Amanda Waycross (Alexis Smith), who finds Jerry’s methods and cynical attitude annoying. Jerry’s abrasive ways do bear fruit however, sometimes in destructive ways, such when he uncovers the truth that John’s own father, police officer Matt Conroy (Tom Tully), is also in the syndicate’s pocket…

There is a salient point to be made about pictures that start off strong yet fail to maintain their initially impressive momentum. The opposite also proves true sometimes, but this second variation makes for a much more satisfying experience. Most would rather have a film require some opening sequences to get really going and then hit its stride until the finish line. A movie that accomplishes the first feat leaves much to be desired, the same of which can be said for William Dieterle’s The Turning Point, an unfortunately fitting title considering that there is indeed a very specific moment at which the film begins to stagnate, finding it very challenging to pick itself before the end credits roll.

Of the applaud-worthy qualities it has going for it is a brilliant exercise of what makes a solid noir picture, at least for a while. Most can easily list off the many visual cues that provide an indelible identity to this most conspicuous of film movements. Of its thematic texture, a recurring motif that comes across through many stories is the moral fiber of its central or peripheral characters being tested. In film noir, people are under the negative influence to either perform acts that are self-serving regardless of the consequences of said acts on others (these individuals can are said to be fully corrupted even though they may not always relish in the pain others suffer) or, rather, engage in behavior they may hope will see them through the day but incurs extremely tall risks. Both are at play in The Turning Point as viewers are introduced early on with the father and son duo of John and Matt Conroy. John, as district attorney, can see no better ally in his mission than having dear old dad by his side to help with the investigation. Little does he know that Matt is already a pawn of the crime syndicate. That said, Matt’s allegiance to the gangsters has less to do with wonky ethics and more to do with financial dependence. 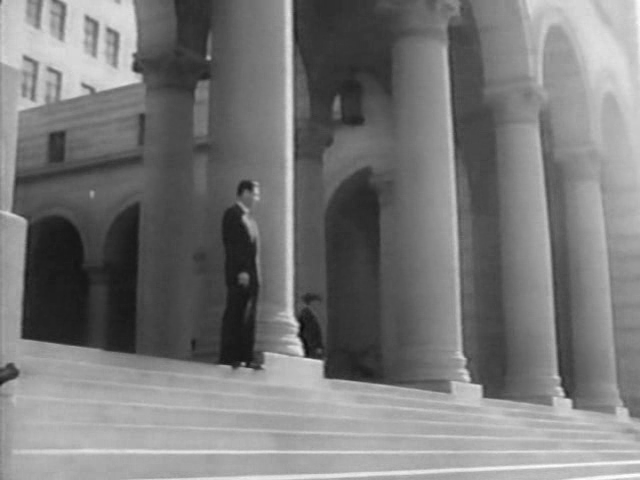 Pesky Jerry McKibbon comes to discover this unfortunate truth, putting Matt in a tight spot. All of this begs some crucial queries however: what needs to be done now to rectify the situation? Revealing the truth to John would be just as devastating on a personal level as it would on an professional one. Jerry must quell the innate need to be frank with John, even going so far as to provide tactical help to Matt in order for the latter to escape his predicament. Lies abound in this section of the picture, but rarely are these lies the product of malice or mischief. Rather, they are sad lies that must be kept up in order to prevent a delicate house of cards from tumbling down. This section of the film, which lasts right up until the halfway point, is excellently paced and provides the viewer with as much intellectual and dramatic fat to chew on as the characters caught up in this dangerous dance.

Another highlight is the tall performance from William Holden as journalist Jerry McKibbon. Holden is excellent as a seasoned reporter who knows how to follow his nose, whose experience has lent him sharp ears and eyes and a decidedly cynical view on the world. That said, he is by no means a bad guy. In fact, he very much wants to see good prevail, only experience has crafted his rather sour outlook. The actor sells his role like nobody’s business, making it easy to believe in his gumption and the unenviable pressure that mounts on him. While the film is stacked with considerable talent, among them O’Brien and Tully, Holden is the one that leaves the most lasting impact.

A lack of consistency is the bane of any movie, especially those begin as swimmingly as does The Turning Point. Major plot revelations shall be avoided, but suffice to say that there is indeed a major turning point to the story as the title suggests. Once this twist transpires, director Dieterle struggles to preserve the same level of suspense and moral ambiguity that was at the core of the picture’s opening half. Whereas the first 40 minutes or so found their footing in a molasses of skewered intentions, conducing decent people to make tough, sometimes questionable decisions. New characters are introduced in a seeming attempt to make up for those that are lost, few of which bring much of interest to the story. One in particular is brought forth remarkably late in the movie in a maneuver some would deem akin to a deus ex machina. 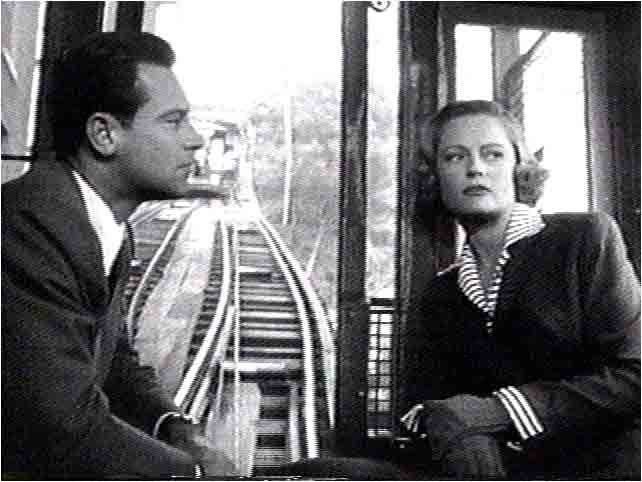 The acting is still fine during this stretch, which bodes well considering the sublimely talented cast, but the very nature of the story shifts from being about the aforementioned challenge to the moral fiber of the protagonists to a dryer procedural coupled with a love story between Jerry and Amanda that, instead of complicating matters more so between Jerry and John, takes away from what arguably should have been the film’s heart. The binding between the journalist and the assistant, at one time very much at odds with each other, feels forced, as if the filmmakers were compelled to try as much as they could and hope that most of it would stick. Arguably more perplexing is the fact The Turning Point does not even make much of how their attraction could create a schism between themselves and John, for the latter is no longer the focal point during the second half.

In the end, a lack of convincing direction is what plagues director Dieterle’s picture the most. The final product is by no means poor, but leaves a lot to be desired. Perhaps the filmmakers were compelled to develop the plot more so than anything else, assuming that that is what audiences are interested in most. The choice of not utilizing the district attorney’s quest as mere backdrop to explore thematically challenging material undoes the picture in some ways, an unfortunate byproduct of wanting to arrive at the finish for the sake of plot resolution. This Turning Point is a double edged sword. 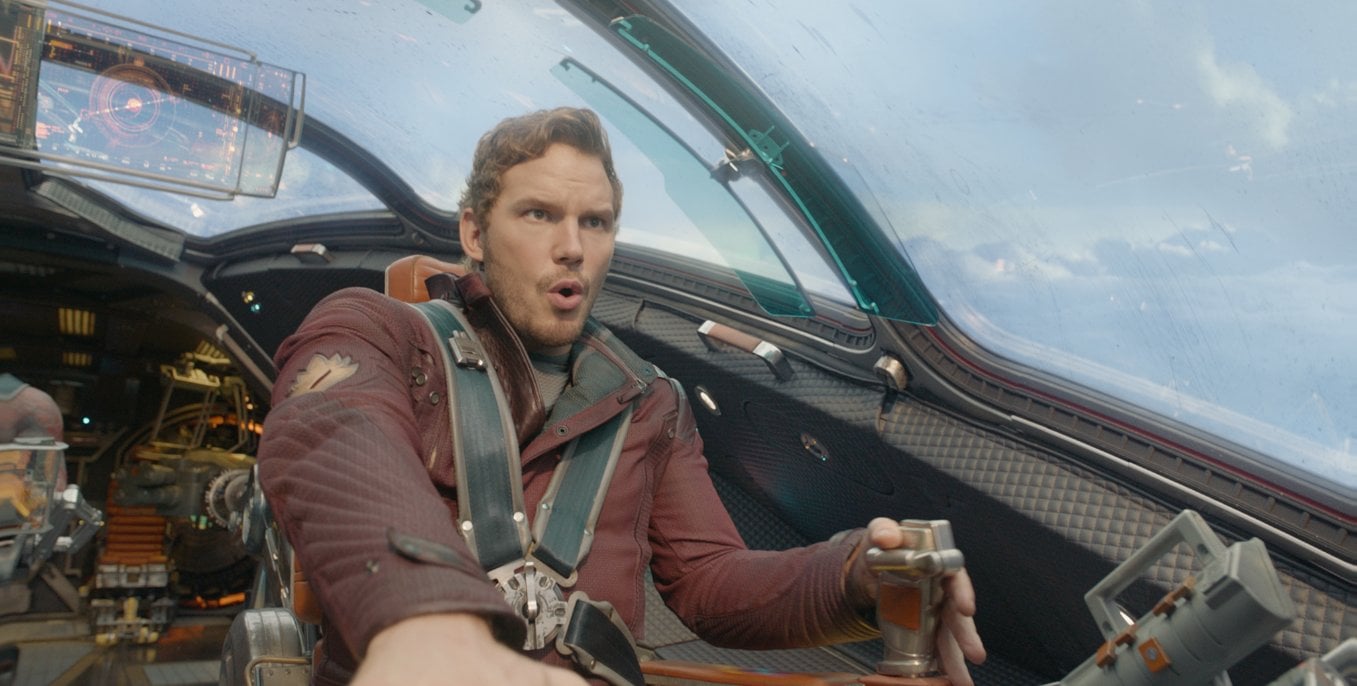 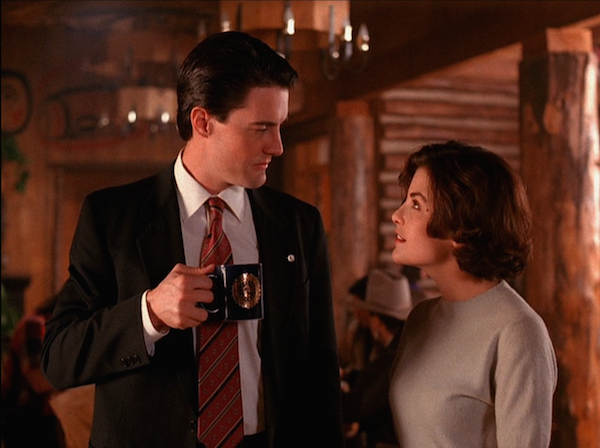