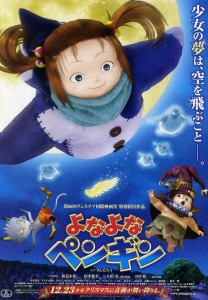 It has most likely been said and written elsewhere and done in far more articulate manner, but the Japanese have a knack for going all out within the realm of feature length animated films. Unlike in other countries and regions of the globe, which all produce fine pictures in their own right by the way, animation from the land of the rising sun seems to occur on a completely different level. Maybe much of the fuss about their cinema is tied to the reality that, more often than not, they truly create new, unexpected worlds which are only so rarely seen in animation produced in other countries. Some might argue that this storytelling technique feels more as if the Japanese abandon basic principles in storytelling, preferring to throw a bunch of stuff on screen and see what sticks. That is open to debate, but there is little doubt they their animators have imagination, Yona Yona Penguin, from experienced animation director Rintaro, being on such example.

A young girl named Coco is madly in love with penguins. She collects penguin shaped toys, penguin related posters, and even dresses up in a penguin costume as she runs around the streets of her neighbourhood at night, imitating the quacking sound of her favourite beast. Living alone with her mother after the passing of her father, Coco is picked on by her peers who mock her admittedly curious penguin adoration. All of her current troubles pale in comparison to what awaits her the night a little toy egg magically falls to her feet. Inside is a collection of pieces which, once assembled together, form a little goblin who speaks and brings Coco to a previously unknown penguin toy store in a park nearby. It is only then that her new fantastical friend, who goes by the name of Chaley (Coco actually misunderstands him at first and asks ‘You mean Charlie?’), takes her to a mystical world where a community of friendly goblins are under constant threat from a terrifying sorcerer. While Coco is glad to have a new friend in Chaley, she is more unsure about the goblins’ belief that she is the long hoped for Flightless Bird who has arrived to offer save their lives. Yona Yona Penguin‘s peculiar animation style requires a few minutes to win the viewer over. Upon initially witnessing the movie’s computer generated visual qualities, it looks egregiously cheap, as if the picture had been made in the early 90s and only recently released to the public. However, as a familiar saying goes, there is more than meets the eye to what director Rintaro and his team have created. The further the Yona zips along at its breath taking pace and leads the viewers to more detailed and elaborate environment populated by even stranger looking characters than those met at the start, the clearer the intent of the filmmakers becomes. What at first appears as shamefully primitive is in fact a very clever animation device which transports traditional, ‘anime’ animation style to the realm of computer generated storytelling. The fruit of the filmmakers’ efforts may demand a few scenes out of the audience for them to recognize what exactly they are doing, especially if one’s experience with anime is limited, but the effect is most definitely there. The roundish shapes of the heads, the very two-dimensional backgrounds, the character reaction shots, such as bulging eyes, all the visual signatures which lend traditional Japanese animation is undeniable quality are present, only vastly different tools are used in the case of Yona. It still does not make this movie look especially great given how its style remains mostly simplistic throughout, but it is better than what some might initially give it credit for in the first few minutes.

Then there is the matter of how the story evolves. It is here that Yona very much feels like in spirit with its Japanese brethren, with some of Studio Ghibli’s efforts springing to mind in particular. The story moves along very, very rapidly, never slowing down to catch its breath. That in of itself is not an issue. In fact, the movie benefits from this abundance of energy. After all, it is aimed at children, and with so many colourful, funny looking things happening on screen every minute or so, it seems unlikely that the young ones will ever give in to boredom. Nonetheless, the lack of downtime, even only briefly, means that a lot is happening to create action and have the characters move from point A to B to C, so on and so forth, so much so that it does feel, at least occasionally, like Rintaro and crew are making stuff up on the fly. More than anything, this issue concerns the antagonists right hand man, or boy, to be more accurate. At first the character is very rude, then very polite, then it turns out he came from somewhere else than the world of the goblins, then it turns out that…The readers probably get the point. Imagination is one thing, but structure to said imagination never hurt anyone either, and perhaps Yona lacks some self discipline at times so far as what the film chooses to toss into the pot. The tone of the movie is very interesting too. It is not exactly a comedy, although it does make some attempts at humour, nor is it very adult oriented (that should not be much of a surprise perhaps), yet there are scenes which feature some rather scary imagery. The chief villain of the story is quite a visually intimidating figure if there ever was one in a kids animated film. Late in the picture, when a final confrontation transpires between Coco, the goblins and the aforementioned source of evil, the latter grows exponentially in stature, emerging out of his dark and scary castle as a massive, shadowy, winged figure which will surely conjure up images of Chernabog from Fantasia‘s Night on Bald Mountain in the minds of some audience members. On the complete opposite side of the spectrum is Coco herself, who is made out to be so undeniably cute and worthy of the viewer’s adoration. Yona definitely tries to balance out the tone to a degree, even though as a whole it stands firmly in the camp of ‘kiddie film.’

Yona Yona Penguin does not strive for too much, but nor should it. It exists to have fun and offer an amusing 87 minutes to the kids who will watch it. On that level, the film succeeds. Of course, animation buffs looking for the next greatest film to emerge out of Japan will have to concern themselves with other options.