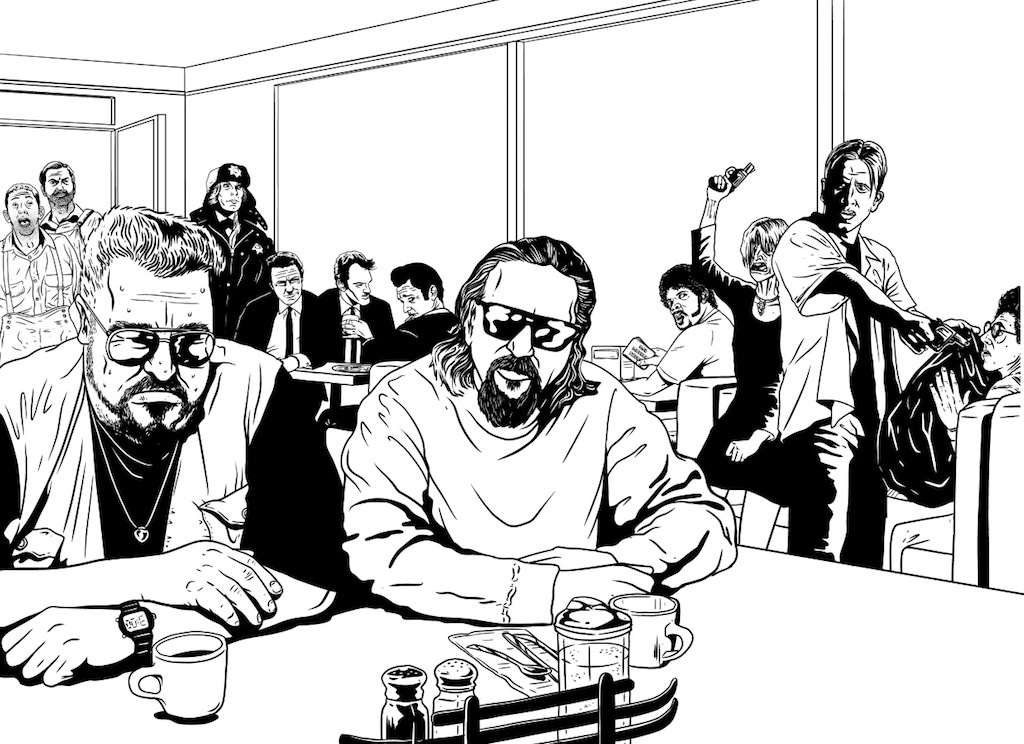 We recently posted an article (along with some images) about the upcoming Quentin vs. Coen – art show by Spoke Art. The show is you guessed it, a tribute to the films of Tarantino and the Brothers”, a followup to last year’s highly successful Bad Dads – a tribute to Wes Anderson.

Ken Harman (founder of Spoke Art) was kind to send us a ton of new images he compiled from the show that I think our readers will enjoy. I already posted the Tarantino inspired images, but here is the art work based on the Coen brother’s films. For Quentin vs. Coen, Spoke Art has arranged a battle-royal style art show featuring over 100 world class artists from the new contemporary art scene. Painters, screen printers and digital artists were invited to reinterpret their favorite scenes, characters and films from the heralded directors, resulting in an eclectic showing of inspirational fine art. The first installment of our “versus” series, Quentin vs Coen looks to expand on the concept of a pop-culture themed art show by pitting together two directors who share overlapping or similar stylistic themes, and allowing the viewer to decide their favorites. Though there are many distinct differences between the bodies of work created by both Quentin Tarantino and the Coen Brothers, their crafting of generation-defining soundtracks, the penchant for ubiquitous violence, their casting of the same actors (notably Steve Buscemi), and their ability to constantly create spectacular works of varying genres (everything from Kung-Fu to crime dramas to westerns), have cemented both Quentin and the Coens as some of the most important directors of our generation. For our upcoming show, Spoke Art has recruited an extensive network of renowned and emerging artists in a spontaneous and free for all art exhibit. No restrictions were placed on content or subject matter, allowing each artist to chose their personal favorite scenes, films and characters. With over 100 artists, Quentin vs. Coen offers a broad range of affordable prints and also fine art works. The show opens on Thursday, April 7th at Bold Hype Gallery in New York City and will be on view until Saturday, April 9th. We will be celebrating our opening night with a costume contest and complimentary “Caucasian” cocktails (White Russians). To view how much fun our opening nights can be, please view the video from last year’s Bad Dads art show listed below. What: Quentin vs. Coen – an art show tribute to Tarantino and the Brothers