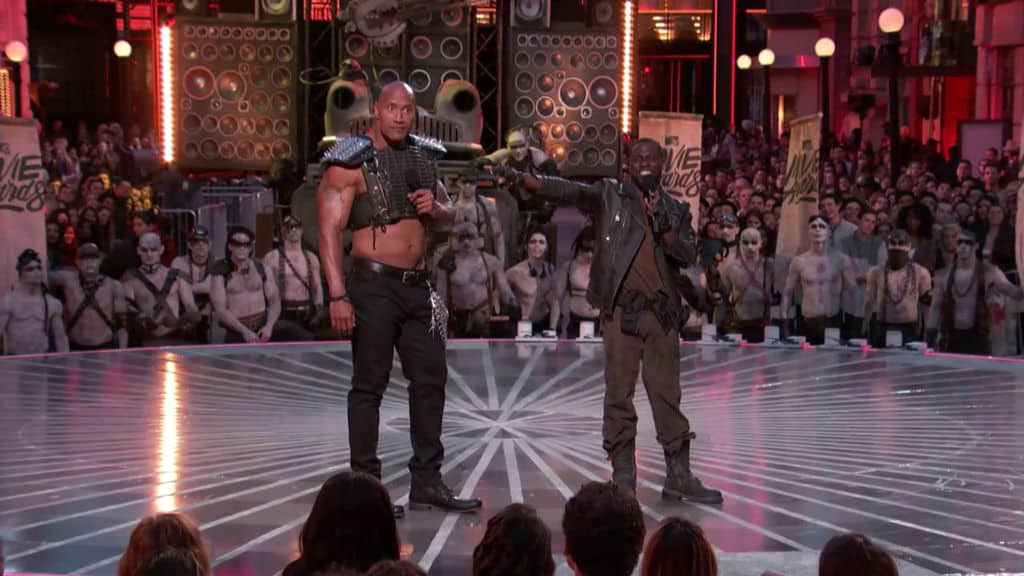 If you ask most people what the most awesome part of Mad Max: Fury Road was, they’ll say “flamethrower guitar guy”, unaware that his name is actually Coma, The Doof Warrior. Like almost every character in Fury Road, Coma actually has a fairly detailed backstory, but that’s not what we’re here to talk about. For their entrance to the MTV Movie Awards, hosts Dwayne ‘The Rock’ Johnson and Kevin Hart went all out, with Johnson riding in on a massive rig of speakers and subwoofers with a screaming Hart strapped to the hood. Of course, The Rock avoided The Doof’s red longjohns and skin mask (that’s actually Coma’s mother’s face. True story!), in favor of some slightly more dignified post-apocalypse leathers.

I’m sure the bombastic entrance took The Rock back to his days as a pro wrestler, where this kind of ultra-masculinized pagentry was basically his entire job. Also, kudos to the camera team for ensuring at least one reaction shot from Fury Road star Charlize Theron, who I assume was the only member of the film’s cast in attendance.

This wasn’t the only bit of fun the duo got up to in hosting the awards. Later on, Johnson and Hart suited up as “Samoan Superman and Dark Chocolate Knight” to call out any Marvel actors in attendance. With The Rock slated to appear as Black Adam in DC’s Shazam movie, he’s apparently still firmly on Team DC.