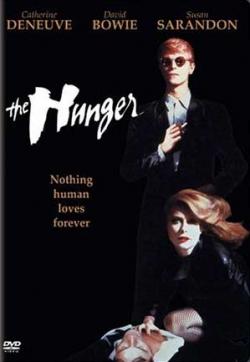 Billed as a horror film, The Hunger is anything but. What it is, however, is a credible first effort by Tony Scott (Déjà vu, Domino, Man on fire), Ridley’s younger brother. Immediately after watching I came to the conclusion that this film is one of either two things: an incredibly good 80s vampire movie or an awful one who had obtained a cult following mostly because of a soft-core lesbian scene. I fear that the answer lies somewhere in between those two extremities.

From the onset I was sucked into Scott’s gothic world, bobbing my head to Bauhaus’ “Bela Lugosi’s Dead”; the fantasy was quickly fading however and it was around the ten minute mark that my attention span waned, coinciding with the beginning of the story. Scott spends an unusually long time establishing his plot, choosing instead to bathe his viewers in lavish Gothic and Victorian-inspired visuals. Our characters too are very slowly introduced, to the point where I almost became completely despondent, but not quite – David Bowie saves the movie’s first half with a brilliant performance as John, Myriam’s (Catherine Deneuve) lover and a fellow vampire, who have been together for a couple centuries. The problem is that while Miriam is eternal, her lovers are not and John is suddenly aging at breakneck speeds. Like all of Myriam’s previous lovers, he will become extremely brittle and moments away from death (see Alec Baldwin at the end of Beetlejuice). In a last ditch attempt to find a cure for his unfortunate ‘curse’, John visits Dr. Sarah Roberts (Susan Sarandon), a talented scientist who studies the effects of progeria (premature aging) in monkeys.

Well, suffice it to say that the plot from that point on becomes tedious and stretched out way beyond its capacities. A bizarre love triangle materializes between Sarah and Miriam while John is buried away in an attic coffin, along with the other loves Miriam has had throughout the ages. The dialogue is as stale as the piece of bread that’s been lying on my kitchen counter for the past month or so. There is an almost pretentious feel to this film as well; I use the word almost because in hindsight, I believe Scott was simply successful in portraying the romantic and debonair atmosphere which envelopes the gothic subculture that is so tightly associated with vampires (especially in more recent Hollywood films where vampires are portrayed as extremely elegant, semi-aristocratic individuals).

A spry Susan Surandon certainly holds her own against an older, more refined Deneuve, and it was interesting to see them bounce emotions off each other in a few scenes. The lovemaking that takes place shortly past the halfway point of the film is a definite highlight, considering no stunt doubles took part (heck, I wouldn’t have hesitated either if I’d been given the opportunity to lick a young Susan Surandon’s chest). And finally as previously mentioned, David Bowie is perfectly cast as a young vampire with pride and conviction; his facial features and mannerisms convince us that it was a role he was born to play.

Stephen Goldblatt’s (Charlie Wilson’s war, Closer, Lethal Weapon) cinematography is one of the few other highlights in this film; his use of blue and green tints saturate the screen with a strange kind of darkness, and it gives the film a rather nightmarish feel at times. His artistic flair here certainly deserves some kind of praise and furthermore, his vision complements Scott’s rather unorthodox style of editing, one that has now become the norm. In that regard The Hunger was slightly ahead of its time. While viewers weren’t accustomed to jagged, shorter scenes in the 80s, MTV certainly used that style to its advantage as it became increasingly popular with time.

My biggest gripe is with the movie’s pacing. Coupled with a dark and ominous soundtrack, the brooding mood never lacks but there is certainly a problem when it comes to the plot…The second hour feels like a dull knife slowly making its way between your 3rd and 4th ribs.

That’s why I would recommend that anyone watching this movie heeds this advice: lose yourself in the sets, the costumes and the music rather than the plot, because it’ll be a lot more enjoyable that way. The elegance is what made this movie a cult favorite and if it weren’t for the shoddy dialogue and recycled story, I would have enjoyed this film a lot more than I did. In our day and age, we fear aging more than ever so this movie is actually more relevant now than it was 25 years ago. With that in mind I think it would be an interesting watch on a lazy Sunday afternoon, but not anything to get excited about. While The Hunger may not appeal to everyone, and trust me it certainly won’t, lovers of art house cinema, David Bowie and Bauhaus will certainly get a kick out of this.