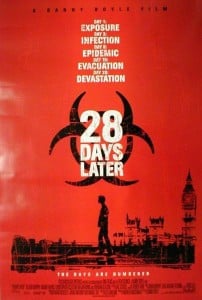 The more times I see this film, the better it gets. This may, however, be because it’s made up of three better movies, The Omega Man, Dawn of the Dead, and Day of the Dead, split up exactly along act breaks.

The horror genre, however, thrives on homage, which is a legal term meaning ‘please don’t sue me; it’s a tribute’. But bizarrely enough, in the hands of chameleon director Danny Boyle (Trainspotting, Slumdog Millionaire), the film rises above its blatant rip-offs and becomes much more than the sum of its parts. Hell, it even ripped off its title from the Sandra Bullock movie 28 Days, and it still works.

28 Days Later stars the dead-eyed Cillian Murphy and the always-affable Brendan Gleeson, who seems like the kind of fellow who’d curb-stomp a Manchester United fan to death without ever losing the smile from his Irish eyes. It tells the story of a rabies-like disease that transforms England into a post-apocalyptic wasteland. Murphy plays Jim, a bicycle courier who, in a coma after an accident, misses the onset of the plague and awakes to find most of the country dead.

The film is one of the first to make good use of digital video, with the harsh, cheap visuals coming off more as a post-digital-apocalypse look than an I-just-graduated-from-a-communications-program-at-community-college look. The hyper-kinetic editing transcends the music videos which it references, instead leaving the viewer in a hybrid state of panic and excitement, sort of like a cross between a seizure and a handjob. But before praise is heaped too heavily upon this film, I would like to point out that 28 Days Later did not invent the fast zombie, as if often claimed, any more than George A. Romero invented the slow one. While slow zombies have been around since the 30s, fast ones have existed since Return of the Living Dead and Re-Animator in 1985, if not before. That’s not to say that 28 Days Later… isn’t a great film, it’s just not an entirely original one. But that matters little. It’s still tense, perfectly acted, and horrifying. At least as far as Sandra Bullock movies go.

Portions of this review have previously appeared on The 16mm Shrine. 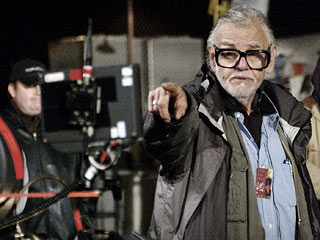