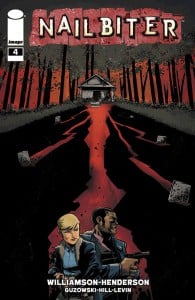 Finch and Crane go digging for answers, and what they find isn’t pretty. This is sort of an in-between issue in which we as readers learn a few answers, but so many more questions are raised that we are still sitting in limbo. Time to just kick back and enjoy the ride, because even when it’s slow, this comic is good.

We’re treated to a flashback of one of the townspeople, whose brother, a talented and precocious artist, became the WTF Killer. Raleigh encourages a group of people, apparently all relatives of killers, to find a way to “dig ourselves out of the hole they put is in.” In the present, Finch and Crane are digging when somebody opens fire on them, forcing them into a brief shootout and brawl. The man in the hood is one of the teenagers from before, who says that he did what he did to end the curse before he blows his brains out. Elsewhere, Alice breaks into the jail and offers to free Nailbiter in exchange for help with a school “project.” Finch and Crane make their way to the bottom of the grave in time for one last, gruesome surprise. 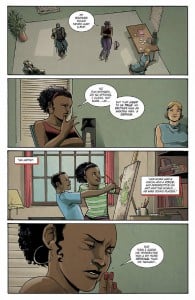 This issue wasn’t quite as gripping, in part because the unmasking isn’t a particularly dramatic reveal. To be fair, I didn’t see it coming, so I guess it was a good reveal, but I didn’t realize who it was until he had some dialogue. The revelation at the end of the comic is interesting, and it’s appropriately gruesome, but there’s nothing juicy for us to learn until next issue. Clearly Alice has some kind of endgame, and her releasing Nailbiter will stir things up, but we just have to wait-and-see how that unfolds. That pretty much describes the issue.

But while that brings it down a bit, the rest of the comic continues to shine. I love the self- 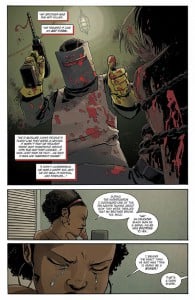 awareness of all of the characters in this comic, whether it’s Crane realizing she described a serial killer as having “only killed five people,” or Nailbiter greeting Alice with “Hello, Clarice.” It gives the feeling of reality, because everybody is sort of conscious of the ridiculous shit they’re saying and the tropes they’re being forced to endure. Furthermore, this comic book knows how to use violence without relying on it as a crutch, as all too many other books and movies do today. It knows when to show just enough but not too much.

Honestly, issues like this are where a comic book shines. When you have an issue where the action isn’t the most gripping (as it will inevitably be) or plot developments don’t have you on the edge of your seat AND you want to keep reading, you’ve found a good comic. The writing, tone and general sensibility are strong enough to keep the comic interesting even when it has to slow down for the sake of pacing. 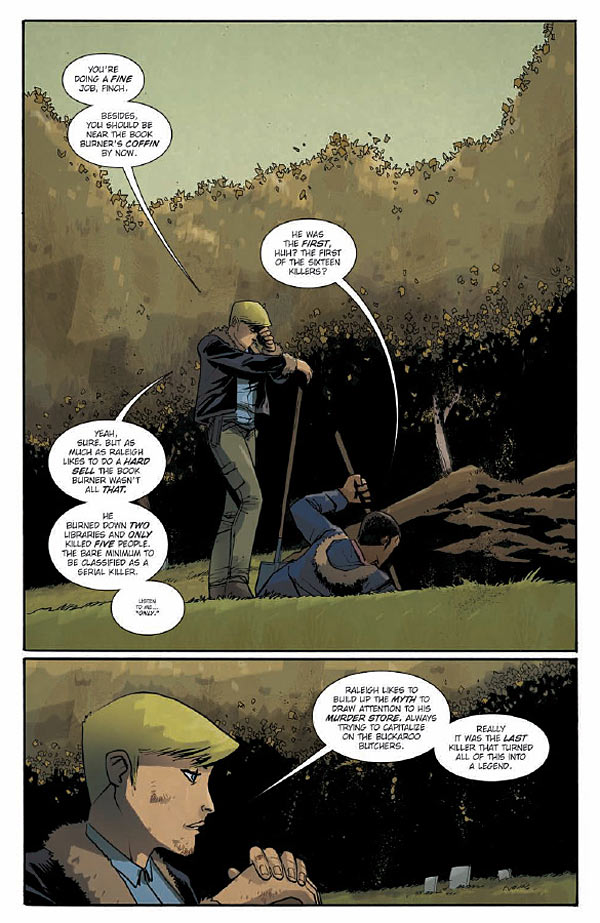 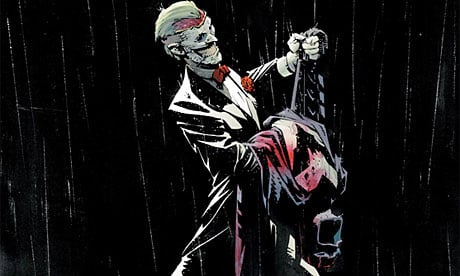 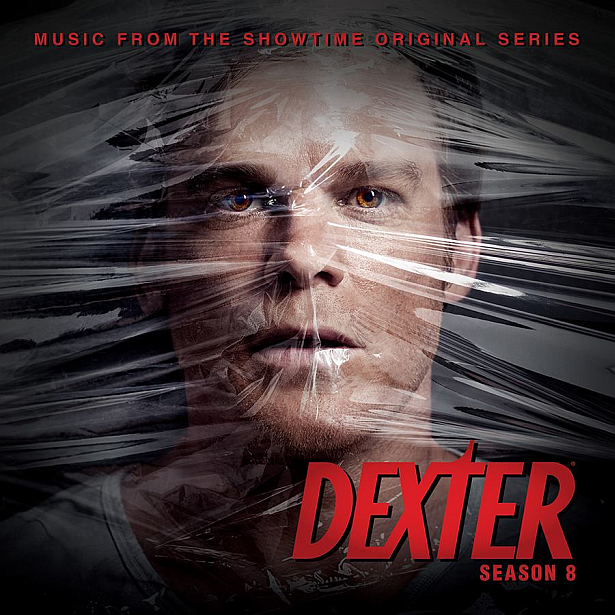