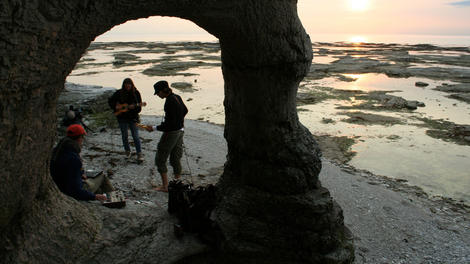 In celebration of the Parks Canada centennial this stunning collaboration of Canada’s elite in filmmaking and music combine to create a visionary glimpse into the unique terrains of Canada’s national parks. Spanning our country, the diversity of landscape is showcased through the exquisite portrayal of time and memory and by the exceptional scores produced by the equally diverse roster of Canadian musicians. The film episodes serve as an ode to the terrains that give Canada it’s identity, and celebrate how as a country we can showcase our beauty and talents, but also make evident that with change of weather and life needs to be change of action and perception.

The films, chunked into episodes for each park, encapsulate a microcosm of sound, stopping the idea of filmmaking to allow the effortless landscapes to reveal themselves and accentuate the music of nature, whether it be silence, animal calls, echoed voices or rushing water. The kaleidoscope of musical influence extends to the formation of each trio of musicians. Compiled seemingly at random, the need to create music inspired by landscape propels the film into a higher realm because it makes the project seem whole rather than a cut-and-paste of good but separate parts. A uniquely Canadian perspective of music thrives: Death from Above 1979, Sam Roberts, Woodpigeion, Great Lake Swimmers, Godspeed You! Black Emperor, and Candence Weapon are among the distinguished list of Canadian musicians and genres. Folk collides with indigenous rap collides with ambient noise collides with experimental metal––the breadth of talent limitless like the scenery it describes. Mini music videos show the artists exploration of their park and the creation of sound to compliment it’s scenery. Shad boarding a plane with the Besnard Lakes in Nahanni, Northwest Territories, flying over the cascading mountains, only landing to float down a river composing their score, or Tanya Tagaq and Apostle of Hustle sitting stoic in the icy wonderland of Sirmilik, Nunuvut weaving throat singing and electric guitar together, are among the highlights of these hidden moments.

The parks exposed in their rawness, violent yet calming, are distinct in their features, yet there is a sense of universality among the Canadian landscapes that creates this sense of home within the soul while watching.  The sense of camaraderie that can be so, Canadian, flourishes because of touches like CBC hats, outdoor humour, and rubber boots that exemplify that dichotomy of Canadian life––city versus country. The idea of playing guitars within a chipboard shed clad in plaid shirts seems quintessential Canadian and almost laughably so. But as much as this film boasts that Canadian identity, it also serves to speak of its myth, and the fragility that we, as Canadians, evoke in our landscapes and relationships with one another. Director Zacharias Kunuk projects the elusive extremes of climate and beauty through the voice of an elder, unafraid to show the fine balance of life and respect and it is within moments like these that one realises how far Canadian identity still needs to expand and grow in the understanding of nature, people and respect.

The effervescent beauty of Canadian extremes––frozen tundra, jagged mountains to electric guitars and throat singing––is miraculous and mesmerizing. The films are intense and magnificent collaborations of sight and sound while the additional vignettes cultivate character and humour.  A wonderful capsule of time for Canadian culture, it is a mark of what we can achieve when ideas and moments are allowed to foster and grow within the sliding scale of Canadian values.