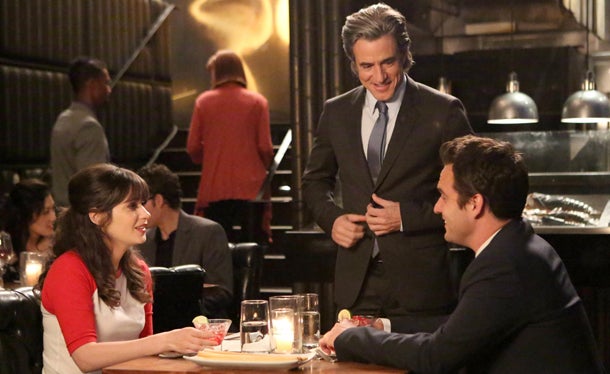 Many New Girl fans have been waiting all season to see Nick and Jess in a real date setting and this week’s episode finally gives us a first taste of that, kind of. Nick’s decision to take Jess out on a date stems from a great scene he shares with Tran, the old Asian man from “Menzies” and Nick’s personal confidant. Nick isn’t good at expressing his emotions but when we see him just talk at this old man it’s great. He addresses the issue and comes up with a plan of action. The result, however, is nowhere near as assertive as he originally plans.

Whilst this is happening Schmidt and Winston are left at the loft to their own devices without Nick. These two characters don’t get much alone time and considering how great Winston was in “Quick Hardening Caulk”, it’s strange to think that they are only friends because of Nick. It is reminiscent of the Seinfeld episode where Elaine and George struggle to hang out when Jerry isn’t there. This B story feels like nothing more than filler, particularly when they experience a misadventure with a homeless man, Outside Dave. It does raise some interesting issues Schmidt and Winston have about Nick and Jess possibly getting together though, which hopefully will be explored. Their misadventure ends with Schmidt acknowledging that they’re pretty good friends after all.

Given Jess and Nick’s track record, it was evident their First Date was going to be unconventional and awkward, but the whole thing genuinely feels weird and rigid. It is great to see scruffy Nick make such an effort, it works as good build-up and gets the audience excited, but when Jess asks if this is a date we’re just as disappointed with Nick’s response as she is. The small talk is uncomfortable and the untimely return of Russell (Dermot Mulroney) really feels unnecessary. It’s both fun and frustrating to watch them relentlessly try to prove to the only man they both loved how far from a date this is. Running into an ex on a date (or a not date) just screams sitcom, but going as far as having him comment and ask them to define their relationship in front of his date is just weird. However, it’s Nick’s dialogue (of course) that makes up for this odd situation. The way he tries to deny any feelings for Jess all while still admiring Russell’s gentlemanly ways is really entertaining to watch. His lines are incredible, “Did you valet? God that is classy!” and “You had two pens on you this whole time? That’s the move right there!”. The date isn’t an entire disaster though; the pair decide to stop the dinner and drink instead which provides us with a great scene where they discuss each other’s sexy habits.

For every strength about this episode there is a weakness. It is great to see them finally do something other than try fighting their sexual urges but it’s also annoying because we, the audience, do not gain any closure on where Nick and Jess stand, relationship-wise. Even after their date, the duo’s status is left open, although they are closer to couple territory than ever before. Overall this episode isn’t bad- it’s funny in places but just frustrating because still nothing has really happened between Nick and Jess. This is merely the structure of a sitcom though, and exactly why we continue to watch.

–       There is good continuity in this episode with Winston’s ridiculous responses and inability to properly judge pranks
–       It’s nice to see Schmidt and Winston’s friendship blossoming
–       The recurring jaywalking gag is amusing, especially when the bike fell over (I’d like to think that wasn’t scripted)
–       The flashbacks, something I always praise the show for, are pretty weak in this episode