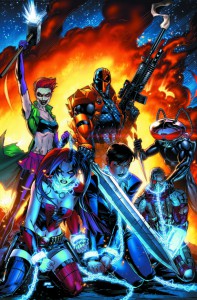 The lineup up for the New Suicide Squad assembled by Mr. (Vic?) Sage is quite the Murderer’s Row. There’s Task Force X veterans Deadshot, Harley Quinn, and Black Manta back for another go as well as newcomer (and another Joker groupie) Joker’s Daughter and new team leader Deathstroke, whose costume is colored in a particularly striking way by Blond. The first few pages of New Suicide Squad #1 show this team in action in big wide screen panels with shattered glass, bullets, and explosions. Unfortunately, this ends up being the whole comic with Sage and Amanda Waller providing color commentary over the mayhem. Artist Jeremy Roberts shows some flashes of nice artwork, like Deathstroke and Deadshot squaring off before the big mission and any scene with Joker Daughter’s ruthlessly killing her opponents in a way that would make her “daddy” proud. However, he has his share of awkward moments, like using the same explosion sequence three or four times in the comics (with the same coloring from Blond) as well as giving his characters the exact same facial expression at times. New Suicide Squad #1 had mediocre art, a one-note plot in which complex, crazy villains become action figures, and some sheer cheesy stupidity that wouldn’t be out of place in a Cold War era action film. At its best, New Suicide Squad #1 is The Expendables with supervillains. At its worst, it’s Red Dawn with supervillains.

Towards the beginning of New Suicide Squad #1, writer Sean Ryan gives a clumsy thesis statement for his vision on the book saying the Suicide Squad should be “the best group of bad people ever put together.” This is in keeping with his character, who makes Amanda Waller look responsible, level-headed, and have the moral compass of Superman. He also has control over some of the most evil badasses on the planet and sends them off to Russia to deal with a generic “top secret project”. This could be interesting if Ryan used a straightforward initial mission to give readers insights into the characters that make up the Suicide Squad or even show some of their internal squabbles. He does this in one scene in which Roberts indulges in a cliched little Harley Quinn/Joker’s Daughter cat-fight and better, shows why Deathstroke is in charge. But after this, the characters just become violence delivery devices against faceless goons because of some vague mission. Some of Sage and Waller interactions are clever, and hopefully some of Sage’s wild ideas like recruiting the Joker will come to fruition or at least have some effect on the plot. But for the most part, New Suicide Squad #1 is a not so potent mixture of cheesy dialogue, generic action, and plot that exists for no reason with a last page reveal that is laughingly bad.

On paper, New Suicide Squad #1 despite being written and drawn by creators who have no experience doing an ongoing comics series, should have at least been a fun “popcorn” read, especially with a lineup that could give some iterations of the Justice League a hard time. However, barring a nice opening sequence of splash pages, some character sparring scenes, and some panels of the Joker’s Daughter going berserk and Deathstroke putting his plan into motion, the action was very by the numbers. Most team members had a showcase moment or two, but Harley Quinn (the only Squaddie to have her own solo series) seemed out of place in a stealth mission and didn’t even have anything interesting or funny to say except for a standard line about her loving the Joker. Ryan seemed too worried with setting up the concept of the Suicide Squad (which he does a decent job of in the first few pages) to give them anything interesting to say or do. New Suicide Squad #1 has one of the most intriguing superteam lineups in a while, but Ryan and Roberts mishandle them.