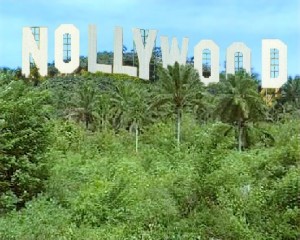 If the progression from American soaps to Hispanic telenovelas can be charted as the line from restrained melodrama to fullblown camp, then the movies made by Nigeria’s burgeoning film industry, colloquially (and often proudly) refered to as Nollywood, surely represents a stylistic nadir—at least at first sight. It seems rather unfair to compare soap operas to movies, but in terms of general depth, the comparisons are wholly appropriate.

It wasn’t long ago that Nollywood passed Hollywood in becoming the world’s second largest film producer, edged only by India’s Bollywood. A reason for that is Nigerian producers’ use of cost-saving video instead of film. They make movies largely for a home audience, selling them on CDs that go for under two dollars in markets and stalls and any other informal setting you can think of. Those movies sell like hotcakes. It just so happens that they’re also extremely popular not only within Nigeria, but also throughout English-speaking West Africa.

Nollywood filmmaking is defective in several ways, at times annoyingly so. The acting (and at times I’m even tempted to call it mere grimacing) is purposefully loud and obvious, and at times embarrassingly amateurish. Even the careful, subtle moments are played to death—witness the fierce gazes past the camera, meant to convey deep emotional distress, and the tortured body movements. Nollywood actors by and large pilfer from the entire emotive catalogue.

The already rocambolesque storylines aren’t helped by the use of obscenely frequent close-ups, distracting jump cuts, laughable use of zooming, and, when it comes to the epic voodoo films, tackily outdated smoke-and-mirror special effects. These straight-to-video productions are miles away from being big-budget fare. In fact, Nollywood producers typically spend around just $15, 000 to make a movie, shooting in broad daylight (when possible) and under seriously DIY conditions. Compare that to the $30 000-80 000 price range for single episodes made in Latin America, and consider the fact that Nollywood films, though endlessly derivative within their genres and often serialized, are just that—films—made for less than the wardrobe budget of a midlist Hollywood popcorn flick. 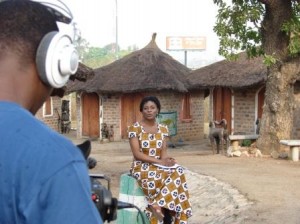 This is not to say that Nollywood films are as bad as home video. It wouldn’t be fair to denigrate them solely on that basis. To be sure, they are B-movies—but more importantly, they are Nigerian B-movies, and to a lesser extant, African ones as well. Movie theaters in Nigeria, just like in the rest of the world, are dominated by American selections. I’m loath to generalize, but Nollywood movies appeal so much because they explore (in their own gritty, sloppy way) the state of modern-day Africans: of both individuals and communities, some wallowing in poverty, some luxuriating (mostly politicians), and all of them standing at a crossroads between their ethnic cultures’ traditions and the bewildering influx of Western taste. This potluck has given rise to “voodoo” movies, (arguably the funniest ones, even when serious) which treat the subject of witchcraft with equal measures of paranoïa and frankness. There are romances, most of which are moody, heavily-scented affairs. There are also biopics of small and bigtime “419” advance payment scamers. Everything in which modern Africa partakes is being covered by the antlike industry of Nigerian filmmakers.

Most Western viewers are accustomed to seeing African cinema (if at all) through the lens of celebrated festival-circuit filmmakers like Mahamat-Saleh Haroun, Souleymane Cissé, or the late, great Ousmane Sembene, whose films combine African storytelling with sophisticated direction. Nollywood will likely fail to tickle the majority of those palates. But for those who are willing to overlook its failings, an entertaining journey into the distinctive psyche of today’s Africa looms.