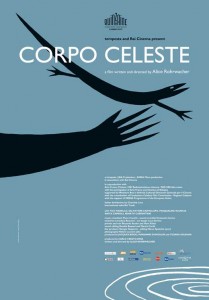 Corpo Celeste acts as a guide for the uninitiated into the oppressive realm of religious fundamentalism and traditional thinking.  The lens under which viewers examine this heady subject matter belongs to a budding adolescent named Marta (played with precocious dignity by newcomer Yile Vianello). Marta has spent most of her formative years growing up in Switzerland, but at the outset of the movie she and her mother have recently returned to Calabria, Italy, the village of Marta’s birth. Her initiation into what feels like a completely alien society comes with catechism classes, since life in Calabria revolves entirely around the Catholic faith. Marta is only marginally acquainted with Catholicism, but she must suffer through confirmation if she hopes to gain acceptance or if she ever wants to get married.

Debut filmmaker Alice Rohrwacher achieves no small task in bestowing a very personal and subtle coming-of-age story with broad impications significant to people of all ages, countries, and creeds. Corpo Celeste presents a girl burdened by a universal yearning to belong and a completely relatable desire to control her own unwieldy destiny. From the very first moment Marta’s broody face enters the frame she becomes an instant emblem of the sympathetic protagonist. Without much effort, especially given the taciturn nature of her character, Marta captures the hearts and minds of everyone watching.

Forced to go to catechism class by her well-meaning family, bullied by an overbearing sister, and manipulated by a fiercely devout teacher (portrayed impressively by Pasqualina Scuncia), Marta’s rebellious ways extend beyond religion to any domineering force that threatens to rob her of choices. In one of the most enlightening scenes of the film, Marta experiences her first period just before embarking on a meaningful spiritual journey. It appears even her body has become one less thing she can completely control.  But Marta does not complain. She doesn’t fight back by kicking and screaming.  Hers is a quiet resistance. Marta’s reticence could signify the director’s preference for signs and visual clues over spoken didacticism.  Given a subject as rich with icons as Catholicism makes this film ripe for imagery, and in that respect, it doesn’t disappoint.  Some of the treasures on display include a drowning crucifix, a dirty confirmation dress, a train of blindfolded children, and a solitary walk down a heavily littered highway. The implications and interpretations seem infinite.  These allegorical moments abound in the film and will surely delight many discerning filmgoers.

The storytelling occasionally feels uneven, mostly when it digresses from Marta’s point of view and attempts to arrive at some ancillary point by way of a supporting character. Despite very competent and believable performances, no other person in the film comes close to the thematic resonance Marta conveys.  Don Mario (Salvatore Cantalupo), the parish priest, represents the self-involvement plaguing many modern religious officials. His hypocrisy provides the perfect foil to Marta’s innocence, but he never transcends that simple function.

The film takes an unquestionably skeptical approach to its themes, but to the writer/director’s credit, its skepticism never gives way to hard-boiled cynicism. It is provocative without being condescending. Rohrwaher wisely avoids exaggeration and instead creates an environment populated with realistically flawed people, not the grotesque caricatures one might expect. She does not offer up a prophet to contradict religious concepts. Instead, she gives her narrative an inquisitive little girl who doesn’t reach any conclusions but somehow finds her own kind of peace. Corpo Celeste is a beautifully rendered exploration of ideas that translates into a wonderful cinematic experience.