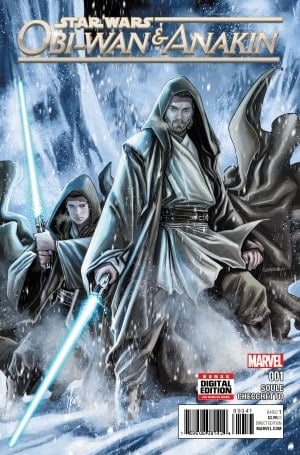 In the tradition of each and every Star Wars film, Obi Wan and Anakin #1 opens with a ship in flight above a planet. Artist Marco Checchetto of Star Wars: Shattered Empire and Punisher paints a turbulent, yet beautiful picture of a cloudy planet dotted in space debris that resembles the matte paintings used in the original Star Wars trilogy before CGI became George Lucas’ bread and butter. He excels at crafting gorgeous planetscapes, including airships and fog wreaths, with colorist Andres Mossa giving his art a green glow that is in between life and death. He also captures the intensity and ballet-like nature of lightsaber combat as Anakin tries to reenact Obi Wan’s famous duel against Darth Maul

But things get a little awkward when Checchetto draws people, especially Anakin Skywalker, who goes from looking like twelve to his early twenties depending on the page. He can fluctuate from looking like an bishonen cutie to actually like Hayden Christensen for no reason at all This also hinders writer Charles Soule’s plot as he introduced a bombshell of Anakin leaving the Jedi order during his and Obi Wan’s rescue mission, flashes back to Anakin attacking two fellow padawans, who call him “slave”. This attack shows Anakin’s rage and insecurities about his past, but nowhere does he mention wanting to leave the Jedi order or stay away from lightsabers as he flinches when Obi Wan 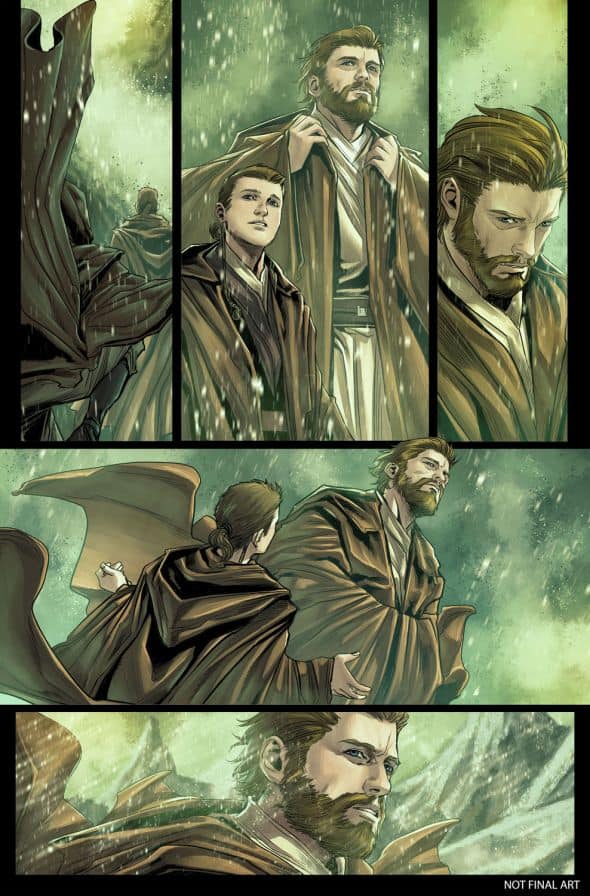 throws him one in the present day. Most of the interesting developments also happen in the past as Chancellor Palpatine admires Anakin’s skill and ferocity and talks to Mace Windu about wanting to take a more active role in Anakin’s training because the Jedi Order operates at the behest of the Senate. It’s an early foreshadowing of his desire to turn Anakin to the Dark Side, and more importantly to this story, is proof of the corruption of the Republic, who left the planet Carnelion IV to fight among themselves and basically die as a world.

See also  From the Bayou to London: A Conversation with Artist John Totleben.

Early in Obi Wan and Anakin #1 as the padawan and master explore this new, uncharted planet, Soule pens a great character establishing conversation where Obi Wan Kenobi basically sets up himself as the model Jedi. Unlike their role in the upcoming Clone Wars, Obi Wan sees the Jedi as Red Cross or UN aid workers, who happen to have martial arts and advanced weapon skills. He wants to help as many people as he can, but is a non-interventionist when it comes to foreign policy and concedes to the authority of the Republic. On the other hand, Anakin wants to use his Jedi powers without the impediments of bureaucracy. His way of speaking is blunter than Obi Wan’s, and there is a brief glimpse of a man, who would slaughter innocent Sand People to get over his mother’s death or even train with a Sith lord to prevent his wife from dying. The Jake Lloyd meets manga meets Hayden Christensen appearance of Anakin can be a little distracting, but Soule writes intelligent dialogue for all the major players in this issue which makes the political intrigue/debates much more palatable than the Prequel Trilogy.

But all the cool politics and tension between Anakin’s emotions and Jedi training gets pushed to the side at the end of Obi Wan and Anakin #1, which is pretty predictable as they discover some survivors on the planet. They have no idea who the Jedi are, and the mystery begins. This is necessary setup, but beyond the magnificent airships crashing around (Star Wars was due a steampunk planet.), there isn’t much about the people of Carnelion IV that is interesting off the bat. However, with the backstory of a civil war and neglect from both the Jedi and Republic, Obi Wan and Anakin’s mission on this planet could be an interesting look at the cracks in these revered institutions at the height of their supposed powers.

Obi Wan and Anakin #1 boasts some beautiful setting work and planetary designs from Marco Checchetto although his faces are inconsistent, especially with Anakin and another padawan, who looks like a more cartoonish version of Mace Windu. Charles Soule gives his lead character distinct voices and a tense kind of camaraderie as they leap and explore this supposed abandoned planet. However, his plot runs out of steam in the last third of the book, which seems like the first few minutes of an away mission in Star Trek. So despite its interesting conversations about ethics and politics, Obi Wan and Anakin #1 ends being a bit of a mixed bag as far as plot and art and definitely has room for improvement.