“Hat Trick” is a bittersweet episode. On the surface, this week brings us a well-crafted adventure story and, for a casual fan, another entertaining entry in the show’s canon. Upon further inspection, the episode is just another routine origin story wrapped in a shiny package. Either way, it still proves to be a fun hour. 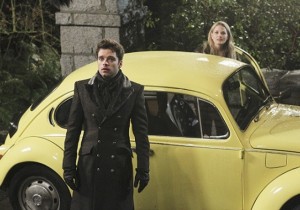 In Storybrooke, Emma discovers Mary Margaret’s fugitive status and sets out to find her to bring her in for the arraignment. While searching, Emma comes across a man on the side of the road who proves to be an episode’s worth of trouble. He is the Hatter from the Lewis Carrol Wonderland books. In the Echanted Forest, the Hatter (known as Jefferson) struggles to take care of his daughter. In an opportunity to improve life for himself and his daughter, he agrees to take the Evil Queen to Wonderland. Unfortunately for him, the Queen has ulterior motives.

There are several noteworthy features to “Hat Trick.” Foremost is Sebastian Stan as Jefferson and the Mad Hatter. Stan meshes well with the cast, even though he only interacts with a few of the series’ regulars. He gives a grounded performance so consistent with the tone of the rest of the characters that it feels like he’s been present since the premier. Considering his newcomer status this late in the season, Stan impressively manages to evoke audience sympathy for a character that appears quickly and unexpectedly.

As for the character himself, the Mad Hatter appears the sanest of all the Storybrooke characters given his cognizance of the Enchanted Forest. This isn’t new. Regina and Gold share this trait, yet their awareness didn’t stretch the imagination considering they’re the most powerful of all the characters. Jefferson, however, has no powers. He is just another trapped citizen in Storybrooke, so his understanding of both worlds is unexplainable and therefore, very intriguing. 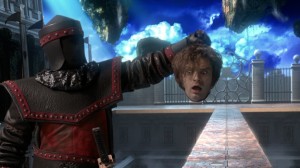 Though intriguing, Jefferson is not a necessary character. The timing of his introduction comes too late this season to make him significant to the season arc. With the large ensemble already present in the show’s two worlds, it’s confusing why we have to start with a new character from scratch. Even with Grumpy’s episode, we were somewhat familiar with him in advance.

Ultimately, “Hat Trick” feels like a trick to stall the show and buy more time before the season finale. It barely moves the bigger plot forward and fails to bring about any new revelations. Even when Jefferson validates Henry’s ramblings 100%, Emma still doesn’t even consider the possibility that these people may be living under a curse. At the end of the episode, she comes around a bit when she asks Henry to keep his book. Still, like the episode itself, it’s too little too late. It’s a shame too, because the Mad Hatter’s origin is actually pretty good, but even the idea of the origin itself is growing tiresome.

“Like everyone else here, my love has been ripped from me.” Jefferson confesses this to Emma in a line that could serve as the emotional core of every character. Every origin story this season has been entertaining and mostly unique. Yet, experiencing these origins is stale. When getting to know a new character, there may be some twists and turns, but the story beats stay the same. This leaves the audience with the same emotional experience week after week. The character development closely adheres to a strict three-act structure wherein we meet the character in the past, we see the character’s heart break, and we see the character either jaded or crippled in the present. No surprises. 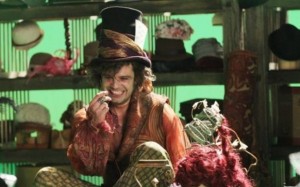 Grumpy’s story suffered from this formula and the Mad Hatter barely makes it work. The lack of innovation may be forgivable if these episodes are a means to an end of understanding these characters in the future. Right now, though, their structure just feels old.

On an unrelated note, the computer graphics in Wonderland are incredibly awful. They look like 1980’s Pixar animation. The graphics were never the best part of this show. It’s a technical limitation that shouldn’t count for the episode’s integrity, but they completely take the viewer out of the moment. The effects of the maze walls do make up some for the rest of the simple graphic design. The walls devour any one who touches them, which is one of the neatest visuals this season and is fun to see every time it happens.

How did you feel about the computer graphics or the rest of the episode? Leave your comments and predictions below.