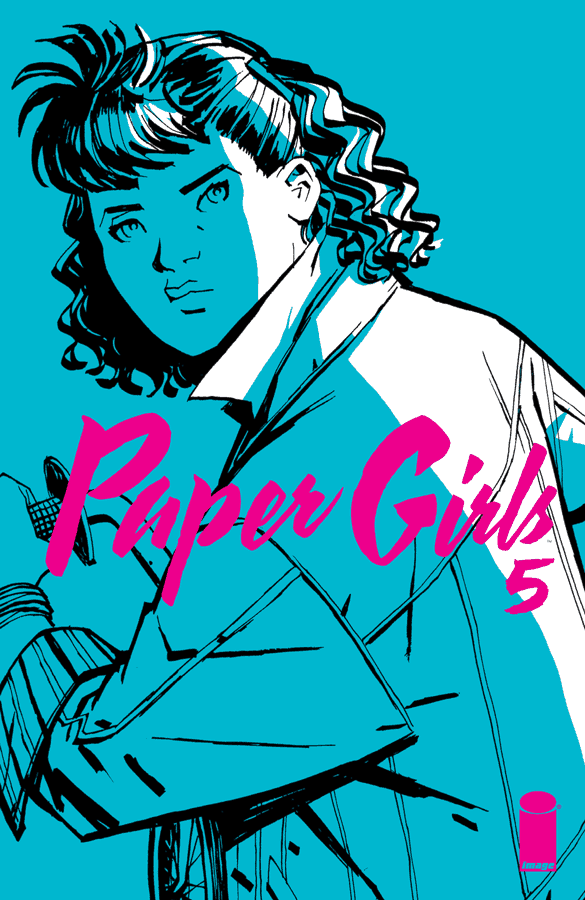 Paper Girls ends its first arc offering a few answers: Who are Heck and Naldo? Where are the missing people of Stony Stream? What is Erin’s fate? How will the girls escape Cardinal and Grand Father’s cleansing?  But it also poses even more questions as it jumps to two new eras of time. Vaughan gives satisfaction in the answers but also a tantalizing peek of what comes next. I cheered. This is a winning arc conclusion to an outstanding new series.

As the issues often do, the opening page is in Erin’s perspective. She regains consciousness, and we get a point-of-view frame of her seeing Heck and Naldo in what Heck calls their whenhouse, the place where they store their stolen tech from various eras. The place looks like it’s powered or maintained by a gigantic Apple server, linking first to the Nano Erin found in issue #1 and then back to Erin’s first dream of the astronaut and the apple. Naldo tells her she’s become an astronaut as well as a time traveler since location cannot be divorced from time lest a person ends up floating in space (or molecularly combined with someone else). At the close of issue #5, the astronaut-apple business returns one last time to give circular closure to the arc. Heck explains that they’re scavengers (time bandits, if you will), boosting tech to make a living. Sadly, when they return Erin to 1988, using one of the papers she was delivering that morning to guide them, an attack by the Old-Timers requires them to make a last minute shift in their trajectory, resulting in Naldo and Heck fatally fused together, though Erin is unharmed.

See also  Inside Out 2012: ‘Facing Mirrors’ solidifies Iran as a cinematic powerhouse

Kurt Vonnegut’s Slaughterhouse-Five posits that in a universe where time travel is possible, death is only one state of being on a person’s timeline. It doesn’t have the finality that creates feelings of loss and trauma. If Erin can exist outside the Cronenbergian Tardis (now revealed to be a Tuplequad) and inside it simultaneously, as we later find out she can, I’d like to consider poor Heck and Naldo alive somewhere in a different when–it’s easier than saying good-bye. It also means they could possibly return to the narrative. Erin is touched by their sacrifice to save her. She wants to know why, but Heck only offers that he sees his crew and her crew of paper girls as like-folk. And you always take care of your crew.

While Erin is returning to 1988, Mac, Tiff, and KJ face Cardinal and her pterosaur. This is where Tiff gets her victory. Although KJ offers surrender, Tiff’s experience with the Editrix has left her motivated to act rather than treat life like Arkanoid. She pulls the gun and threatens to shoot the dino. Cardinal apparently has strong feelings for her mount, so she backs off. Mac grabs the staff, and, as Mac does, accidentally fires the thing, sending Cardinal flying into a tree and knocking her out. Now it’s KJ’s turn to be the hero. She has an epiphany about the time travel that maybe the thing they found in the basement was the ship that Heck took Erin in. They run to the basement to be rewarded by Erin exiting the Tuplequad. Now it’s Mac’s turn. When Erin tells them that Heck and Naldo are dead, Mac shows genuine sorrow and remorse for the fact that their deaths are her fault. Now all three have gotten a measure of closure on their conflicts from the arc.

Cardinal takes responsibility for losing the girls, but Grand Father, now wearing an Apple Records t-shirt, wants to handle their punishment himself. He, like Heck and Naldo, has a storage space, only rather than tech, he’s storing the bodies of the people who all disappeared–the teenagers from the football field, the kid in the werewolf mask, presumably Erin’s family, and everyone else from Stony Stream 1988. So the antagonism between the Old-Timers and the teens is cemented by these parallel aspects: the Apple icons and the harvesting of the past. Grand Father’s icon is from the Beatles record label, which had a lengthy court battle over the iconography of the apple as used by Apple Computers. The Beatles mark an older generation, the Baby Boomers, while Apple Computers marks Generation X and beyond. What Grand Father is doing with the bodies is anyone’s guess. Interestingly, a dream Erin has while the bugs (beetles?) are knitting her back together recalls a memory of her father crying over John Lennon’s assassination in 1980. Only a small child at the time, she’s confused to see an adult so vulnerable. He responds that all adults are terrified–though because this is a dream, his face is melting like at the end of Raiders of the Lost Ark. With the Lennon-Apple Records connection, I can’t help but wonder if Grand Father is also terrified of something.

Inside the house basement, Erin warns the other girls the Tuplequad has a leak and they have to leave. Grand Father and Cardinal are waiting outside the house, and Grand Father attempts to call the girls out. He claims that Heck and co. imagine themselves as Robin Hoods, gentlemen thieves robbing out of nobility. Considering the moral cleansing language the Old-Timers use, I suspect Grand Father seems himself in a similar light–robbing with so-called moral aims. The time traveling teens may be simply following the Old-Timers around, picking up the junk left behind after an era has been “cleansed.” Erin mutters about the Tree of Knowledge (of Good and Evil) and understands Grand Father is lying. Her insight is, once again, all about the apple. There: rock. And there: hard place. Erin says, “It’s over,” the exact phrasing calling to mind end screens of video games. She holds the Apple Nano in her hands as the Tuplequad explodes, resulting in the girls being sent forward in time. KJ lands in a body of water–the stream of Stony Stream?–while the other three land together in the middle of the road.

See also  Armageddons On A “B” Budget 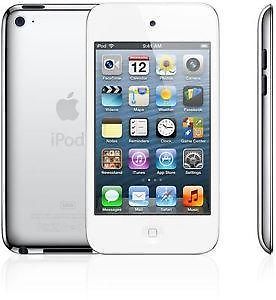 A car is coming. Erin flags it down and introduces herself, asking for help. The driver is amazed and confused. She drives a Smart Car and has one ear bud in connected to a 4th generation iPod in her pocket. It is 2010 (the year the Nano originates from as well as the iPod). The driver is future Erin!

Once again, I tell you, I cheered. I cannot wait to see if our girls become time travelers in a deliberate way. Naldo’s use of the newspaper to guide the time jump has me thinking the title Paper Girls could develop multiple meanings. I can’t wait to see what future Erin reveals and how Vaughan will handle the classic time travel paradox.

Kudos to Cliff Chiang for attending to detail so authentically that I can determine exact generations of Apple tech or models of car. The ability to read the clues in the illustrations is crucial to both understanding and enjoyment. A large part of my satisfaction at the end of the arc was due to having accurately predicted key twists.

At end of arc, we have: nostalgia is death, death is forever, forever is now, now is gone. If Grand Father’s crew and Heck’s crew have both been harvesting the past, their nostalgia is gone, sacrificed for future ends. Transitive property employed.

If you’d like to see a translation of the “alien” language, check out The Dinglehopper.

I added two tracks to the Paper Girls playlist for this issue: “Grow Old With Me” by John Lennon and “Across the Universe” by The Beatles.