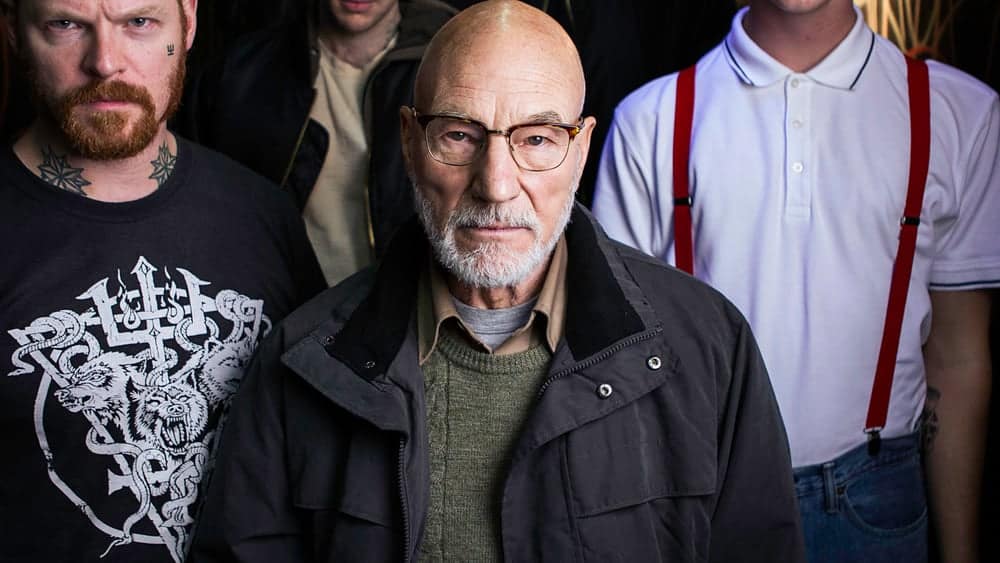 The prospect of Patrick Stewart playing a badguy kind of makes you balk when you first hear it. Stewpat? Professor X? CAPTAIN PICARD? A baddie? Nope, can’t see it. But if reviews of Jeremy Saulnier’s Green Room are to be believed, Stewart is frighteningly good in the role of the patriarch of a clan of white-supremacist hillbillies. I know, I still can’t see it either. But hopefully after I finally see Green Room I’ll have changed my tune.

A new featurette in anticipation of Green Room‘s imminent wide release hit the web a few days ago, and it focuses on Sir Patrick’s experience in first reading the script, which in his own words “scared the sh!t” out of him. Given what I’ve been hearing about Green Room, I believe it. Saulnier’s previous film, Blue Ruin, was an intense and spellbinding revenge epic, and if Saulnier’s ratcheted up the tension and atmosphere for his chromatic follow-up, that sounds like a pretty intense experience. Add in a surprising turn by a beloved actor dipping his toes into a very, very different kind of role, and Green Room looks to have the potential to be one of the films of the year.

For those not in the know, here’s the official synopsis for Green Room

Down on their luck punk rockers The Ain’t Rights are finishing up a long and unsuccessful tour, and are about to call it quits when they get an unexpected booking at an isolated, run-down club deep in the backwoods of Oregon.  What seems merely to be a third-rate gig escalates into something much more sinister when they witness an act of violence backstage that they weren’t meant to see.  Now trapped backstage, they must face off against the club’s depraved owner, Darcy Banker (Stewart), a man who will do anything to protect the secrets of his nefarious enterprise.  But while Darcy and his henchmen think the band will be easy to get rid of, The Ain’t Rights prove themselves much more cunning and capable than anyone expected, turning the tables on their unsuspecting captors and setting the stage for the ultimate life-or-death showdown.

Check out the new featurette below. Are you looking forward to Green Room? Let us know in the comments down below.