Once upon a time, shmups (AKA shoot ’em ups) were so prolific they caused currency shortages. Such is the power of video games! Space Invaders started the mania back in 1978, revolutionizing the shoot ’em up genre and becoming a national obsession for the Japanese before charming US audiences. With its success, others naturally followed: Gradius (1985), R-Type (1987), DoDonPachi (1997) and Ikaruga (2001) continued to define the anatomy of shmup games, while more recent titles like Jamestown (2011) and Dimension Drive began to approach gameplay from new, largely unexplored angles. For Jamestown, the atypical combination of British colonisation and orchestral music turned out to be a winning formula, and Dimension Drive’s unique dual screen mechanic looks set to do similar things. It seems interesting then that Japanese doujin developers HEY have chosen to go back to the classics with frantic fast-paced shooter Mecha Ritz: Steel Rondo.

Described as a ‘classic arcade shoot ’em up’ that resembles an ‘undiscovered Sega Saturn gem’, the appeal of a game like Mecha Ritz: Steel Rondo clearly lies within our own nostalgia. If the name sounds familiar, that’s because Mecha Ritz: Steel Rondo is an enhanced version of Mecha Ritz, the original Japanese version which was released via physical copies. Mecha Ritz: Steel Rondo also comes with new illustrations, an improved interface, and upgraded graphical and musical assets. Publisher Hanaji Games have praised HEY’s enthusiasm for the shmup era, which is evident in Mecha Ritz: Steel Rondo‘s vertically scrolling gameplay alongside newer design features, such as a dynamic rank system. The rank system automatically tailors the difficulty level to suit the needs of beginners as well as shooting veterans looking for a challenge, and the combat itself promises to create a deeply satisfying experience with 15 handcrafted stages and 40 bosses to overthrow. But before the bullets, there’s always a story.

When the young (and world renowned) scientist Veloce invents the ‘Mecha’, her creation ends up completely eradicating mankind and transforming the Earth into a giant, metallic wonderland. Fantastic news for the Mechas, not so fantastic for homo sapiens. One last hope exists in the form of a Mecha imbued with human will, which players 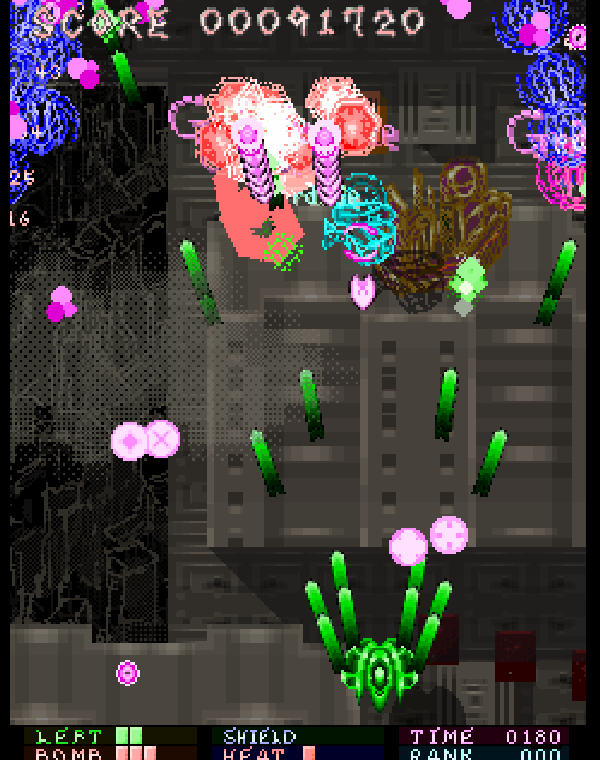 must control as they bravely take on waves of enemy Mechas. Mecha Ritz: Steel Rondo offers a selection of up to 12 playable good guy Mechas and exciting unlockables that include branching pathways and multiple different game endings to keep players entertained. The game’s colourful visuals celebrate retro games by marrying pixel art with vector graphics, but it’s the original FM synth soundtrack that will transport players right back to the Space Invaders parlours. Characterised by an uplifting, blissfully energetic techno beat, Mecha Ritz: Steel Rondo’s OST features 36 different tracks and digital sound effects that really engage the senses and let players feel the pure adrenaline that is unique to shmup games. When you take a glance at this run, you feel that same undefinable thrill that used to be accessible only at arcades before home consoles became king. Indeed, the pervasiveness of shmups isn’t what it used to be, but they are slowly building a new fanbase on PC. They are being reborn. During my short playthrough of Mecha Ritz: Steel Rondo, it quickly became apparent that I hadn’t enjoyed a shmup so much since Crimzon Clover WORLD IGNITION. I had forgotten how much fun it could be, blitzing baddies and desperately trying to stay alive in a realm where torrential downpours of bullets constantly keep your blood rushing. A world without humans might sound pretty grim, but a world without shmups? Inconceivable.

Mecha Ritz: Steel Rondo is not only an exciting tribute to a classic era, but a calling to a niche market that is craving bullet hell action, whether it be in a new format or a more faithful reconstruction of the original shoot ’em ups. What are your thoughts about Mecha Ritz: Steel Rondo? Is Veloce a destructive genius, or just a poor, misunderstood lass? Let us know in the comments section below.

Mecha Ritz: Steel Rondo has been successfully greenlit on Steam and is expected to release this May. In the mean time, make sure to follow Hanaji Games on Twitter to keep up to date with their latest news and developments.