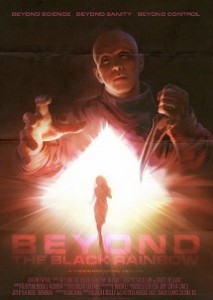 If any of the many 1980s-synth-homage bands out there right now need a music video they should call Panos Cosmatos immediately. His Beyond the Black Rainbow, while failing to serve much feature-length cinematic purpose, is the perfect vehicle for a 3 ½ minute, leather-clad, red-saturated, Knight Rider-esque, video accompaniment.

Unfortunately, Beyond the Black Rainbow runs 110 minutes (making it, by my count, about 106.5 minutes too long). The plot, which mixes a bit of horror and science fiction references including

Cronenberg, Argento, Kubrick, and Lucas, into its plodding pace, is certainly secondary to director Cosmatos’ visuals. A mad scientist Barry (Michael Rogers) keeps a young, mysterious girl Elena (Eva Allen) locked in an equally mysterious, sterile labyrinth. Barry’s got some issues. He’s also got a dark past, personified by his former mentor Mercurio (Scott Hylands), whom he now injects with drugs on a regular basis.

Cosmatos doesn’t seem to care much for his own script. He instead focuses on an overwhelming amount of close-ups, which contribute to the claustrophobic feel of the piece, an obviously digitally manipulated image-veneer, a pulsing, bass-driven soundtrack, and color schema that frequently bathes the entire frame in variations of red.  Fine visuals at times, the problem is that these don’t add up to much. What seems to want to be a partly comedic, partly philosophical treatise on…something…turns into a race for which actor can move the slowest and emote the least.

It’s difficult to tell whether the close-ups, which become increasingly tiresome, are a result of Cosmatos’ desire to intentionally cramp the space of the film, or of set limitations. To his credit, the wide-shots at the end of Beyond the Black Rainbow do feel liberating, though by that time it’s far too little, and far too late.